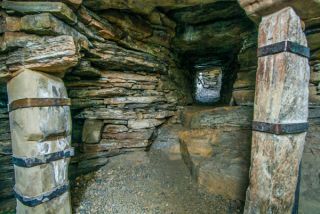 Rennibister Earth-House
Rennibister Earth-House is a curious Iron Age underground passage and chamber standing in a farmyard near Finstown. Though probably not intended as a burial chamber, the remains of 18 human skeletons were discovered in the chamber when excavated.
Despite the name, 'earth houses' are not made of earth, but of stone, and they are not houses but underground passages lined with stones, usually located close to stone buildings above ground. This suggests that the earth-houses might have been used for storage purposes, or possibly as refuges in times of trouble.

The earth-house at Rennibister dates to about 400 BC. It is small compared to the very large passages on the mainland, particularly in Angus and Perthshire. The passage is about 22 feet long, with a chamber at the end of the passage. This chamber is supported by two upright pillars and has several recesses, or alcoves, built into the walls.

When the earth-house was excavated in 1926 the scattered remains of human bones were found on the chamber floor. When the bones were examined they proved to belong to 6 adults and 12 children, but there is no clear evidence of how they died or why their bones were interred here. Rennibister is the only earth-house on Orkney with burials, and it seems possible that they were put here much later than the construction of the passage.

Visiting
There are absolutely no facilities at Rennibister; just an access hatch in the middle of the farmyard. It is pretty much essential to bring a torch to see underground, but once you get past those challenges it is actually quite an interesting site, and will certainly appeal to families with children who like secret hiding places (I speak from experience!) 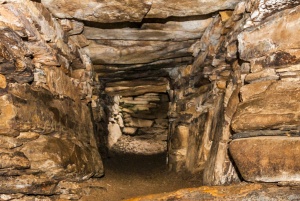 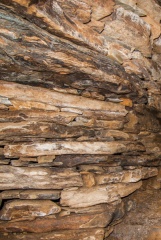 Stonework of the
chamber wall

Nearby accommodation is calculated 'as the crow flies' from Rennibister Earth-House. 'Nearest' may involve a long drive up and down glens or, if you are near the coast, may include a ferry ride! Please check the property map to make sure the location is right for you.

The Rhiconich Hotel - 80 miles
Lairg, Highlands and Islands
Stay from: £48.00