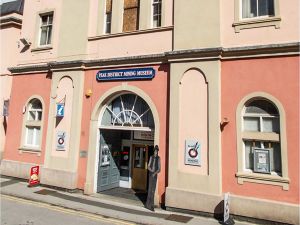 Peak District Lead Mining Museum
Located in the former Pavilion Building in Matlock Bath, the former Pump room of Matlock's spa days, this fascinating museum tells the story of the area's lead mining history from Roman days to the present. There are extensive displays of mining equipment, including pumps, as well as displays showing what a miner's life was like, and models of lead workings.

See mining equipment and learn about the techniques used by miners to extract the precious ore from the earth. Then there are old mining customs and laws governing the miners. One of the best exhibits is the pump-gear once used at the Wills Founder shaft in Winster. The mechanism was rescued from the redundant mine in 1976.

See a huge collection of minerals, including oakstone and fluorspar, as well as pumping engines, and tools used to process minerals. Then there are personal objects owned by miners, such as traditional mining clogs, tally boards, and the 'bradder' hat worn by lead miners. Other mining ephemera includes a self-tipping wagon for transporting ore, shackles and chains, and a battered 18th-century ore wagon. More ancient artefacts include a Roman smelting hearth discovered near Duffield.

The museum has a wealth of old photographs, maps, and archival documents. See explosives boxes, detonator tins, and hollow cow horns used to carry gunpowder. The museum is also expanding its collections to include items covering the local history of Matlock Bath.

One of the most popular exhibits with families is a recreated lead mine, so families can experience what life was like for miners, and how children were used in this dangerous occupation over the years.

But you don't have to settle for a mock-up of a mine; how about exploring the real thing? That's what you can do here, for the museum is run by the Peak District Mines Historical Society, which also owns the old fluorspar working of Temple Mine. Through the museum, you can enter the old mine tunnels and experience for yourself what life in the mines was all about.

The museum can also arrange visits to the Magpie Mine near Sheldon.

This delightful, stone-built period cottage is situated within walking distance of Matlock Bath and can sleep four people in two bedrooms.
Sleeps 4