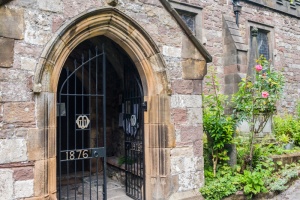 A pretty 13th century church perched above a high cliff, St James has reputedly the highest chancel in England, with the chancel raised 7 steps above the nave floor. The striking west tower is 14th century and is adorned with carvings of grotesque figures.

On the base of a column in the north aisle is a peculiar carved figure known as the Bonsall Imp, or the Little Devil. What is really odd is that the location means the figure would have been under ground level at one time, out of sight.

Why was it made? One theory is that it commemorates the lowering of the nave in the 14th century. When the nave was lowered, it exposed the column bases, which are uncommonly large, for they probably did double purpose as foundation stones.

The lowering of the nave means that there are seven steps up to the chancel, a fact which gives Bonsall's church its claim to fame; having the highest chancel in England. I confess I was a little unclear on what that meant when we visited St James, and I half expected to see a chancel that towered above the nave like a cathedral. But no, it is as mundane as a very large drop between the chancel and the nave below. 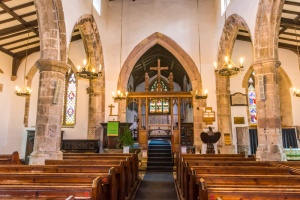 Looking up the nave to the 'high' chancel

Also in the south aisle are a pair of medieval grave slabs, now standing upright near the altar. The slabs were removed from the church during restoration work in 1863 and stood for many years in the garden of a churchwarden named John Coates before being returned. The restoration was certainly necessary; a report in the Derby Mercury of 12 August 1863 says that 'This old building had been suffered to fall into a most unparalleled state of dilapidation through long continued neglect'. 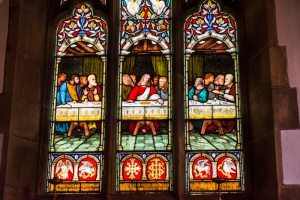 Coates was also involved in another episode of historic objects from St James church. In addition to the medieval grave slabs, he also kept the carving known as T'Owd Man of Bonsall, an early medieval depiction of a miner. It was taken from Coates, presumably with his permission, and built into the wall of Wirksworth church, where it is today.

Despite halfhearted attempts to get T'Owd Man back, residents of Bonsall have to make do with an exact replica, set into the wall of the bandstand near the medieval market cross, a minute's walk from the church.

Aside from the curiosity of the high steps from the nave to the chancel, the Bonsall Imp, and the medieval carved slabs, there is an old iron-bound alms box attached to a nave pillar, and what appears to be an ancient wheel-head cross on a window sill behind the south aisle altar. The font is a very simply octagonal one, probably Early English in date.

Look for the unobtrusive wall monument to Henry Ferne (d. 1723), who served as Receiver General under both William and Mary, and later, under George I, and a late Victorian memorial window to Mary Woodiwis, who died in 1871.

Self Catering near Bonsall