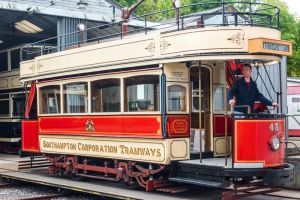 A fascinating step back in time, and a treat for nostalgia buffs. Crich Tramway Village is a restored historical village that is the home of the National Tramway Museum. Regular tram journeys leave every few minutes for journeys through Crich's cobbled streets and along the heights overlooking the Derwent Valley.

Many of the period shopfronts along Crich's main streets have brought here from other towns and villages around the country, to create a sense of tradition and nostalgia.

Visitors can view exhibitions on all aspects of the historic trams on display, and see old trams being restored in the Workshop Viewing Gallery. The Tramway Museum also has a variety of themed events throughout the year, including a 1940s weekend and classic car days.

You can take unlimited journeys on historic trams, from the village to the line's terminus at the Glory Mine. The exact trams that are running each day may vary, but when our family visited in mid-September we rode on the 1901 London United Tramways car 159, a 1927 Oporto, and a 1919 Glasgow Corporation Tramways model 1068. 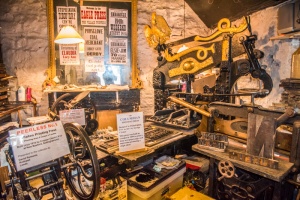 Inside the historic Eagle Press

One end of the line is the Glory Mine, a 19th-century lead and fluorspar mine. From the tram stop, you can take a lovely walk to the top of the hill overlooking the mine, to the Sherwood Foresters Memorial, a slender column that looks a bit like a lighthouse. The memorial is free to enter, and the view from the top over Crich village is superb.

If you take the tram south from the Glory Mine stop you come to the Wakebridge stop, where there is a mining exhibition and paths to a woodland walk and sculpture trail. Another stop brings you to a Victorian bandstand and a small park near the entrance. The main tram stop is Crich village itself, which is the real highlight of a visit.

The village is a mix of historic buildings, including the Red Lion Hotel, which serves restaurant meals, a tearoom, and a traditional sweet shop. Near the shop is a restored 19th-century press, with a fascinating array of historic printing presses and typographic equipment. Across from the Press is the 18th century Assembly Rooms, brought here from Derby and rebuilt to act as an exhibition area.

The Assembly Rooms were built in 1765 and was one of the major focal points of Derby society until 1974 when it was taken down, brought to Crich, and reassembled. It was opened in 1976 by HRH the Duke of Gloucester. Exhibitions vary, but when we visited the Assembly Rooms was hosting a display on the story of women working the trams during WWI when much of the male workforce joined the military. It was a fascinating glimpse of social history, and foreshadowed the events of WWII when more women took over traditionally male jobs.

Beside the Assembly Rooms is the George Stephenson Discovery and Learning Centre, where you can learn about the history of trams in Britain and around the world. Though much of this area is geared towards children, it really does a good job of showing how trams were built, the problems they were meant to solve, and the lives of the people who made trams to widespread throughout Britain. 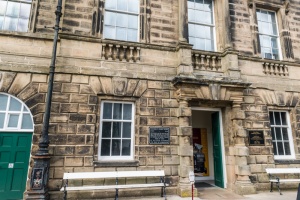 Next to the George Stephenson Centre is the Workshop Viewing Gallery, where you can look down into the huge workshop where volunteers are helping rebuild trams in the museum collection. Beside the workshop is the Tram Depot, where a large selection of restored and partially restored trams are arranged inside a massive structure the size of an aircraft hangar. You can walk among the trams, though you can't climb aboard.

The final, and for me the most interesting part of the Crich experience, is the Great Exhibition Hall, another huge hall containing still more historic trams. The trams here do not appear to be undergoing restoration, but you can step aboard several of them to take a closer look. The trams are loosely arranged chronologically, so you can trace the development of styles over time. For me, some of the most eye-catching examples were the most recent ones, particularly the 1930s Art Deco style tram.

What is remarkable is just how many unique styles of tram there were, from single to double-decker, enclosed and open top, and trams built for special purposes, such as an open-top parade tram built for Blackpool, and a fascinating tram created as part of the WWI recruitment effort, with signs on the sides encouraging men to join up.

Crich is a place you will want to take your time, and believe me, you'll end up taking more time than you had bargained on; its a fascinating place to visit. You don't have to know anything about trams to enjoy a visit. I certainly didn't, but I came away with a real appreciation for trams and their role in our heritage. 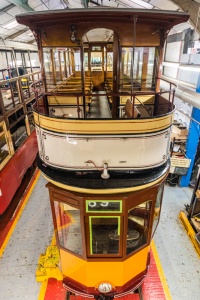 Trams undergoing restoration
in the Workshop 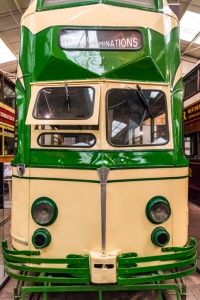 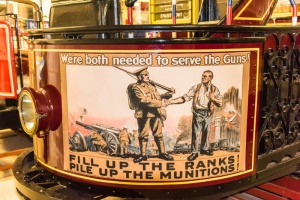 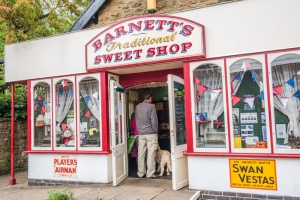 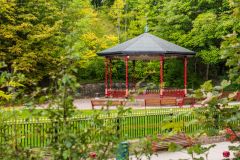 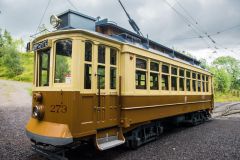 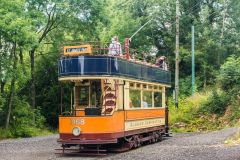 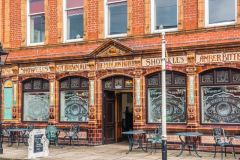 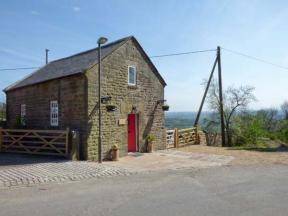 This converted chapel is set in the grounds of the owners' home, located in the rural hamlet of Wheatcroft and can sleep two people in one bedroom.
Sleeps 2 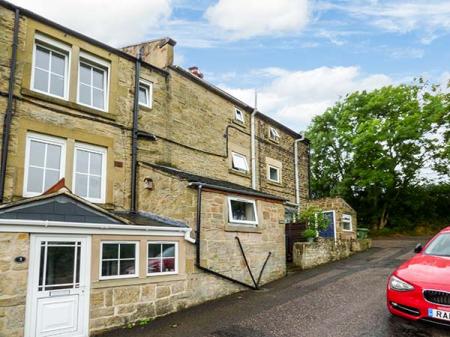 This lovely stone-built mid-terrace cottage is in the village of Fritchley near Crich and sleeps six people in three bedrooms.
Sleeps 6