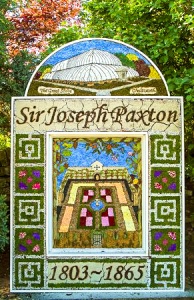 The custom of well dressing in Derbyshire dates back at least to Celtic times, and probably had its roots in a celebration of thanks for water. The pagan ceremony lost importance as Christianity gradually took hold, but it never died out completely.

The earliest recorded well dressing in Derbyshire was at Tissington, in 1349, and may have been a ceremony of thanks for surviving the Black Death which was sweeping Europe at that time.

Modern well dressing takes place in over 70 towns and villages throughout the county. Each dressing is a real cooperative effort, taking teams of as many as 20 workers seven days to create a work of art that will be exhibited for only a week. Local schools keep the tradition alive by teaching children to make their own well dressings.

The dressings can best be described as a multi-material mosaic made from a startling variety of natural materials such as berries, flowers, and seeds. The subject matter of the mosaic is as varied as the materials and may be anything from a conservation message, a religious theme, or a memorial for a native of the region.

For example, see the main photo on this page, where the dressing (at Monyash) is a memorial to Victorian architect Sir Joseph Paxton. Another image shows the well dressing at Hartington, where the theme for the year was the women's Land Army during World War Two.

Most of the well dressing arrangements adorn actual wells or fountains, but some, such as those created by school children, may be in other public places. For example, we found an example by the children of Hartington erected beside the village war memorial.

The resurgence in popularity of the well dressings has led to a return of other traditions, such as maypole dancing and flower festivals, which are often held in conjunction with well dressings.

Since the well dressings only last for a week, you'll need a schedule of when each participating village will have its dressing if you want to see them. A schedule is available at the Peak District web site at www.visitpeakdistrict.com and in the annual Peak District Visitor Guide, available from Tourist Information Centres throughout the area. 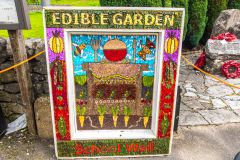