HERITAGE HIGHLIGHTS:   A good example of a traditional market hall 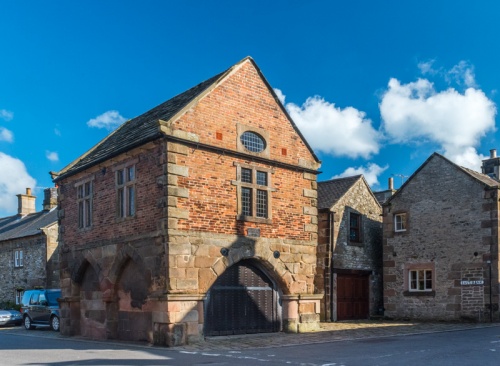 The striking Market House stands almost in the centre of the road through the pretty village of Winster. No one knows exactly when it was built, but the National Trust suggests it was erected in the 16th century, while most other authorities seem to suggest a later date, perhaps 17th or 18th century.

The latter date makes sense, for it seems that Winster was not granted the right to hold a regular market until the 17th century. Having said that, the wide, arched entrance certainly looks like it could be earlier!

It stands 2 storeys high, with the upper sections in red-brick, set upon a base of massive stones. The upper floor was probably built originally of timber.

The Market House was built to serve as a local market, with dairy sold on the upper floor and miners and general traders using the ground floor.

The ground floor was originally open, with an area for conducting business under shelter on the ground floor, with a series of 5 arches supporting the upper storey. You can see where arches were later filled in, probably between 1795 and 1855, when the thriving settlement fell upon hard times, and trading dwindled.

The Market House was purchased by the National Trust for the princely sum of £50 in 1906 and was the first Trust property inside the Peak District National Park. 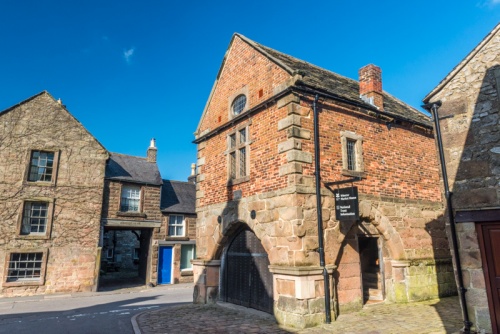 The view from the side

The property is unmanned, with an open doorway at ground level leading directly to a stair up to the first floor. The entire first floor is given over to an exhibition on the history of Winster, including a scale model of the village in a glass case.

Much of that history relates to lead mining, for Winster was a centre for mining since Roman times. During the 18th century, a mining boom saw the population explode, turning Winster into one of the largest and busiest towns in the county, with a population of over 2,000. Unfortunately, that prosperity did not last; as the mines drove deeper into the earth they encountered serious flooding problems, and one by one they were forced to shut down. The last local mine closed in 1938, but long before then Winster had dwindled from a bust town into a sleepy village.

It is well worth exploring the village of Winster on foot. The entire village is a designated conservation area, and as you explore it is easy to see why. From the Market House the narrow, winding lanes rise up the steep hill, with period cottages jostling for position by the roadway.

Almost across from the Market Hall is Winster Hall, once the residence of historian and archaeologist Llewellyn Jewitt. The Hall is said to be haunted, though it is hard to imagine anything so untoward happening to disturb the peace of the village today.

Winster is best known for two things; its local Morris Dancers, who perform traditional dances all over the country, and an annual Shrove Tuesday Pancake Race. The race began as a harmless distraction for children during WWII, but has since grown to be quite a 'serious' affair, with strict rules about pancake batter! You can learn more about the Pancake Race and the Morris dancing in the heritage display inside the Market House.

Self Catering near Winster