HERITAGE HIGHLIGHTS:   Incorporates a historic corn mill and mine workings 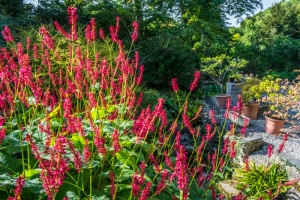 Cascades Gardens are built around the ruins of an old corn mill, and extend for four acres along a dell under a high cliff. There are old mine workings running into the cliff, and you can explore one of the mine tunnels.

The water channels that supplied the mill have been incorporated into the garden design, with paths beside the leat stream. Beside the garden is a lovely Georgian house where the owners live. The house also offers bed and breakfast.

The site was formed in the mid-18th century when the area was developed to feed a corn mill beside Bonsall Brook. The brook also powered a colour mill, a joinery mill, and a mill for polishing and shaping the rare Blue John stone.

It was developed in its current form from the 1990s, when owner Alan Clements used the historic setting to design a new garden, influenced by Hidcote (Gloucestershire) and Great Dixter (Kent), among other historic gardens.

The garden is arranged as a series of linked areas, or rooms, decorated with carefully placed urns and statues. Some of the features include a collection of single and double hellebores, chosen for their ability to survive the cold winters. Another feature is a collection of unusual herbaceous perennials. 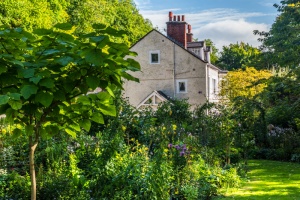 The Georgian house from the garden

Bonsall Brook runs gently into a small pond, planted with water-loving and bog plants. A causeway passes over the centre of the pond and features a statue of Andromeda chained to a rock.

The Brook divides into two channels, one flowing on the relatively flat garden centre and the other becomes the mill race and flows over a small cascade that gives the garden its name. The Brook also provides natural grit deposits that are gathered and used to make gravel paths.

The garden is open regularly during the summer months and by appointment at other times of the year. It is also open for the National Garden Scheme open days for charity. There are regular gardening talks and a nursery garden for plant sales. Cascades Gardens were featured on BBC East Midlands Today. 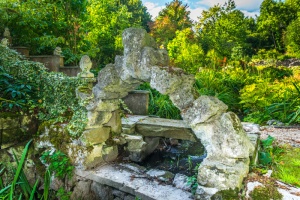 The garden is not signposted from nearby roads - at least we didn't see any tourist signs - but there is a signpost by the entrance on Clatterway. There is a small charge for entry, and when we visited there was no ticket kiosk, just an honesty box by the entrance. The layout is interesting; it is quite narrow and long, bounded by the road on one side and cliffs on the other.

Though small, it is a garden of surprises, with beautifully designed separate rooms arranged to unique themes. It is laid out on several levels, taking advantage of the sloping site, and each level flows seamlessly into the next.

To my eyes the best part of the visiting experience was the water features, particularly the gravelled paths leading along the old mill race to the cascade. A trail also leads from the main garden area up the hillside to a vantage point looking down over the entire site, which really helps give an overview of how the garden is laid out.

Do take the time to explore Bonsall village; it is full of picturesque 18th-century cottages and winding lanes. There are a pair of old pubs and good access to walking trails along the hills, and the 13th-century church of St James is well worth a visit.

Bonsall also has an annual well-dressing ceremony. John Wesley preached from the steps of the cross in the market place, and the village was an important centre for frame-knitting, producing hosiery fed by Richard Arkwright's mills in the valley below. 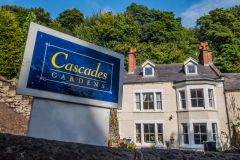 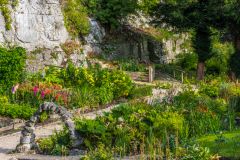 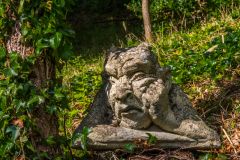 More self catering near Cascades Gardens

Self Catering near Bonsall