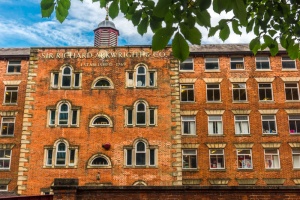 Masson Mills is a historic complex of 18th and 19th-century cotton mills begun by Sir Richard Arkwright. The Mills form part of the Derwent Valley Mills World Heritage Site, and house perhaps the largest display of historic working textile machinery in the world.

Notice the key word in that last sentence; 'working'. Unlike many historic mills, a large number of the machines on show at Masson are still working, and are used to create textiles for sale and in demonstrations for visitors. Some of the equipment is original to Masson Mills, and some has been brought in from other historic sites around Britain.

Among the historic features to explore are the original 1785 bell that summoned workers, plus some of the oldest functioning looms in the world. You will see carding engines, cotton mules, pirn winders, and 'The Devil', a huge machine for breaking open raw bales of cotton. The Devil used sharp rotating spikes, and in the days before Health and Safety, workers all-too-often lost limbs, or their lives, when operating The Devil.

You can also explore the original Museum Office, with a model of Arkwright's pioneering water frame, an 18th-century hand-powered pirn winder, and an 18th-century gear-cutting machine that may have been used by Arkwright himself. 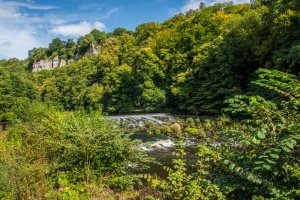 One very unusual feature inside the museum is Richard Arkwright's horse tethering ring. It seems that Arkwright would ride his horse into the mill building if the weather was inclement, and tie it up at this iron ring set into the wall.

Masson Mills stand on the west bank of the River Derwent, south of Matlock Bath, at the entrance to the Derwent Valley Mills World Heritage Site. The cotton-spinning mills were built in 1783 for Sir Richard Arkwright, who used water from the river to power his looms.

Arkwright pioneered the use of a water frame to drive his looms, and he has been called the 'father of the factory system'. He built his first mils at Cromford in 1771, within walking distance of Masson, but in 1783 he decided to build a larger mill to the north, to take better advantage of the River Derwent's water flow.

There was already a paper mill on the site, but Arkwright had big plans, and built a large weir across the Derwent to build up a head of water for the paper mill and his new cotton mills. The design of the weir is unusual, for Arkwright built it in a convex for rather than the more typical concave.

The weir fed water to a single waterwheel. In 1801 a second wheel was added. Arkwright's original water-powered design has since been modified, and now the river powers hydroelectric turbines which supply renewable, green energy to the entire Masson site. 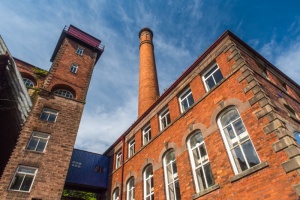 The complex of mill buildings was centred on a 5 storey building of brick and gritstone, designed in 21 bays, and reaching 43.8 metres in length. A 6th storey was later added. The clever design of the main mill building included a central stairwell projecting out from the building. As a result, the production floors could be larger, with better traffic flow.

More mill buildings were added by 1835, though some were later torn down. The iconic tower that looms over the main mill building was erected in 1907 and was built by Farnsworth Brothers of Bonsall.

In 1897 Masson Mill was absorbed into the English Sewing Cotton Company and later transferred to a subsidiary, the Sir Richard Arkwright and Company Limited.

Most of the focus at Masson Mills seems to be on the shopping village, which is directly beside the historic mill. That's a bit of a shame, as the Mills are really very impressive and deserve more attention.

The whole site is dominated by the striking cylindrical chimney that towers over the surroundings. Once inside, you receive a pamphlet with a map of the site, with numbered rooms. You are free to wander, and there are interpretive panels throughout the site to explain each part of the milling process and how the various rooms were used. 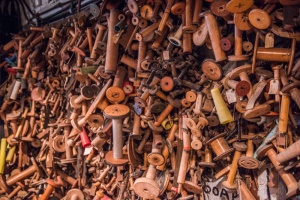 There are regular demonstrations of weaving, using a variety of machines, some historic and some modern replacements. It is extraordinary to see the speed at which the weaving looms operate, but even more impressive is the noise they make. You can only imagine what it would have been like when all the looms were operating at once.

One area that I enjoyed was the collection of wooden bobbins. The signs in this cluttered chamber suggest that it is the largest single collection of bobbins in the world, with many unique designs made as one-offs for specific companies around the world.

Do take the time to visit Cromford Mills, Arkwright's first mill, just down the river, and his family home of Willersley Castle, on the hillside overlooking Cromford. 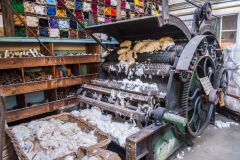 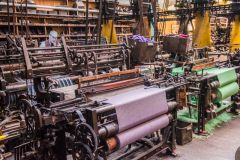 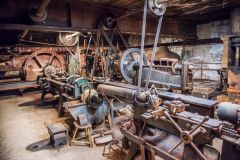 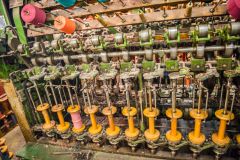 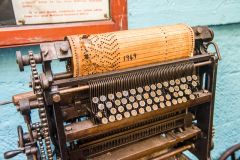 More self catering near Masson Mills

Self Catering near Matlock Bath