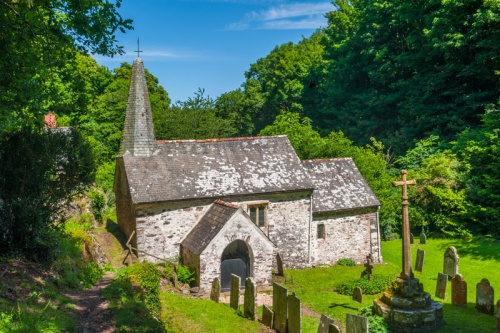 Said to be the smallest parish church in England, seating only 33, St Beuno's can only be reached on foot. The church is sited in a quiet combe looking out to sea. A leper's squint is set into the north wall, a relic of the 16th century when a leper's colony was sited in the nearby woods. The church boasts a Saxon font and carved head that is part-cat, part-man on the north window.

Though the site is remote and peaceful now, it was not so peaceful in 1280, when the chaplain of Culbone was indicted for murder, 'having struck Albert of Esshe (Ash) on the head with a hatchet, and so killed him'.  It is hard to imagine anything so untoward happening in this peaceful place now!

The church is recorded in the Domesday Book of 1086 and is almost certainly pre-Norman. It is just 35 feet long, with the nave taking up 21 feet of that length. Even though there is no road access there are still regular services at the church.

While the body of the church is at least 11th century if not older, the porch is probably 13th century, and the nave was rebuilt in the 15th century. Inside are box pews, including a 17th-century pew for the squires of nearby Ashley Combe House. There is a very simple font that is almost certainly Saxon, and a small window in the south wall of the chancel of a similar date. The window frame is carved from a single block of solid sandstone.

Access is the big challenge for visiting Culbone. The South West Coast Path long distance trail passes the church, but if you are coming by car you'll have to find a parking spot along the track to the church, just off the A39, opposite the pub. From there it is a 1 1/2 mile walk through glorious woodland to the church. The reward for your exertions is a lovely view across the Bristol Channel. 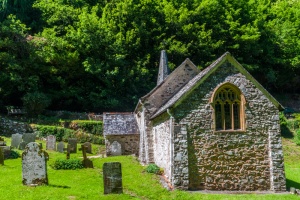 St Bueno's from the east

Alternatively, you can park at Porlock Weir (paid parking) and follow the South West Coast Path. The path is signposted 'Culbone Church' and starts behind the hotel. It crosses a farm field, then enters attractive woodland, rising up the hill to the thatched gateway to the Worthy Estate.

Rather than go up the estate road the trail turns towards the coast and passes through beautiful woodland, with glimpses of the sea through the trees. Culbone will eventually come into view on your right, half-hidden in a dell by trees rising up on all sides.

I say 'eventually' on purpose, for there seems to be a discrepancy in the signposted distance between Culbone and Porlock Weir depending on which side you start from. In Porlock Weir the signs say 1 1/4 mile to Culbone, but from Culbone they say 2 miles to Porlock Weir. Having walked it both ways I'm pretty certain the 2 miles sign is closer to the truth. It took me 1.5 hours to walk from Porlock Weir and back, including time spent exploring the church.

I've visited Culbone from both directions, and I prefer the walk from Porlock Weir. Yes, you do have to pay for parking, but the walk is very pleasant, and mostly level except for the very beginning.

As for Culbone itself, well, the location is an absolute delight. On a sunny summer day, it seems a million miles from anywhere, a place to relax and sit in the quiet churchyard listening to the birds sing.

The most interesting features of the church for me are the font and the chancel screen. The font is fascinating; I've heard it described as both Saxon and Norman. Having seen it twice I'm inclined to think it might be late Saxon, but whatever the exact date it is a beautifully carved example of ancient stonework. The font bowl stands on a much later base, probably Victorian.

The chancel screen dates to the 14th century and has some very attractive carved panels. On the south side of the nave in front of the screen is the boxed pew built for the Lovelace family of Ashley Combe house. The chancel arch itself is 13th century.

One peculiar feature is the conical spire, built of deal and slate. We don't know when it was built, but it was probably in place around 1810. A local tradition says that the spire was originally atop Porlock church, and was blown off in a storm and carried all the way to Culbone. In the churchyard is a modern cross, which stands on a 15th-century base.

As far as I could tell there are just 2 houses plus the church remaining in Culbone. It really is an incredibly peaceful, secluded spot. 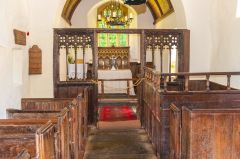 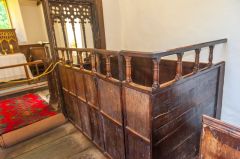 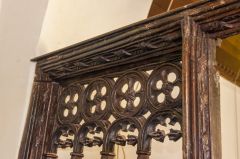