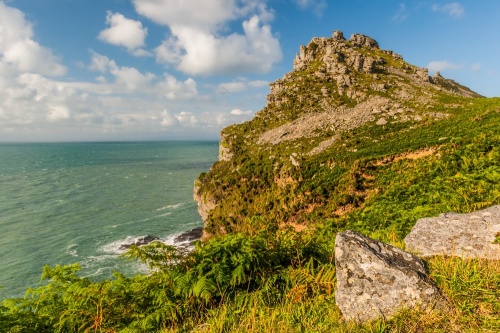 The Valley of Rocks is a ruggedly beautiful U-shaped valley in northern Exmoor running parallel to the North Devon coast immediately west of Lynton. The valley is known for its herd of feral goats, who roam the craggy rocks overlooking the coast. Jagged rocks line both sides of the low-lying valley, and the view from the top of the cliffs is stunning.

The sea cliffs that line the valley are amongst the highest in England. The most prominent peak that rises above the valley floor is Castle Rock, and if you follow the path that winds to the top of Castle Rock you will be rewarded by sweeping views over the Bristol Channel. Beyond Castle Rock, a path runs down to Wringcliffe Beach. 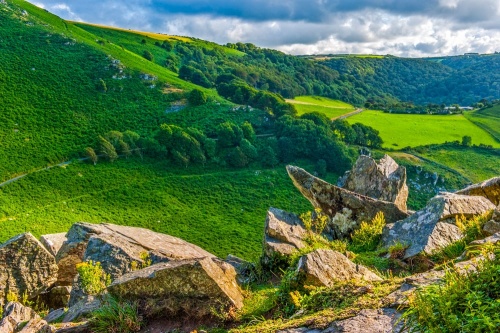 The valley from Castle Hill

Geologists seem uncertain as to how the Valley of Rocks was formed. The most common theory is that the East Lyn River originally flowed along the valley on its way to the sea further west. Over millennia, the river made a new channel, breaking through the sea cliffs, leaving the valley bottom dry.

Another theory suggests that the river always ran as it does today, but that during the last Ice Age a glacier blocked the valley mouth, creating a lake. The lake overflowed, and over time created a new channel; the valley we see today. When the ice melted, the dry valley was left behind.

The Valley is home to the Lynton Beds, fossil-rich layers of Devonian rocks that are amongst the oldest in Devon.

We may never know which theory is correct, but the result is a spectacular natural landscape of jagged rocks ringing a peaceful valley. 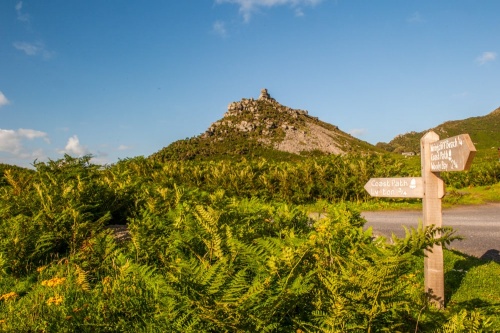 The Valley of Rocks is home to what must be one of the most beautifully-situated cricket grounds in the world, established by the Lynton and Lynmouth Cricket Club in 1876. We were fortunate to visit on a sunny summer day when a match was being played, and the setting was simply spectacular, with high, jagged cliffs rising above the grassy green ground on the valley floor.

The Valley of Rocks has links to several famous poets and writers. The poets William Wordsworth and Samuel Taylor Coleridge visited in 1797 and were inspired to collaborate on a prose tale titled 'The Wanderings of Cain', which, sadly, remained unfinished. Poet Robert Southey came two years later. Another poet, Letitia Landon, wrote of the Valley in 1831. Novelist RD Blackmore used the Valley of Rocks as a setting for his most famous work, Lorna Doone, published in 1869. 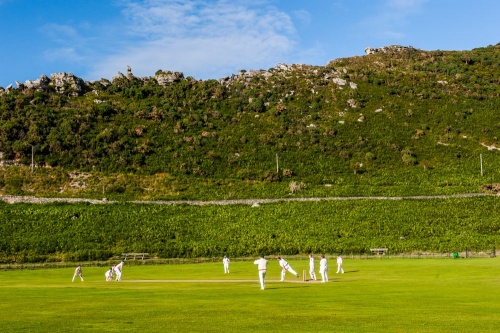 A cricket match in the Valley of Rocks

There were wild goats in the Valley of Rocks as early as the Domesday Book of 1086, but the herd we see today was introduced in the 1970s to replace an earlier herd that had died out. You can often see the nimble goats grazing on the seas cliffs.

Most visitors will use the car park at EX35 6JH, but if you are feeling energetic you can follow a circular walk that starts at the Lynton Cliff Railway station and follows the South-West Coast Path long-distance trail to create a loop of just under 3 miles (4.7km).

If you are driving, follow the brown tourist signs, which lead to Longmead. Follow Longmead west into the valley. At the eastern end of the valley is a parking and picnic area with public toilets. 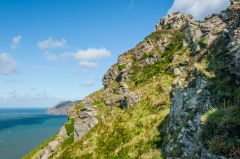 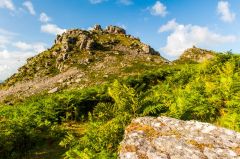 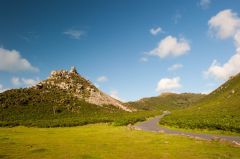 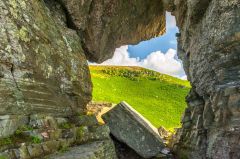 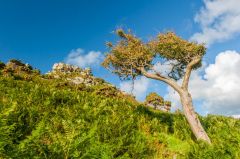 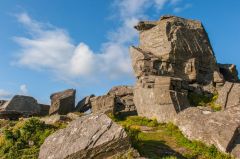 More self catering near Valley of Rocks, Exmoor

More bed and breakfasts near Valley of Rocks, Exmoor

Self Catering near Lynton