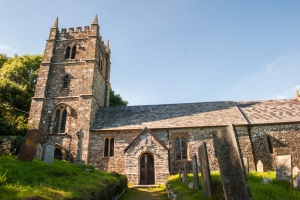 St Brendan's Church, Brendon
,p>The church of St Brendan sits on a sloping hillside well away from the village it serves. The history of the building is complex; what we see today dates from 1738, when an early medieval church at Cheriton was torn down and the materials used to build a new church here.

The Cheriton church was begun in the latter half of the 12th century, in the reign of Henry II. The church was granted to the Hospitallers, who already had a monastic settlement at Badgeworthy Water. The Prior of the Hospital of St John of Jerusalem, to give the order its full name, gave the church to William Bagworthy, and it passed down through the Bagworthy family until 1399, when it was given to the lord of the manor, Lord Harrington.

Traces of the monastic settlement can still be seen where Badgeworthy Water meets Hoccombe Water. The first recorded rector was James de Eyssedence, who was also Prior of the Order in 1299.

You will have noticed that the name of the church and the village are spelled differently. The church is dedicated to the 6th-century Irish missionary St Brendan, the patron saint of navigators. Brendan is a very popular dedication in the south west of England. 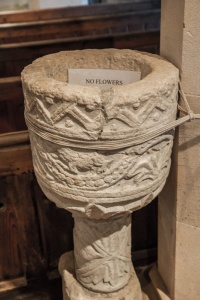 The name of the village, however, is Brendon, with an 'o'. It comes from the Saxon 'brun', meaning brambles, or the colour brown combined with 'dun', for a hill. So the village is named for a brown coloured hill, or perhaps a hill with brambles. Which came first? Did the monks dedicate the church to St Brendan because his name was similar to the name of the village, or was it the other way around?

The first church built by the monks was at Cheriton, some 2 miles away. You can still see a few overgrown stones from that early building.

The oldest object in St Brendan's church is the simple 12th-century font by the south door, probably brought from the earlier church at Cheriton. The font is made of local grit stone, with a cylindrical shaft on a square base, rising to a plain square bowl. But if the font is plain, the same cannot be said for a richly carved pillar piscina standing by the north arcade, with beautifully intricate carvings on the stem and bowl.

The piscina is shaped like a goblet, with two bands of carvings on the bowl, depicting foliage and beasts, with a zigzag pattern above. The stem shows more carvings of foliage. There is no indication of how old the piscina is, but the style of carving suggests an early Norman date. 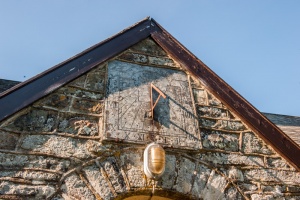 Above the south door is a royal coat of arms, painted on a board. The windows hold very good 19th-century glass, with the east window given by John Crick in 1884. A two-light window commemorates Lieutenant Alfred Schuster of the 4th (Queens Own) Hussars, who died in battle near Ypres in 1914. In the churchyard is a touching memorial to Frederick Beesley, who died in action in 1918 and was buried in France.

Over the porch is a sundial made of slate, dated 1707.

St Brendan's Church is usually open daylight hours. There is a wide layby opposite the church, and the views from the layby and the churchyard are simply stunning.

I wasn't actually planning to visit the church; I was driving by on my way to Cheriton when I came around a corner and saw it there, lit by the late evening sunlight. I just had to stop and explore, and I'm glad I did.

The piscina, or stoup, is simply wonderful, with intricate 12th-century carvings. It is fascinating to compare the richly carved piscina with the utterly plain font. Why was one so intricately carved and the other not carved at all? Its just one of those historical mysteries that makes exploring country churches so much fun! 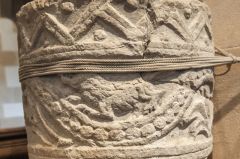 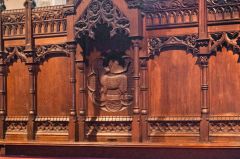 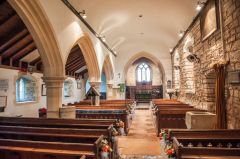 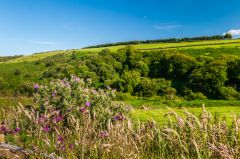