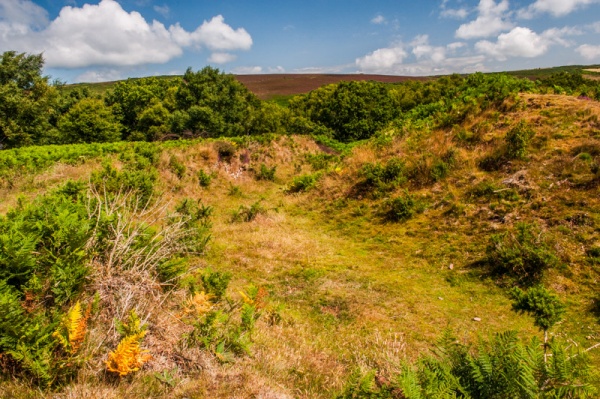 The banks and ditches of Bury Castle

Bury Castle is an Iron Age hillfort situated on a hill overlooking the pretty village of Selworthy, Somerset. A short but steep walk from the village through National Trust woodland brings you to the earthwork banks and ditches built to defend an Iron Age enclosure.

This is a multivallate site; that is, it is protected by more than one bank and ditch. It is possible that the earthen ramparts were added as an extra layer of defence to augment a timber palisade. Another interpretation is that Bury Castle was never intended as a 'castle', but as a settlement for a small group of people, perhaps even a single family.

Bury Castle was constructed as an earthwork with a pair of detached outerworks. The earthworks were built to defend an enclosure roughly 80m by 60m (about 3 acres), within an earth bank roughly 1.6m high, with an outer ditch measuring 1.5m deep. A single entrance on the northeast side, measuring 3m wide, controlled access to the enclosure. A small annexe, or outwork, adjoins the main enclosure to the west.

In the northeast corner of the enclosure there are remnants of stone building foundations. These foundations stand close to an old track entering the enclosure. The stone foundations suggest that the earthen ramparts may have been reinforced with stone from the start. A number of stones have been pulled from the bank and stacked to form a cairn. 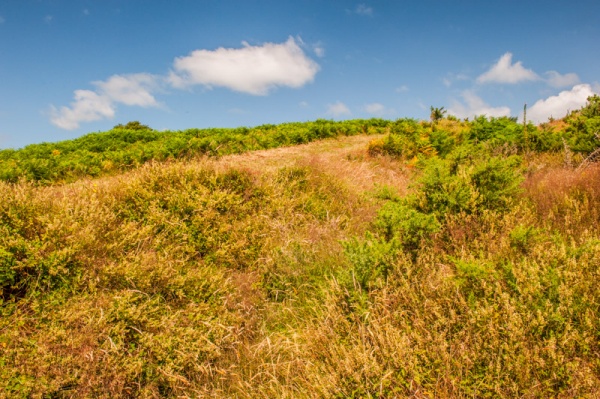 Looking across the earthwork banks

There are triple ramparts to the west and to the east the site is defended by a steep slope. A bank some 200m to the northwest may define an outwork of the main fort. Historic England records a second outwork 30m northwest from the main enclosure. The western end of this enclosure has been absorbed into a later field system and is now hard to distinguish from the field bank.

This crosswork ditch and bank were probably intended to provide a good place to watch over the approach to the site, which otherwise would have been hidden to people taking shelter within the main enclosure. Cross-works in a position to guard a blind uphill approach are common in other Iron Age sites in the area.

Access to Bury Castle is straightforward - if you don't mind a bit of a stiff walk from the base of the hill. There is an obvious footpath near All Saints Church in Selworthy. From there just follow the well-signed footpath as it climbs up the hill. The path is steep in places and was fairly muddy when we visited so iI would definitely suggest good footwear for the climb.

It took us about 20 minutes of fairly steep climbing to reach the hillfort enclosure. Unfortunately, there are no information panels to help understand the site. It is easy to follow the course of the banks and ditches, but making sense of the whole site is not so easy. It is great fun to explore the earthwork banks and ditches but to really get a good sense of how the Castle looks and how it takes advantage of the natural layout of the spur on which it stands you really have to look at aerial photographs.

The Bury Castle footpath connects to a trail leading from the village to Selworthy Beacon, making a lovely circular walk, much of it on National Trust land. 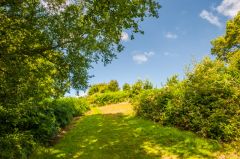 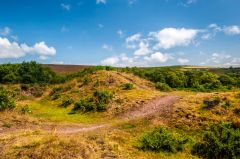 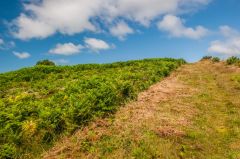 More self catering near Bury Castle