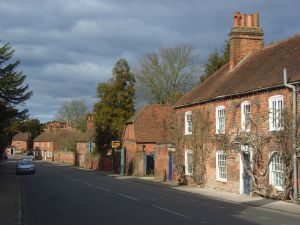 Aldermaston
Aldermaston is a quiet village in the Kennet Valley. the parish church boasts medieval wall paintings and the ornate Tudor memorial to Sir George Forster (1533). The Street features numerous attractive 17th and 18th-century worker's cottages, many of which are listed buildings. Keen gardeners will know that Aldermaston was the first place in Britain where the William pear variety was successfully cultivated, by the headmaster of the school.

The area may have been settled as early as the 2nd millennium BC, but the first written record comes from the 9th century. The Anglo-Saxon Chronicle mentions an estate here, and there was a manor established by the 11th century. Aldermaston formed part of the estates of Harold, Earl of Wessex, later King Harold, and was seized by William the Conqueror after the Norman Conquest.

William's son, King Henry I, gave Aldermaston to the Achard family, and it was they who built the first church of St Mary the Virgin here.

The parish church was built in the 13th century and retains some Norman stonework.

Aldermaston received a market charter in 1292, and there was also an annual fair dedicated to St Thomas the Martyr (Thomas Becket). The manor passed from the Achard family to the De La Mere family and then to the Forsters, who built the manor house just east of the main village. The manor house was destroyed by fire in 1843 and rebuilt in grand neo-Tudor style.

The main street through the village is rather conveniently called The Street. At the southern end of the Street is a small green with a Victorian drinking fountain built to honour Queen Victoria's Diamond Jubilee. For centuries the green hid a secret - a Roman well that was only rediscovered by accident in 1940 when a cow almost fell into the well shaft.

A Pub with its own Gaol

The 'local' is The Hind's Head, a former coaching inn built in the 17th century. The name comes from the crest of the Forster family, which features a hind. One unusual feature of the pub isn't apparent from the street, but if you go around back of the building you'll find a small lock-up gaol cell of brick, with a domed roof.

We don't know exactly when the gaol cell was built, but it was last used in 1865 to house someone who'd had a bit too much to drink. Unfortunately, the prisoner lit a fire to keep warm, and burned to death. It has remained unused ever since, but is open for the Heritage Days scheme.

Just outside the village is the Tudor manor of Ufton Court. Every three years the village holds a 'Candle Auction' at Christmas time; an unusual tradition whereby bidding on the rental of Church Acre lasts until a horseshoe falls from a tallow candle.

More self catering near Aldermaston >>

More bed and breakfasts near Aldermaston >>