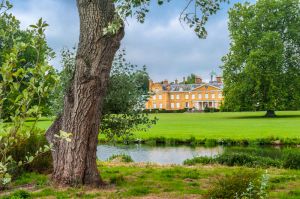 A largely Jacobean house with Georgian additions, Stratfield Saye was the home of the Duke of Wellington after Waterloo. Many of the furnishings were installed by the Duke. See the tomb of Copenhagen, the horse that carried Wellington at Waterloo.

Though the mansion at Stratfield Saye will forever be linked to the Duke of Wellington, the house itself dates back to at least the early 17th century. In 1630 Sir William Pitt, Comptroller of the Household to James I, built the core of the house we see today, and the nearby stables.

Pitt's original house was faced with red-brick, fashionable at the time, but by the mid-18th century fashions had changed. George Pitt, the 1st Baron Rivers, had the earlier brick re-faced with stucco. He also redesigned the parkland surrounding the house to adhere to the fashion for English landscape gardening.

The Duke's original plan was to tear down the Georgian house and build an opulent new house called Waterloo Palace elsewhere n the grounds. However, the cost of the Palace proved too great, and Wellington decided instead to simply renovate the existing house. 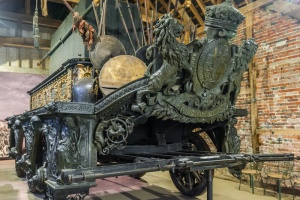 The central block was augmented over time with outer wings, and a large conservatory added. Wellington introduced what we today would consider essentials, but in the early 19th century would have been considered luxuries; he installed water closets in many of the bedrooms, carefully sound-proofed and elegantly finished. He also had central heating put in, powered by hot water radiators. Two of the original radiators can still be seen.

In the Entrance Hall are paintings of Wellington's military campaigns, along with family portraits. The floor is made from Roman mosaics dug up by the 2nd Duke from the remains of nearby Silchester Roman town.

The Gallery houses French furniture bought by the 1st Duke in Paris in 1817. The Library was the Duke's favourite room, and is as he left it in 1852. The decoration is by architect William Kent, designed around 1740.

The Drawing Room, with its gilded plasterwork, is stunning. The paintings on display come from the Spanish Royal Collection and were captured from Joseph Bonaparte by the Duke in 1813, after the Battle of Vitoria. When Wellington tried to return the artwork to the King of Spain, the king told him to keep them, so here they are on display in an English stately home. 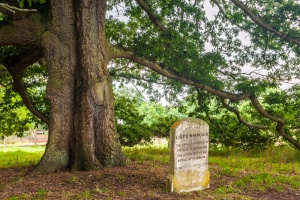 The grave of Copenhagen, Wellington's
horse at Waterloo

The gardens are a peaceful place, with a mix of trees and shrubs. There is an American Garden, and a recently restored rose garden laid out by the 1st Duke. Look for Wellingtonia trees, named after the Duke and introduced into Britain in 1853, the year after his death.

Also look for the monument to Copenhagen, the Duke's favourite charger, under a spreading tree in the Ice House Paddock. Wellington was in the saddle at Waterloo for 18 hours straight, so he must have had a real fondness for the horse.

According a story that one of the guides told us, when Wellington dismounted from Copenhagen following the battle, he patted the horse on its rump in gratitude. The horse, known for being high-strung, lashed out with a rear hoof and narrowly missed the Duke's head. In one moment of petulance Copenhagen almost managed to do what an army of French soldiers could not!

Copenhagen came to Stratfield Saye with Wellington and was ridden by the Duke and his children until his death in 1836 at the grand old age of 28. He was buried with full military honours.

In the Stables you can visit the Wellington Exhibition, covering the life and career of Arthur Wellesley, the 1st Duke of Wellington, with mementoes of his military career and his later life in politics. The collection includes weapons, drawings, and maps used by the Duke, but the centrepiece is the magnificent carriage used for Wellington's funeral.

The base of the ornately decorated carriage was made from French cannons captured at the Battle of Waterloo. The carriage was stored in the crypt of St Paul's Cathedral until 1981, when it was moved to Stratfield Saye. It is a remarkable vehicle, embellished with military symbols and the names of battles won by Wellington during his long military career.

I must add a special note about the experience of visiting the house. Admission is only by guided tour, and the guides were exceptional. It was a very long tour; one of the longest I've ever been on. In theory it was meant to last 1 hour but we were guided around the state rooms and regaled with stories about the Duke, his descendants, and the objects we could see around us for over an hour and a half. I left with a much deeper appreciation for the house, and, particularly, for the man behind the legend of the 'Iron Duke'. 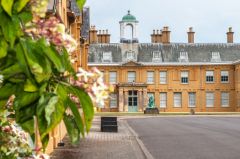 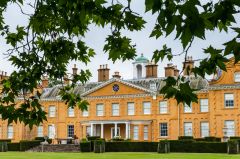 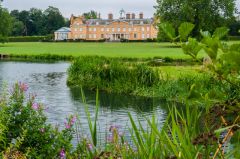 More self catering near Stratfield Saye >>