HERITAGE HIGHLIGHTS:   Memorials to the Dukes of Wellington 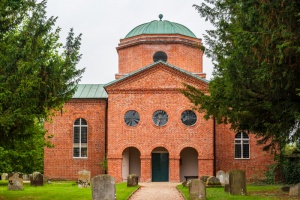 St Mary's is a lovely Georgian church of red brick, built by the Pitt family, owners of Stratfield Saye house, to replace an earlier medieval church. The 1st Duke of Wellington worshipped here, and his funeral hatchment hangs in the west gallery.

The first reference to a church at Stratfield Saye comes from the Domesday Book. The church was always connected closely to the four families who have held the estate since Norman times. The first was the de Saye family, who gave their name to the village. One of the de Saye's was named among the barons charged with ensuring that King John kept the promises he made in the Magna Carta (he didn't).

The second family connected to the original church here was the Darbridgcourts. The family gained royal favour when they supported Isabella, Edward II's queen, in her fight against her husband. Nicholas Darbridgecourt was one of the first Knights of the Garter under Edward III, and gained Stratfield Saye by marrying the family heiress in 1364. 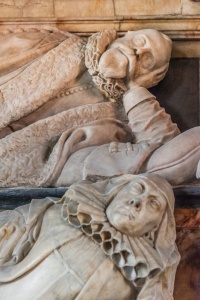 Why was it Built?

One of the excellent visitor guides to Stratfield Saye house told us that the family built stables and a real tennis court near the old church, but the sound of the horses and the thump of the tennis balls made worship rather difficult. Rather than adapt their lifestyle they simply had the old church torn down and built a new one further from the stables and the tennis courts.

The unusual design is in the form of a Greek cross, with equal length transepts, and an octagonal central tower, surmounted by a copper dome. The result was reviled in Victorian times, described as 'a monster of ecclesiastical ugliness'.

Outside the front entrance are four medieval grave slabs to the Darbridgecourt family, medieval owners of the Stratfield Saye estate, set into the floor. Three of them are very worn, but the other clearly shows the outline of a memorial brass. The antiquarian Elias Ashmole, whose collections form the core of the Ashmolean Museum in Oxford, made copies of the brasses before they became worn beyond recognition. 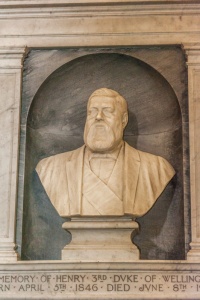 Just inside the entrance is a striking Victorian font in the style of Sir Christopher Wren. Both the west and north arms have galleries. he organ in the west gallery was donated by the 1st Duke in 1835.

On the south-west wall over the west gallery is the funeral hatchment for the 1st Duke of Wellington. The hatchment was raised outside Stratfield Saye house when the duke died, and later moved inside the church. The north gallery replaces the old manorial pew where the Duke worshipped with his family.

On his campaigns abroad the 1st Duke took as his private chaplain the Revd Samuel Briscall. On his return from the Napoleonic Wars, the Duke made Briscall the rector of the family church at Strafield Saye. He held the post until 1835. Briscall seems to have kept a poor watch on his purse, for by 1836 he was £500 in debt.

The Duke refused to make good the rector's debts - indeed he refused to speak to Briscall - so the rector was forced to leave his post. The Duke then appointed his own brother Gerald to be rector.

Gerald Wellesley later became Dean of Windsor and a great favourite of Queen Victoria. He was expected to become Archbishop of Canterbury, but refused the post. 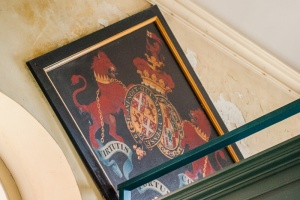 At the end of the south transept is a grandiose marble monument to Sir William and Lady Pitt, dated 1640. It is a work of remarkable detail, and one of the very few 17th century monuments signed by the sculptors. Nearby is a marble memorial to George Pitt, the 1st Lord Rivers, who built the current church.

You can see the church from the house, at the end of a short drive leading away from the main house entrance. You could be forgiven for thinking you could just stroll up to the church and see the memorials to the Dukes of Wellington after visiting the house. Unfortunately, there is no direct access from the house to the church.

Instead, you have to exit the estate grounds, drive around past the main visitor entrance, and then take the next estate road leading to the church. It seems a lot of trouble for visitors to the house to go through, but the extra trouble is worth it, for the interior of St Mary's is a Georgian delight, with lovely box pews and 18th-century furnishings.

Though most people will come to see the memorials to the Dukes of Wellington, the church is well worth visiting in its own right as an excellent example of Georgian style.

It is worth mentioning that the 1st Duke of Wellington is NOT buried here near his family home. The Iron Duke is buried at St Paul's Cathedral in London, but all but one of his successors are remembered here. The other exception is the 6th Duke, killed in action during WWII. 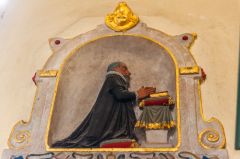 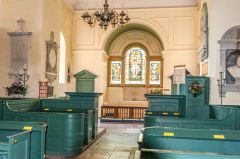 More self catering near Stratfield Saye