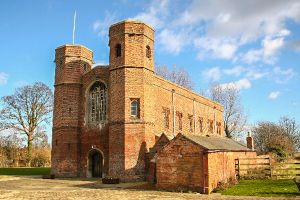 Wainfleet All Saints
There are several Wainfleets, All Saints, St Mary, and Tofts among them. The market town and port of Wainfleet All Saints stands beside the rivers Limb and Steeping, in the East Lindsey district. The term 'wainfleet' comes from a combination of 'wegn' and 'fleot', meaning a place where a wagon can cross a stream.

The origins of Wainfleet go back at least to Roman times; Roman coins have been discovered here, and a Romano-British settlement named Vainono stood near the current town site. The town certainly existed by 1086, when it is mentioned in the Domesday Book.

In the medieval period, Wainfleet was a busy port, but the silting of the River Steeping put an end to that, and as a result, Wainfleet is today a quiet and prosperous town.

Wainfleet is perhaps best known as the birthplace of William of Wayneflete, Bishop of Winchester and founder of Magdalen College, Oxford. In 1484 Bishop Wayneflete built Magdalen College School on Barkham Street. The College was designed to educate 7 local boys in Latin and Greek, and prepare the scholars to go on to Magdalen College.

From 1755 the original college concept changed and the College served as a simple elementary school, before finally closing its doors in 1966. It now holds a museum with a wealth of artefacts covering social history, agriculture, and Victoriana. One recent addition is a recreated Victorian era schoolroom.

The College was not Bishop Waynfleete's only contribution to his birthplace, for he was able to obtain a royal charter of incorporation in 1457.

There was a medieval church here, but it was torn down to make way for the current All Saints church in 1820, though the new church reused stonework from the medieval building. In the Market Place is a 15th-century Buttercross. John Wesley is known to have preached from the Buttercross steps.

Another historic structure - actually several structures - is Barkham Street, a terrace commissioned in 1847 by Bethlem Hospital and designed by Sidney Smirke in the same style as a number of Bethlem terraces in Southwark, London.

Just outside Wainfleet is an old mill which forms part of the original Bateman's Brewery. The brewery also incorporates a Georgian building known as Salem House. Bateman's is known for its advertising slogan, 'Good Honest Ales'.

Nearest Accommodation to Wainfleet All Saints:

More self catering near Wainfleet All Saints >>

More Hotels near Wainfleet All Saints >>

More bed and breakfasts near Wainfleet All Saints >>