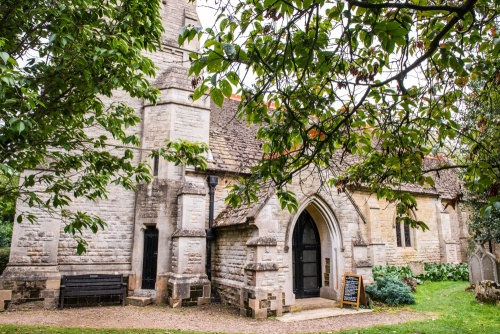 Tucked away in a leafy glade in the grounds of the National Trust's Gunby Hall is the delightful medieval church of St Peter. Though it is within the Gunby Hall grounds and has close links with the Massingberd family, former owners of the Hall, St Peter's is the parish church and is preserved and maintained by the villagers themselves.

The church dates to the 14th century but was comprehensively restored in 1870. The architect was James Fowler, who rebuilt the medieval structure in Early English style using limestone rubble for the walls and Collyweston slate for the roof.

Though most of the interior furnishings date from the Victorian restoration, several important historical features were retained. The most interesting is a pair of beautifully crafted memorial brasses to Thomas and Johanna Massingberd of Gunby Hall (c. 1405). The brasses show the couple standing beneath an ornate double canopy. 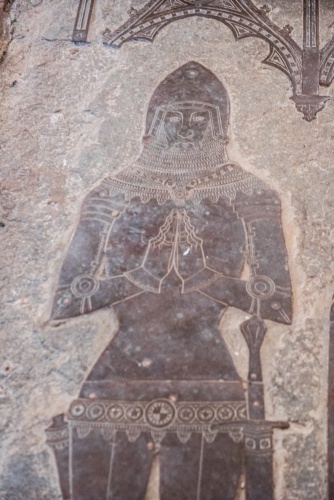 Another memorial brass commemorates Judge William Lodynton (d. 1420) and shows the deceased dressed in his legal robes under a cusped ogee canopy, with his feet resting on a small dog. Lodynton, or Lodington, was a judge of the Court of King's Bench under Henry V.

The tower arch dates to the 15th century, while the chancel arch was rebuilt as part of the Victorian restoration. Under the tower is a small brass plaque commemorating Thomas Massingberd, who died in 1552 at the age of 47. A pair of marble 19th-century wall plaques are also under the tower. 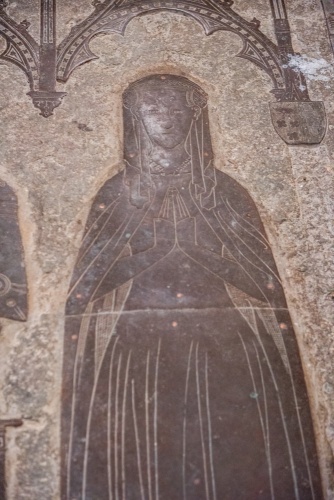 Near the south door is a plaque commemorating Algernon Massingberd who died in 1855. The inscription might be puzzling if you don't know the intriguing story behind it; it states:

'Sacred to the memory of Algernon Massingberd, who is supposed to have been shot at Fort Tabatinga on the Amazon River, July 1855 in the 27th year of his age. This tablet is placed to his memory by his mother, Caroline, wife of Algernon Langton Massingberd.'

It is an intriguing inscription; why say that Algernon was 'supposed to have been shot'? Did his mother have doubts over the reports of his death or of how he died?

Algernon was dubbed 'Naughty' Massingberd. He inherited the Gunby estates at the age of 16 and proceeded to gamble away his inheritance. He fell into heavy debt and fled overseas to escape his creditors. Massingberd disappeared on the Amazon and was presumed to have died, but because his body was never found he could not legally be declared dead until seven years had passed. When the seven years had elapsed the Gunby estate legally passed to his uncle Charles, who managed to restore the family fortunes.

On the wall above is a memorial to Algernon's father, Algernon Langton Massingberd, who died in 1844 at the age of just 40. 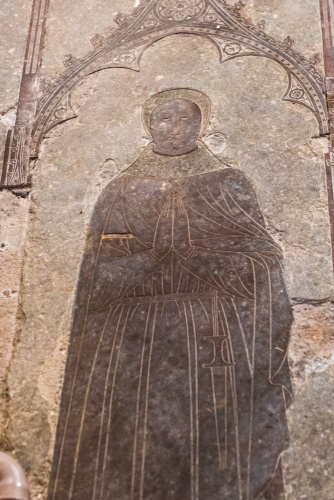 At the west end of the nave is a 19th-century font in 13th-century style.

The large east window holds excellent early 20th-century stained glass, installed as a memorial to Margaret Massingberd of Gunby Hall in 1906. In the central light is a panel depicting the deceased woman.

Under the window and beside the altar is a beautifully carved 16th-century chair. The church guide doesn't mention the chair nor does the official Historic England listing description, but it certainly appears to be Tudor.

On the nave wall is a peculiar WWI war memorial in the shape of a circular wooden plaque with a convex brass centrepiece. There are four names listed among the dead. One of the men has his own brass plaque on the wall; James Smalley died at Ypres on 11 November 1914. 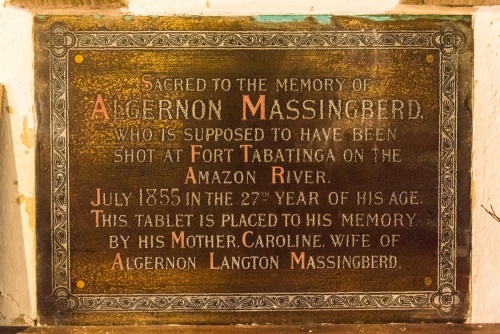 Nearby is a memorial to two men who died in WWII; Richard Langton and Donald Massingberd, the heirs of Gunby Hall, who were both killed in action over Germany and Italy respectively.

On the nave wall is a memorial tablet to Thomas Hollway, a captain in the 21st Royal North British Fusiliers who died at Portsmouth in 1864 aged just 27. The tablet was erected by his brother officers.

The church is extremely easy to reach on foot through the Gunby Hall gardens. It is open during Gunby Hall opening hours (see the National Trust website) and at other times you can get the keys from the Hall. 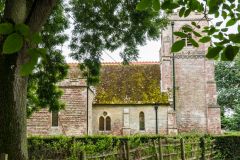 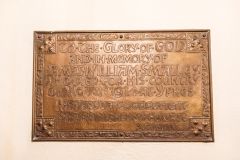 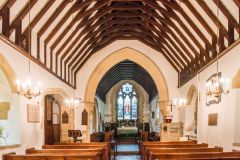 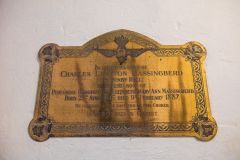