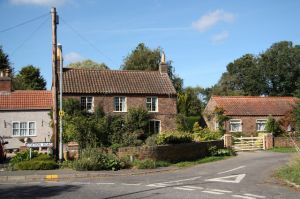 Willoughby is an attractive village near Alford, in the east of Lincolnshire, known for its connection to the early settlement at Jamestown, Virginia. One intriguing historical feature is found behind Tavern Way where you can see the remains of an earthwork of unknown origin.

The most famous name associated with Willoughby is Captain John Smith, one of the first settlers in America, whose story of rescue by the native princess Pocahontas has been told and retold (and garbled, it must be said) many times. Smith's parents rented a farm from Lord Willoughby and John was born here in 1580 and baptised in St Helena's church.

Covell's Farmhouse, where Smith was raised, still stands. To honour Smith's memory hundreds of Americans make a visit to Willoughby on the anniversary of the founding of Jamestown. The house does not immediately look to be the right period for Smith's birthplace, but that's because it was remodelled in the early 18th century with a facade of red brick.

Most will make their way to St Helena's church, built in the 14th century. The 15th century octagonal font where Smith was baptised still stands, as do more modern reminders in the form of stained glass windows dedicated to Smith and to the story of Jamestown.

The windows are largely 14th and 15th century, while the tower arch and nave arcades are 14th century. In the tower is a late medieval ladder giving access to the bell-ringing chamber. In the churchyard is an ornate Victorian memorial to the Hurdman family

The village pub is the Willoughby Arms on Church Lane.

On Bonthorpe Road is the Manor House, which, despite its name, is no more than a farmhouse, built in the late 18th century and altered in the Victorian period. On Mill Lane is Hogsbeck House, built in 1796 of red brick under a tile roof. 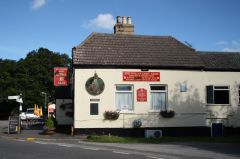 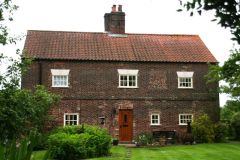 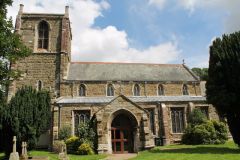 More self catering near Willoughby >>

More bed and breakfasts near Willoughby >>