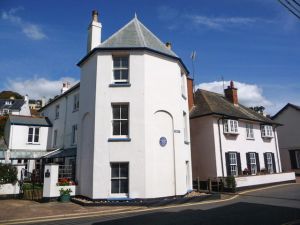 A seaside town in south Devon, Budleigh Salterton was once a fashionable resort, known as much for its lovely beaches as the striking red colour of the cliffs that rise above them. A few miles away are Bicton Park Gardens and the intriguing historic house at A la Ronde.

Sir Walter Raleigh was born nearby at East Budleigh, and his pew still stands in the church where his father was a warden. Also in East Budleigh is the Salem Chapel (1719), a Dissenters chapel built with a hidden chamber for smuggled goods.

There is another link to Raleigh in Budleigh Salterton; a striking octagonal dwelling called, not surprisingly, the Octagon. A blue plaque on the house exterior reminds us that it was the residence of painter Sir John Everett Millais. It was here that Millais painted one of his most famous works, The Boyhood of Raleigh, which was exhibited at the Royal Academy in 1871.

Just a few steps from the Octagon is Fairlynch, a beautiful thatched cottage and now home to a local museum and arts centre. The cottage was built in 1811 in a style known as 'marine cottage Orne', a picturesque and romantic interpretation of an idyllic vernacular cottage, with Gothic windows reminiscent of a chapel, under a hipped roof of thatch.

The museum is known for its historic costume collection, samples of local fossils, and exhibits covering the social history of the Budleigh area. One highlight is a piece of a 2nd-century Samian ware pottery bowl unearthed at a Roman villa just outside the town. Admission is free, though a donation is requested.

The parish church is St Peters, erected in 1893 to a design by George Fellowes Prynne. Until St Peters was built the residents of Budleigh Salterton were served by East Budleigh's church. St Peter's was heavily damaged by bombing in WWII but reopened in 1953. A church with older roots is Temple Methodist Church, built in 1904 as a replacement for a small chapel erected in 1812 by James Lackington, a close associate of John Wesley.

The South West Coast Path runs through the town, with the trail leading west to Exmouth and east along the cliffs to Sidmouth. The coastline forms part of the Jurassic Coast World Heritage Site, known for its rare geology and fossil deposits. 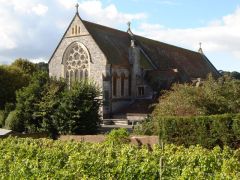 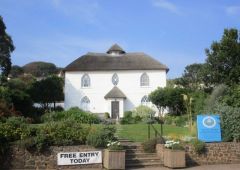 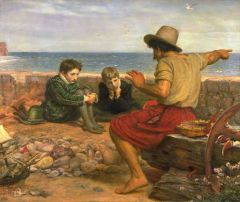 More self catering near Budleigh Salterton >>