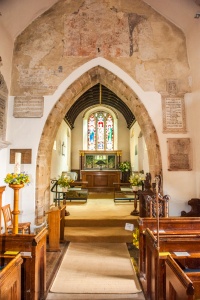 Looking towards the
chancel arch

In his 1954 book 'Devon', WG Hoskins called Salcombe Regis, 'a delightful little place ... in a warm and fertile combe'. That's a pretty apt description of this beautiful village, which lies about a mile inland from the sea. On a small lane near the village crossroads stands the picturesque 12th-century church of St Mary and St Peter.

Though the church we see today was begun in the Norman period, the history of the building goes back much further. In the mid 10th century King Athelstan gave Salcombe Regis to the Benedictine monks of Exeter, and it is possible ther was a Saxon timber church at that time. The monks were ousted by Bishop Leofric when he moved his see from Crediton to Exeter in 1056, and Salcombe Regis was seized by the bishop for his new cathedral.

Even though part of the village was described as 'Churchtown' in the Domesday Book of 1086 there is no certainty that there was actually a church standing at the time. There was certainly a stone church by 1149, when a canon of Exeter Cathedral was installed at Thor farmhouse, which still stands, uphill of the church. One of the canon's duties was to make sure the parson did a good job with the church services. 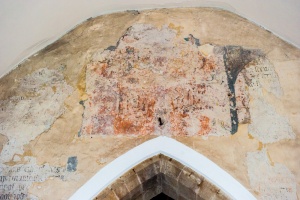 The church was probably built between 1120-1130 by masons quarrying local stone for Exeter Cathedral. The best surviving features of the 12th-century church are a pair of Norman pillars in the north arcade. External 12th-century features include a gargoyle on the north chancel wall and a consecration cross over the east window.

The rest of the nave arcade dates to the 13th century, as does a piscina under a pointed arch. The church changed little in the 14th century, but the village certainly did; the Black Death of 1349 decimated the population, and over the course of one year there were 3 vicars. The parishioners took exception to the resident canon in 1354 and the Cathedral was forced to withdraw him and install a different man in his place.

In the 15th century the aisles were added and the roof raised. The north aisle boasts its original 15th-century wagon roof. Around 1445 the west tower was built, with an external stair turret rising in three stages to an embattled top. The 15th century west door is a peculiar combination of Scots Pine panels on one side and elm on the other. 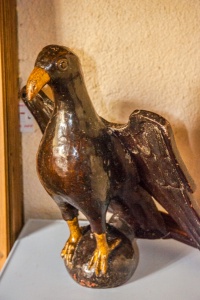 Interior highlights include a worn wall painting over the chancel arch. The painting may be medieval, overpainted in the Tudor period with a royal coat of arms.

The church was badly damaged during WWII, when guns when German bombs blew out all the windows. As a result, there is no old glass, but the sanctuary windows hold glass by the famous Victorian firm of Clayton and Bell, with panels depicting scenes from John Bunyan's 'Pilgrim's Progress'.

One of the most interesting features is also one of the most recent. Behind the altar is a stunning glass triptych, created by the famous glass engraver Sir Lawrence Whistler and completed by his son Simon. The centre panel depicts the Crucifixion and is flanked by symbols of local life, including fishing boats and flowers from the surrounding countryside. Behind the triptych is a reredos brought from All Hallows in Exeter when that church was torn down in 1950.

The simple stone font is 12th century, with an octagonal cover carved in 1640. The inner font bowl is probably of 15th century date. The pulpit is a very finely carved Jacobean work, reworked in the early 20th century but still retaining many of its original panels.

One feature that I loved was the lectern, probably also 15th century, and unusually carved in the likeness of a chough (another theory suggests that it is a featherless eagle). The lectern was removed for safekeeping during the religious turmoil of the Commonwealth years. It was hidden in a barn loft, and only rediscovered in 1850.

St Mary and St Peter's is a lovely church, full of historic interest, set in a beautiful Devon village. Do take a few minutes to walk from the church up to the crossroads, where you will find the current iteration of the Salcombe Thorn.

A thorn tree has stood on this spot since the Saxon period to mark the parish boundary, and the thorn gives its name to Thorn farmhouse, where the canon representing Exeter Cathedral resided from the 11th century. 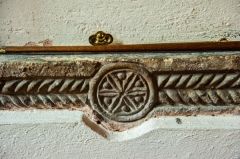 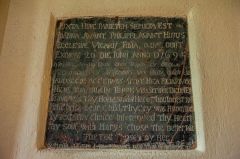 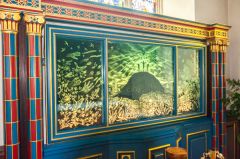 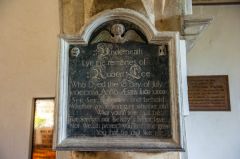