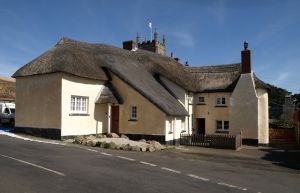 Drewsteignton is a large village in the Teign Valley in the northeast corner of Dartmoor National Park, known for its picturesque village centre, which has been named as a Conservation Area to preserve its timeless appeal.

We know that the area around Drewsteignton was settled as early as the Neolithic period when a chambered tomb was erected at nearby Spinsters Rock. The prominent hill of Prestonbury was later surmounted with an Iron age hillfort. The village was mentioned in the Domesday Book of 1086 as Taintone, meaning a settlement beside the Teign.

The name evolved and by the 13th century it was called Teyngton Drue, after a local landowner named Drogo, or Drewe. A highly romanticised version of the village's origins equated 'Drew' with druids, but this has more to do with fantasy than history.

The village economy during the medieval period grew due to local tin mining, a limestone quarry, and most important of all, wool production. The village's growth was aided by its location on the main route between Okehampton and Exeter.

Holy Trinity dates to the 15th century but stands on the site of a much earlier building. The west tower may completely envelop the tower of the earlier church. Inside is a royal coat of arms from the reign of Elizabeth I and a peculiar font. The font pedestal is Norman but the bowl dates from the 18th century when the roof fell in and broke the original beyond repair.

here are a number of 17th-18th century grave slabs set into the floor. Look for the board displaying rules for bell-ringers in rhyming verse. One verse sets out a fine for wearing a hat while ringing the bells as 'He that rings here in his hat, Threepence shall pay for that'.

In the churchyard is a memorial to Julius Drewe of Castle Drogo. The memorial was designed by Sir Edwin Lutyens, who also created the castle for the Drewe family.

In the village square is a popular pub known as the Drewe Arms, originally called The Druids' Arms. Immediately beside the churchyard is Church Cottage, which may have begun as an almshouse. Another historic building is Church House, which began as a 16th-century brewery for the church, then was converted into a school, and now serves as the village hall.

Lady House is even older, dating to at least 1542. One mile away is the Victorian Gothic stately home of Castle Drogo. 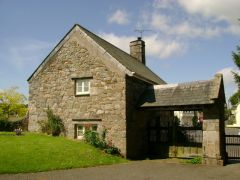 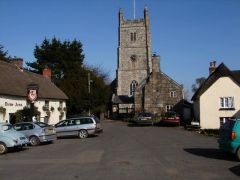 More self catering near Drewsteignton >>

More bed and breakfasts near Drewsteignton >> 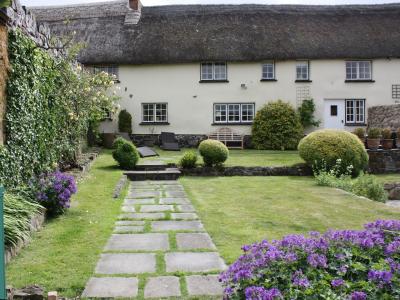 This thatched cottage is situated in the Devon village of Drewsteignton and can sleep six people in four bedrooms.
Sleeps 6