HERITAGE HIGHLIGHTS:   One of 3 hillforts along the River Teign 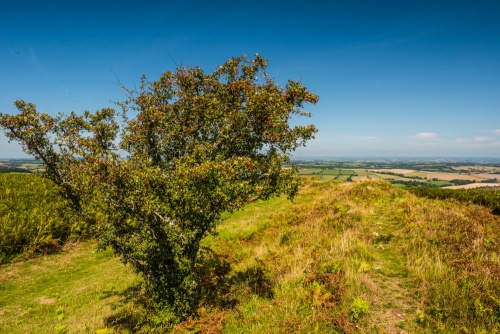 Cranbrook Castle is an Iron Age hillfort overlooking the River Teign in the north-eastern corner of Dartmoor near the village of Drewsteignton. The hillfort is a univallate design (defined by a single bank and ditch) crowning the top of Cranbrook Down. It was built sometime between 500 BC and 0 AD

The hillfort is roughly square and measures 160m across internally, enclosing an area of 5.3 hectares (13 acres). To the north is a single rampart while to the east, south and west is a bank with a stone core and an outer ditch. You can see evidence of a stone revetment in places. To the south is a short section of a ditch and bank.

There is a simple causewayed entrance on the eastern side and a more elaborate entrance in the south-east where a causeway is protected by the outer bank. 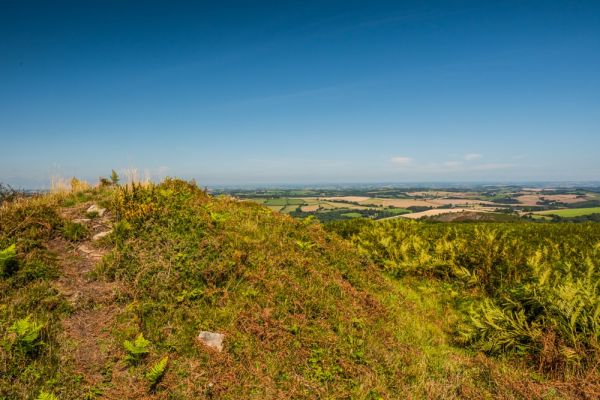 In several places you can see exposed areas of stone used to reinforce the bank. You can walk along the top of the bank for most of the fort's perimeter, and a cleared section at the inner base of the fort makes it easy to walk inside the rampart. The outer rampart is thought to be built over an earlier field system.

There are fabulous views over the Teign Gorge to the north and west, and over Dartmoor to the south and west.

The site was excavated in 1901 when two hut circles were found along with pottery fragments and part of a quern. Inside the hillfort - covered in bracken when we visited in late August - are the remains of 30 clearance cairns formed by clearing the hillfort for farming.

One interesting feature that is hard to see with bracken obscuring the hillfort enclosure is that the inner rampart on the south side is very irregular in height. This is thought to be the result of the rampart being built by two different work crews, each responsible for a different section of the fort. 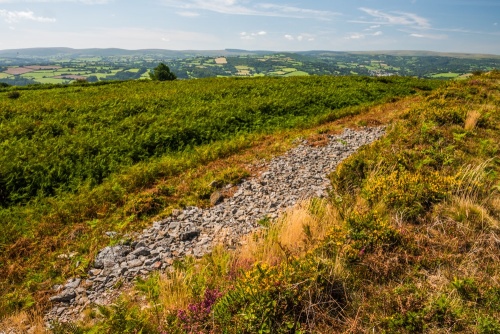 Cranbrook Castle is one of 3 hillforts along the River Teign. Visible across the river is Prestonbury Castle, while 3km (1.8 miles) to the east is Wooston Castle.

Reaching Cranbrook Castle is straightforward, though the most popular route will take some effort! A wide forestry road zig-zags up the steep hill from Fingle Bridge, where you will find a popular country inn. From the Bridge simply cross to the south bank of the River Teign and follow the obvious rough road up the hill. There is an informational sign and map by the river, but no other signs.

The track climbs steadily, and the going is steep. There is a wonderful viewpoint halfway up the hill with a bench to sit and enjoy the scenery - and get your breath back. Eventually the woodland peters out and you catch glimpses of a farm field to your right. 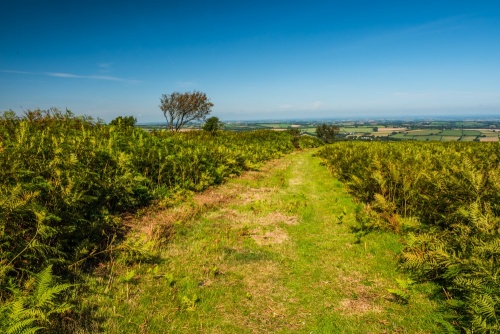 Inside the hillfort ramparts

Pay close attention when you reach this point, as it is very easy to miss the turning to Cranbrook Castle. We walked right past it, and only realised our error when we reached a paved road on the top of the hill. I highly recommend bringing along an OS map (OL28 'Dartmoor' covers the area).

In theory, there is a waymarker on the forestry road labelled CRANBROOK CASTLE (IRON AGE RAMPART), but we didn't find it and had to rely on our wits and repeated discussion over the OS map to discover the correct path to the hillfort.

There is no signpost, but if you pay attention you will see a path leading off to the right to a farm gate. Go through the gate and follow the very obvious path through a small field. The path emerges at the base of the hillfort's earthwork bank.

From Fingle Bridge it is roughly one mile uphill to Cranbrook Castle. Count on 30 minutes climb due to the steep nature of the track. Coming down, of course, you can cut that time considerably!

If you'd rather avoid exertion entirely you can take the narrow country lane from Easton on the A382 in the direction of Cranbrook. Just before you reach the hamlet you will see the forestry road emerging on your left. There is room for one or two cars to park carefully around a small triangular junction. From there just walk along the forestry track until you see the trail to the fort heading off to your left. 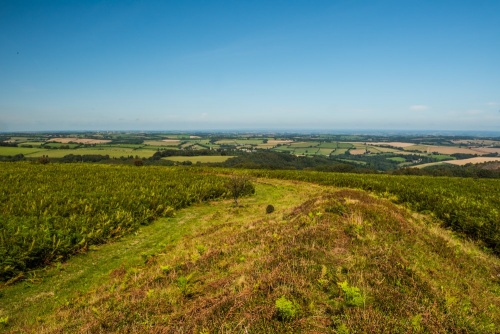 Looking north along the ramparts

Fingle Bridge is part of a very popular circular walk from the National Trust's Castle Drogo. We visited the Castle and took the signposted trail to the Bridge, then detoured up the hill to see Cranbrook Castle before returning to the bridge and making our way back to Castle Drogo by the riverside trail.

The entire walk took three hours, and we were huffing and puffing by the end of it, but the route is lovely and the scenery is breathtaking. 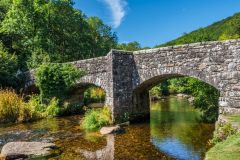 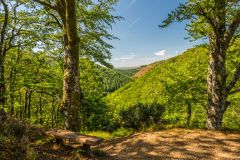 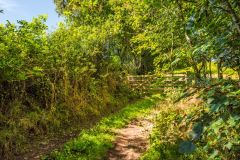 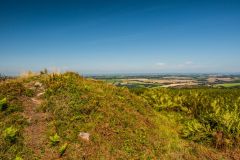 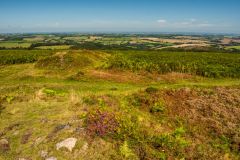