HERITAGE HIGHLIGHTS:   An excellent example of a post-medieval bridge 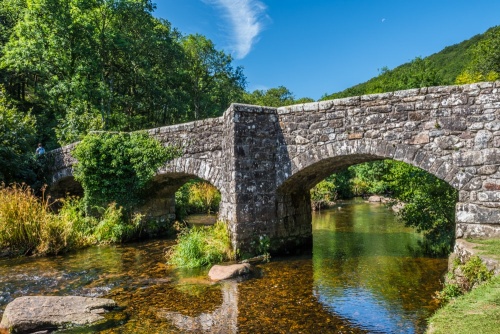 Fingle Bridge is a Grade II * listed early 17th-century bridge across the River Teign near the village of Drewsteignton, in the north-east corner of Dartmoor National Park.

The bridge's name derives from the Fingle Brook, a tributary of the River Teign. The origin of the name 'Fingle' is a matter of historical debate. It may derive from the Old English 'fang', meaning hold, or catch, perhaps a reference to the bountiful fish in the River Teign. Or it could derive from Fengelad, meaning a fen or a marsh, or Fengel, meaning a king or prince. The earliest record of the name comes from 1317.

We do not know exactly when the bridge was built but it was recorded as being in a state of decay by 1665, so we can assume that was built considerably earlier than that. It is shown on a map made by Benjamin Donn in 1765. 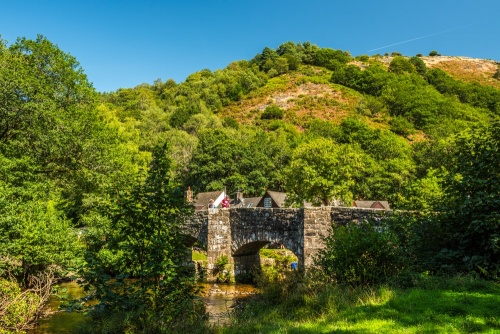 Fingle Bridge from the west

The main route from Drewsteignton to the market town of Moretonhampstead passed over the bridge until Dogmarsh Bridge was built further west around 1840 (on the A382 south of Sandy Park). Fingle Bridge still carries traffic, but the road now ends at a car park on the south bank of the river.

The bridge has three segmental arches and is built of granite blocks dressed with ashlar for the voussoirs and coping. The two piers each have a cutwater that rises to parapet level and helps form a refuge (a triangular area where pedestrians can shelter from traffic).

The parapet is made of stone rubble dressed with ashlar. The parapet rises to 0.8m (about 2'7"). The carriageway is 2m (6'6") wide and forms a slight hump in the middle. The bridge is one of the narrowest on Dartmoor. It was made to carry packhorse traffic from the corn milling, charcoal burning, and forestry activity that took place along the Teign Gorge. 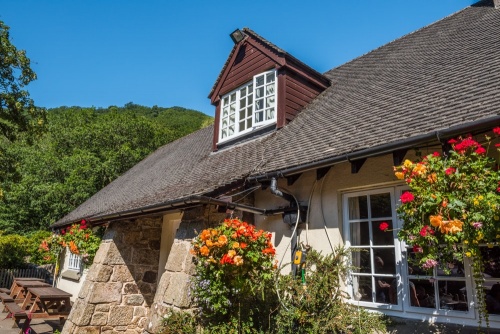 The northern arch was damaged in 1809 and repaired. The southern arch spans a 500m long leat that fed Fingle Mill, no longer in existence. By the northern end of the bridge stands the Fingle Bridge Inn, a riverside pub very popular with walkers. The inn began in 1897 as a tea shop serving fishermen and workmen carrying grain. It also served the tourists that began to flock to the Bridge, drawn by its reputation as a picturesque destination.

One of Dartmoor's most popular walks is a circular route linking Fingle Bridge to the National Trust's Castle Drogo, an early 20th-century country house located at the western end of the Teign Gorge, about two miles away. A trail leads along the top of the Gorge, with a viewpoint at Sharp Tor giving fabulous views over the heavily wooded river valley and a glimpse of the Castle, perched on a rocky outcrop.

From Fingle Bridge a forestry road follows the route of the old road to Moretonhampstead as it zig-zags up the hill through beautiful woodland. At the top of the hill, a trail leads west to Cranbrook Castle, an Iron Age hillfort offering spectacular views over the surrounding countryside.

Prestonbury Castle, another hillfort, occupies the hilltop immediately east of Fingle Bridge but in this case, there are no footpaths to the summit. If you follow the footpath east from the bridge you will come to a third Iron Age hillfort, Wooston Castle. 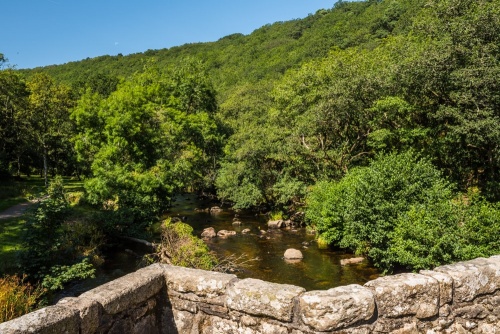 The view from the bridge parapet

The castle lies at the eastern end of Fingle Woods, 825 acres of ancient woodland preserved by the Woodland Trust and the National Trust.

Fingle Bridge is an extremely popular focal point for countryside walks and one of the most picturesque locations on Dartmoor. There are parking areas on both sides of the river and trails following both the north and south banks.

There are two ways to reach Fingle Bridge - by car or on foot. By car, simply follow the signposted minor road from Derwesteignton village. Just before you reach the bridge there is a parking area on the lefthand side of the road. You can continue over the bridge to a second car park on the far bank (though I'd only advise that if your vehicle isn't too wide). 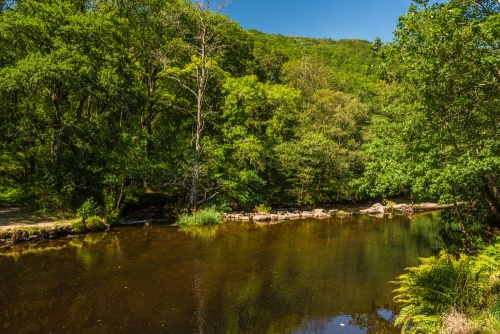 The River Teign at Fingle Bridge

Alternatively, park at Castle Drogo (charges apply if you aren't a National Trust member). You can pick up a walk leaflet from the Castle Drogo visitor centre outlining the very popular circular route to Fingle Bridge and back. The leaflet isn't necessary, as the route is very well signposted. Simply follow the signs for Hunter's Path and Fingle Bridge.

The route takes in Sharp Tor, a viewpoint offering wonderful panoramic vistas over the Teign Gorge, before dropping down to the bridge. To return you can retrace your steps or, even better take one of the paths that follow both banks of the river. You will pass the weir and water turbine built to generate power for Castle Drogo before climbing up the hill to the car park once more.

This classic circular route takes roughly 2.5 hours and can be extended to take in Cranbrook Castle hillfort on the south bank of the Teign.

More self catering near Fingle Bridge