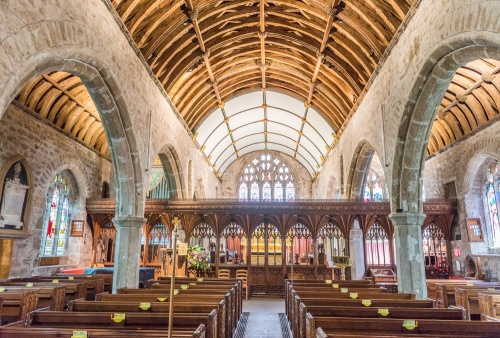 Just off the market square in Chagford stands the 13th-century parish church of St Michael the Archangel. Unusually for a medieval church, we know exactly when St Michael's was opened, as records show that the church was dedicated by Bishop Branscombe of Exeter in 1261.

The church consists of a nave with three aisles and a crossing. The tower is 15th century but the west window was retained from the 13th-century church. Above the south door is a painted royal coat of arms to George IV (1820-30). Opposite is a benefaction board with details of the annual donation of bread to the poor. It makes for fascinating reading:

'... there is by Custom one Pound seven Shillings worth of Bread, called Bonamus Bread Distributed to the Poor of this Parish by the Churchwardens on every Good-friday, to be Continued for ever.' 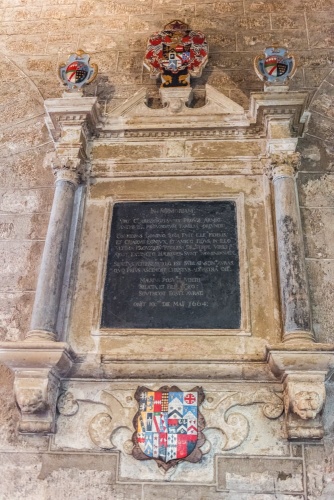 The Tragedy of Mary Whiddon

The Whiddon family were local squires for generations, and many of them are buried in the church. Their family home was the 13th-century building now serving as the Three Crowns Hotel. The most famous member of the family was Mary Whiddon, who, legend tells us, was shot dead while leaving the church on her wedding day (11th October 1641) by a jealous suitor. She was laid to rest, still clad in her wedding dress, and buried in the church.

Modern brides still lay a flower on her tomb after signing the church register and it is said that any bride marrying from the Three Crowns Hotel (formerly Whiddon House) will meet Mary Whiddon's ghost. Mary Whiddon's tragic death is said to have inspired RD Blackmore's fictional account of Lorna Doone, shot - but not killed - by Carver Doone through the church window in Oare. 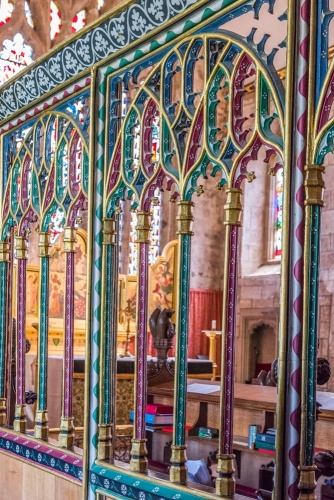 The beautifully carved and painted screen

Mary Whiddon, daughter of Oliver Whiddon, who died in 1641
Reader, would’st though know who here
is laid,
Behold a matron, yet a maid
A modest look, a pious heart
A Mary for the better part
But dry thine eyes, why wilt thou
weep
Such damselles doe not die, but
sleep

On the north wall of the sanctuary is a tomb to one of Mary Whiddon's ancestors, Sir John Whiddon (d 1575). Sir John was a judge of the King's Bench and was the first judge to ride to Westminster Hall on a horse rather than the traditional donkey. 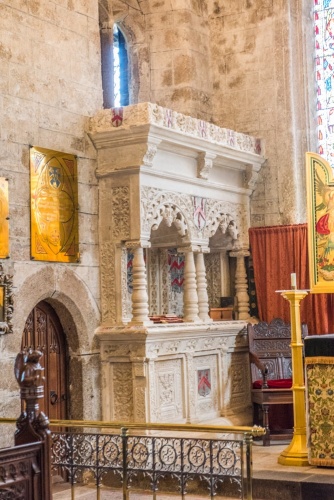 Also on the north wall is a memorial to Thomas Hayter, the son of a Chagford rector who rose to become the Bishop of Norwich in 1749 and the Bishop of London in 1761. Grave slabs to generations of Hayters - many of them rectors of Chagford - are set into the sanctuary floor.

The church roof has finely carved wooden bosses, including one depicting the Tinners' Rabbits; three rabbits with two ears each yet only three ears between them all. The rabbits became the symbol of tin miners and act as a reminder that Chagford was one of four Stannary Towns in Devon, administering the tin trade for centuries.

In the Lady Chapel is a wooden model of an Esquire's helmet, used in funeral processions by members of the Prouz family of Waye Barton. The Prouz family monument stands in the south aisle. It is decorated with the coats of arms to which the family claimed an affiliation. 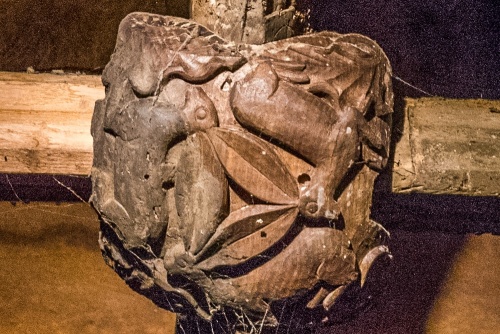 Chagford Through the Ages

One of the most modern highlights of St Michael's Church is an outstanding patchwork applique entitled Chagford through the Ages, depicting life in Chagford from Prehistoric times to the present day.

The result is exceptional, and it is great fun to pick out individual historical people, places and events in the myriad of scenes depicted by local needleworkers from the Chagford Women's Institute. You can spot Dartmoor ponies wandering the moors, tin miners working their mines, and Mary Whiddon lying in her coffin, still clad in her wedding dress.

In the churchyard is the grave of James Perrott, a 19th-century Dartmoor guide who began the pastime of 'letterboxing'. Perrott left a glass bottle at Cranmere Pool, where those who followed him left their calling cards. The custom caught on, and the pastime of letterboxing began. Perrott's original letterbox location is now marked on Ordnance Survey maps of the area (OL28 Explorer). 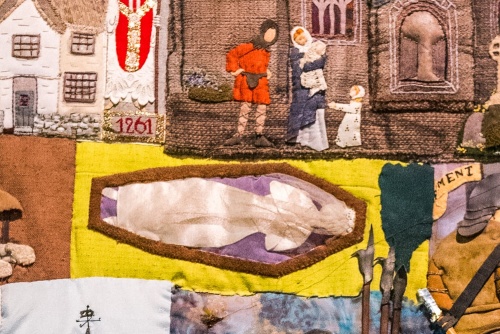 Marry Whiddon in her coffin, from the
Chagford through the Ages patchwork

St Michael's is very easy to find. It stands on High Street immediately south-east of the town square. There is a large town parking area about 2 minutes stroll away - just follow the obvious signs. The church is usually open daylight hours and was open when we visited. 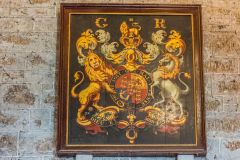 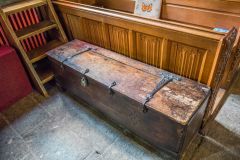 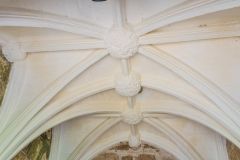