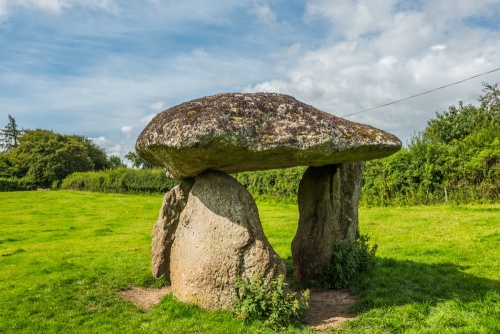 The burial chamber would have originally been covered with earth but over time the earth has eroded, leaving only the stones behind. The capstone is estimated to weigh 16 tons and is 2.7m (9 feet) off the ground. 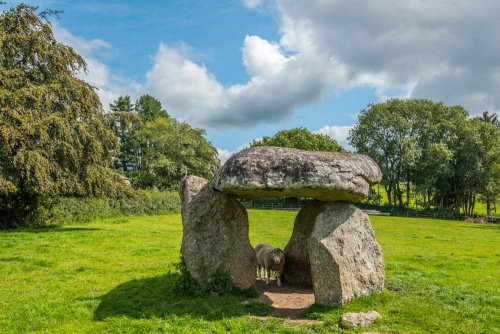 Spinsters' Rock from the west (note the sheep under the dolmen)

When archaeologists first investigated the site they found a number of stone circles and rows near the dolmen (across the road on Shilstone Common). That would suggest that Spinsters' Rock was part of a large ceremonial complex, of which it is the only remaining feature.

It seems very likely that these additional stones were added in the Bronze Age, after the burial chamber was built. They were removed by the tenant of Shilstone Farm, presumably because they got in the way of cultivating the land. 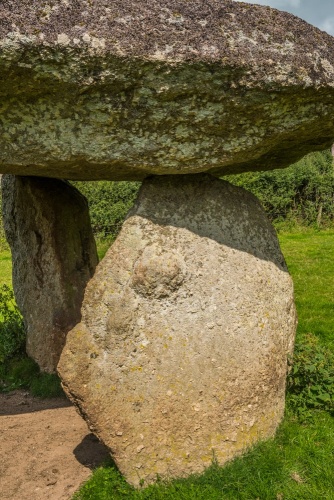 Why is the burial chamber called 'Spinsters' Rock?

The peculiar name comes from a local legend that the dolmen was erected by three spinsters one morning before breakfast. In this context, the word 'spinster' does not refer to an unmarried woman but to someone involved in spinning wool. The three spinsters had some time to kill one morning while waiting for their wool to be collected by the jobber (local wool trader) so they decided to balance several large stones.

A variation on the story says that the dolmen had collapsed and the local men couldn't be bothered to re-erect it, so the spinsters did it themselves as a way of making a point to the men. Yet another version says that an elderly man and his three sons erected the monument one morning and were turned to stone. The old man was said to be Noah (of Old Testament fame), and he is the capstone, while his three sons are the upright supports. 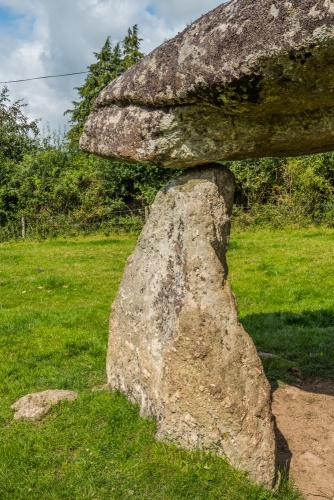 The first written record of Spinsters' Rock comes in 1778 when William Chapple declared it to be a Druidical monument adapted for their own purposes by Romanised Britons. Later writers embellished the dolmen's origins with stories that the three spinsters relate to the Fatal Sisters of Norse myth (the Norse equivalent of the Fates of Greek mythology).

The dolmen collapsed in 1862, probably because the soil had been weakened by ploughing during an exceptionally wet spring. The dolmen was re-erected by locals, using sketches of the site made 4 years earlier. The supporting upright stones were not replaced in their original positions and were reinforced with iron bars below ground level. 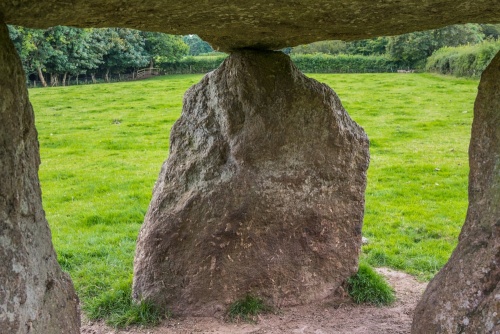 Spinsters' Rock stands in a field just south of the lane leading to Shilstone Farm, 3.5km from Drewsteignton village. Take the minor road heading east off the A382 between Sandy Park and Venton, signposted Drewsteignton. This is the second road off the A382 after the turnoff to Castle Drogo, heading north.

You reach Shilstone after about 600m. You will see several farm buildings on the left, and almost opposite is a small layby on the south (right) side of the road with room for several cars. The view south is screened by a dense hedge, but the burial chamber is in the farm field just behind the hedge. You will see a gate at the east end of the field, just past the layby, with a small sign reading,

'A Neolithic burial chamber erected around 3500-2500 BC. This chamber probably contained many burials and would originally have been covered by a long earthen mound. The stones fell down in 1862 and were re-erected in the same year. Traditionally the monument was erected by three spinsters one morning before breakfast.'

Please note that Spinsters' Rock is a public access site, but it is located on private property, so please be respectful. Don't block farm vehicle access and treat the site with respect.

Spinsters' Rock is just a few miles from the National Trust's Castle Drogo.

About Spinsters' Rock
Address: Shilstone, Drewsteignton, Dartmoor, Devon, England, TQ13 8JX
Attraction Type: Prehistoric Site
Location: At Shilstone Farm, on the minor road leading east off the A382 between Sandy Park and Venton. There is a layby on the south side of the road.
Location map
OS: SX700907
Photo Credit: David Ross and Britain Express

More self catering near Spinsters' Rock