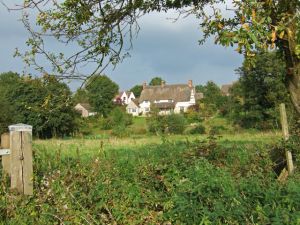 A thatched cottage at Batcombe
Batcombe is a small village on the slopes of the Dorset Downs. Above the village rises Batcombe Down, at the top of which is a stone pillar known as The Cross-in-Hand. The pillar was used to dramatic effect in Thomas Hardy's novel, 'Tess of the D'Urbervilles'. It is said that some who see the Cross can view a ghostly hand grasping the bowl at the top of the pillar.

The parish church of St Mary is worth noting; it is mainly 15th century with later Victorian rebuilding, and it features a carved 12th-century font. One of the four pinnacles atop the tower is crooked.

That in itself is not noteworthy, but the tale how the pinnace came to be crooked is worth telling!

It seems that the Batcombe squire, known locally as 'Conjuring Minterne', was suspected by villagers of being a magician. One day the squire attempted to leap over the tower on his horse. He made it, but knocked the pinnacle askew in the attempt.

The fearful villagers were afraid that they might offend the devil by repairing the damage, so for a hundred years they left it alone. When it was repaired, they repaired it at a crooked angle. Take the tale as you will, but it does add interest to an otherwise ordinary architectural feature!

More self catering near Batcombe >>

More bed and breakfasts near Batcombe >>