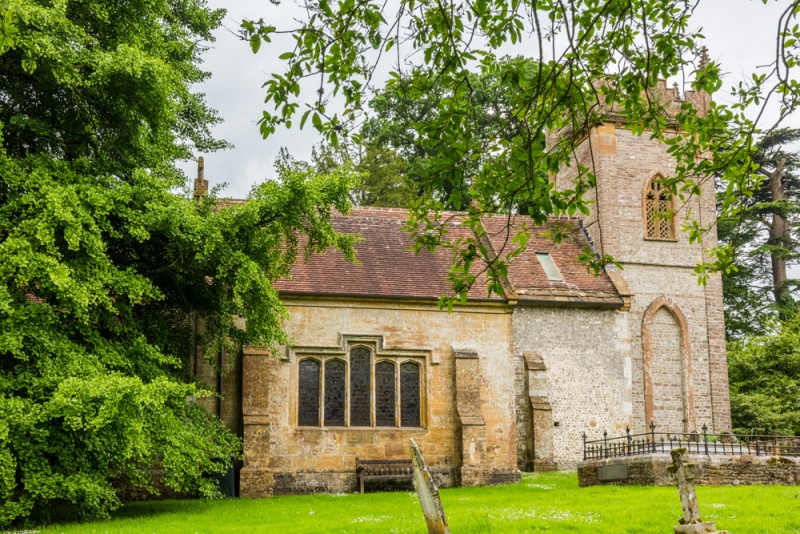 Minterne Magna is located midway between Sherborne and Dorchester and sits astride the A352. Most people come to the village to visit the exotic gardens surrounding Minterne House. Standing beside the drive to the mansion is the pretty country church of St Andrew.

There was a Saxon church on this site, and parts of that early building have been incorporated into the present chancel. The nave and chancel were rebuilt in the 15th century in a mix of rubble and flint dressed with Ham Hill stone. Around 1610 the north chapel was added, replacing an earlier medieval chapel. Unusually, the main doorway is in the west face of the tower and opens directly onto the road.

There are two bells, both cast in the 15th century. Also 15th century is the Perpendicular font at the west end of the nave. The tower was built around 1800 and heightened during a late Victorian restoration.

In the chapel are memorials to the local Napier family. The most impressive is an exceptional monument to Sir Nathaniel Napier, which takes up the entire east wall of the chapel. Sir Nathaniel was responsible for the almshouses in Dorchester.

The stained glass windows are Victorian, with the exception of several 15th-century fragments in the nave. The windows record the history of the Digby family. Look for the window commemorating the 10th Baron Digby. Beside it is a window dedicated to Almarus Digby, who died in 1886. Behind the altar is a window given by the 9th Baron Digby in honour of his wife Lady Theresa Fox-Strangways. Look for the memorial to Admiral Sir Henry Digby, who fought at the Battle of Trafalgar in 1805.

The real treasures of St Andrews are the memorials to the Churchill family. On the north nave wall is a marvellous 18th-century monument to General Sir Charles Churchill (d. 1714), the son of a knight named Sir Winston Churchill (not the 20th century Prime Minister!). 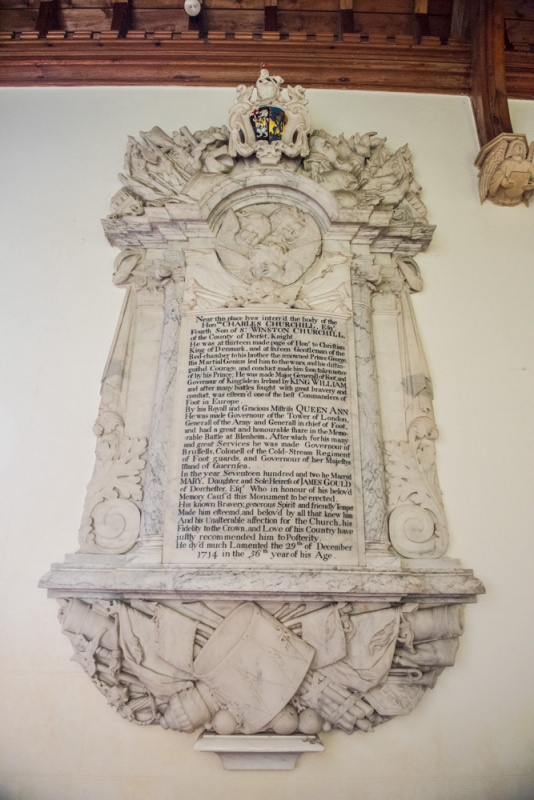 Memorial to General Charles Churchill (d. 1714)
brother of the Duke of Marlborough

At the age of just 13 Charles Churchill was made a page to the King of Denmark, and at 15 became Groom of the Bedchamber to the King's brother, Prince George. He entered military service and fought with such distinction that he was made Governor of Kinsale in Ireland.

He served as a Major General under William III and as Governor of the Tower of London under Queen Anne. General Churchill was the brother of John Churchill, the Duke of Marlborough, who was awarded Blenheim Palace for his military success at the Battle of Blenheim. General Churchill also fought at Blenheim, though unlike his brother he was not awarded a palace as reward. He later served as Governor of Brussels and of Guernsey.

In the floor by the pulpit is a grave slab to John Churchill (d. 1659), the father of the first Winston Churchill. Nearby is another slab commemorating Ellen Churchill (d. 1673). Ellen was the sister of General Charles Churchill and the Duke of Marlborough.

Outside the church look for consecration crosses carved into the stonework. One on the south nave wall is thought to be 15th century. There is another on the north nave wall and two on the east wall. On the south tower wall is a scratch dial, used for telling what time mass should be held in the days before clocks.

Though small, St Andrew's is full of historic interest, and the monuments to the Churchill, Napier, and Digby families make this a wonderful church to explore. 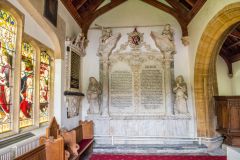 More self catering near Minterne Magna