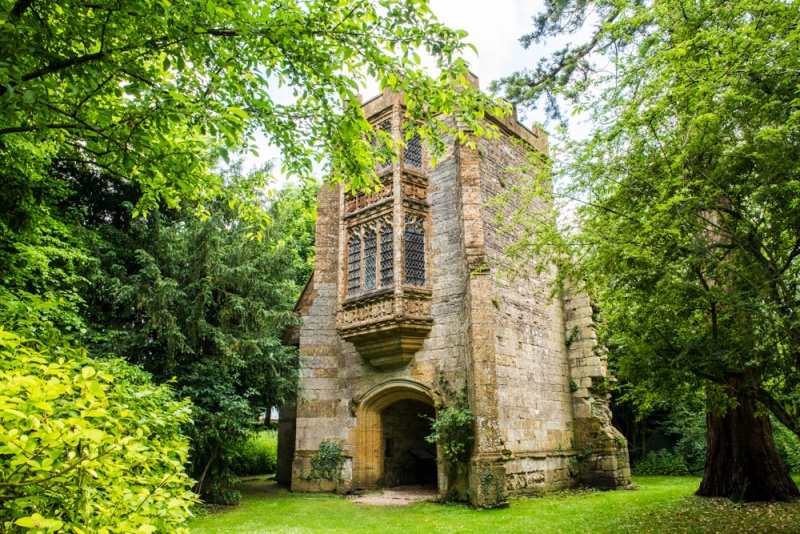 The history of Cerne Abbey is full of contradictory tales. One version suggests that it dates to the arrival of St Augustine around the year AD 600. Augustine converted King Ethelbert of Kent to Christianity, then led a band of missionaries further west into Ethelbert's outlying territory.

The inhabitants drove Augustine and his companions away, but were soon overcome by the saint's holiness and repented. Augustine attributed their change of heart to Divine intervention, and named the place Cernel, from a combination of Hebrew and Latin words loosely translating as 'God's decision'. At Augustine's command, a spring gushed forth from the ground, and he used the water to baptise his new converts. The spring became known as St Augustine's Well, and can still be visited a short distance from the abbey remains.

In AD 870 King Edmund of the East Angles was murdered by the Danes, and the crown was offered to his brother Edwold. He refused, and came to live as a hermit near Cerne, setting up his cell at St Augustine's Well. He died at Cerne, and his relics were transferred to the old church that stood where the present medieval church of St Mary now stands.

In AD 987 King Edgar founded an abbey near the site of Edwold's hermitage, under the direction of Aethelmaer, Duke of Cornwall. Another version of the story says that Aethelmaer was given the abbey by a relative.

Yet another version says that the abbey was established by Aethelmaer himself, in honour of King Ethelred, who succeeded to the throne after the death of Edgar and his heir Edward. The first abbot was Aelfric, a learned man who wrote a large number of sermons, lives of the saints, and Biblical translations which were used by clergy around Britain until well into the medieval period. 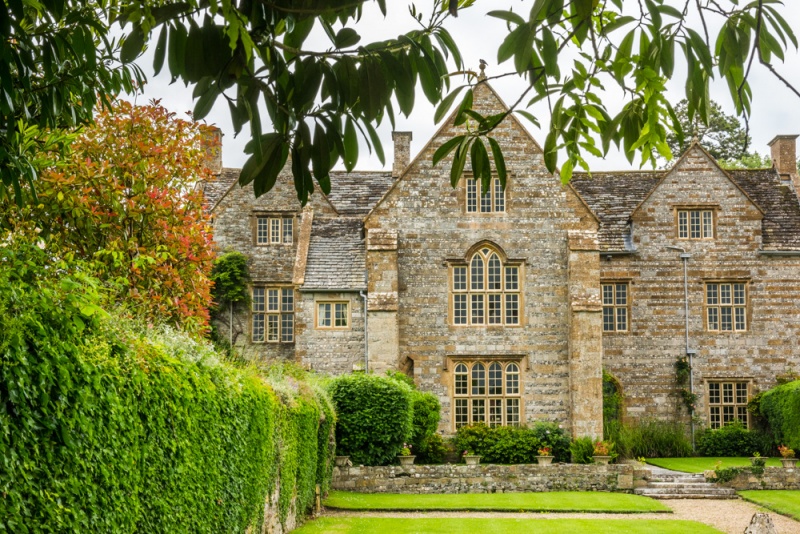 Several of his writings have survived, including a Colloquy intended to help local boys attending the monastery school to speak Latin. In it, he introduces characters from daily life, including a hunter, a farmer, and a monk. Each of the characters tells the others about his life and attitudes. The colloquy provides a wonderful insight into Saxon life.

In the early 11th century King Cnut sacked Cerne Abbey and burned the town, but after he gained the crown of England he actually became a major benefactor of the abbey. The Abbot of Cerne became a knight of the shire, and was summoned to Parliament in 1315 and to the Great Council at Westminster in 1324.

The abbey was also granted the rights to any shipwrecks on the coast bordering their estates, and there is an account from 1275 of an investigation of the abbot's complaint that the constable of Corfe Castle illegally seized two tuns of wine that had washed up on the shore.

Several monarchs have visited Cerne Abbey, including King John and Henry III, in addition to famous figures like Sir Winston Churchill and the Prince of Wales.

The abbey was dissolved by Henry VIII in 1539, despite the abbot trying to buy off the King's Commissioners and Thomas Cromwell, the king's chief minister. The King's Commissioners did not have a hard time finding evidence of monastic abuse, for they had on record a long list of complaints drawn up by one of the monks, William Christchurch.

Brother William obviously had a grudge against Abbot Thomas Corton and several senior monks. He accused the abbot of keeping concubines in the abbey cellars, and of giving gifts of the abbey's money to his concubines and their children.

According to the complaints, some of the monks played cards all night, and the abbot abolished some masses and did not give doles to the poor. The King's Commissioners were able to use this 'evidence' to force the closure of the abbey. Curiously, the abbot and monks all received pensions, but the name of William Christchurch does not appear amongst them.

Most of the abbey buildings were destroyed, but there are several fascinating remains to show how impressive it must once have been.

The most impressive surviving building is the abbey guesthouse, built by Abbot Vanne (1458-1471). Providing hospitality to travellers was a major element of the abbey's function, and the guesthouse reflects this.

The most famous visitors is said to have been Queen Margaret of Anjou, wife of Henry VI, who came here at the climax of the Wars of the Roses. The queen and her young son arrived in Weymouth from France, only to hear the news of her army's defeat at the Battle of Barnet. The royals sought shelter at Cerne Abbey to draw up new plans. Their schemes ended with the Lancastrian defeat at the Battle of Tewkesbury later that year. 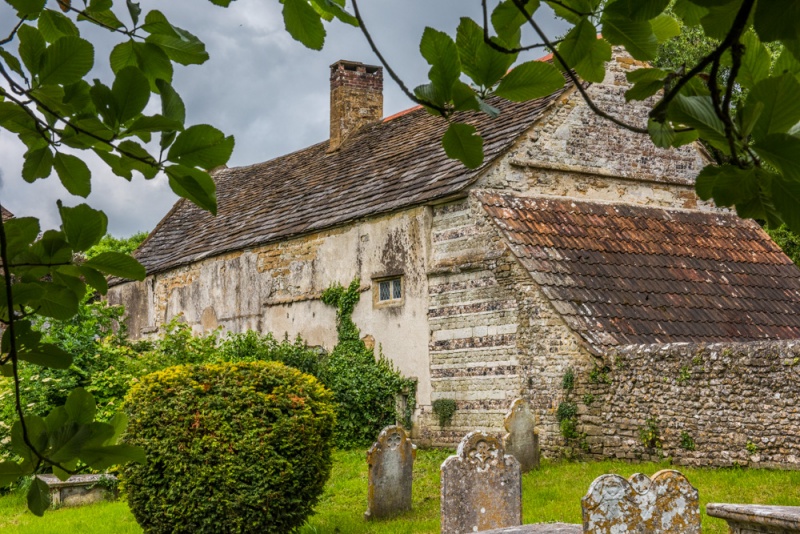 The most impressive feature of the guesthouse is a finely carved oriel window. In Abbey House (also known as South Gate House) is a fireplace from the guesthouse, carved with Abbot Vanne's personal crest.

As its name suggests, South Gate House evolved from the original abbey gateway, and is built with stones and roof lead from the monastic buildings. The house was rebuilt in the mid-18th century and restored in the 1950s. It is a beautiful Tudor mansion, but very much a private home and not open to visitors.

Beyond the abbey guesthouse, sheltered by a grove of tall trees, is the Abbot's Porch, a picturesque three-storey structure that acted as the main entrance to the medieval Abbot's Hall. The Hall was built in 1497 by Abbot Thomas Sam.

It boasts a pair of stunningly beautiful oriel windows. Around the windows are coats of arms of the abbot, Bishop Hugh Oldham, and several major benefactors of the abbey. The abbot lived in chambers over the entry arch. Look for the spy hole used by the porter to watch people coming and going.

The Book of Cerne

One of the treasures of Cerne Abbey was a beautifully illustrated Anglo-Saxon book of prayers. This book was owned by the Bishop of Lichfield from AD 818-830 and was later bound with medieval manuscripts into one volume. It is thought to have been made in Mercia or Wessex. The book was taken from the abbey library at the Dissolution and was later sold by the Bishop of Norwich and Ely to George I. The king presented the book to Cambridge University, where it is now stored.

The abbey Guesthouse and Porch are on private land, behind South Gate House, at the top of Abbey Street. Admission is at the discretion of the house owner. I've visited twice, and the grounds have been open both times, with an honesty box set into the gate. Just pop the small fee into the box and follow the signs around the east side of the house, where you will see the abbey guesthouse.

The guesthouse is usually locked, but you can still examine the outside Just a bit further on the path leads to the Abbot's Porch, sheltered by trees. You can walk through the arch, where there are information panels explaining the history of the building and the abbey itself. 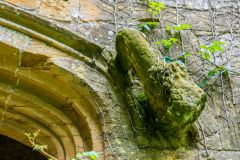 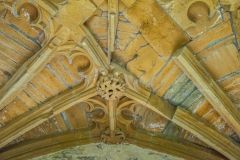 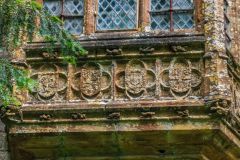 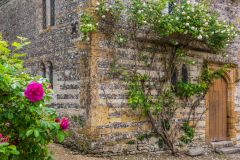 More self catering near Cerne Abbey