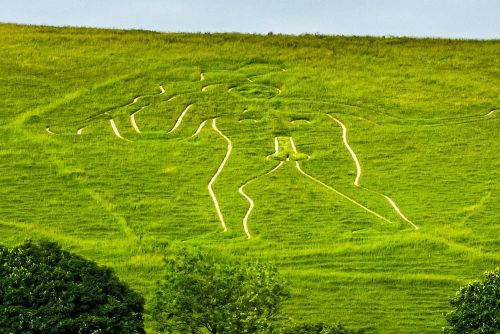 The striking giant of Cerne Abbas is a 180 foot high figure of a man bearing a 121 foot long club, incised into the chalk of the hillside. It has been speculated that the giant may have carried a cloak over his left arm and gripped a severed head in his left hand. If that is so, no evidence of either head or cloak now remains.

The giant has been variously identified as Roman and Celtic. His obvious, er, physical endowments have made him the source of fertility practices over the centuries; it is said that if an infertile woman spends the night within the figure, she will then be able to bear a child.

The name "Cerne" may be a reference to Cernunnos, a Celtic fertility god. During the 19th century, the ditches that make up the giant's penis were filled in with dirt by prudish Victorians.

No hard evidence exists about the giant's origin. Written records do not mention the carving until the mid 18th century, leading to speculation that the figure was not built until sometime around the English Civil War.

The similarity of the design of the giant to depictions of Hercules has led to more speculation that the giant was built sometime during the Roman occupation of Britain, probably in the 2nd century AD when the Romans resurrected the earlier pagan myth of Hercules.

Local legend tells a different story; the tale goes that a real giant from Denmark terrorized the neighbourhood. When he lay down on the hillside to sleep the villagers cut off his head. They then cut the outline as a warning to other giants.

The best views of the giant can be had from the A352, just north of the village of Cerne Abbas. Just up the hill and to the giant's right is a small enclosure called The Trendle, where May Dances were held.

In March 2020, scientists extracted soil samples from the Giant's feet and elbows. Over the following 12 months -- a process made much longer than normal by the coronavirus outbreak -- they analysed these soil samples to discover when individual grains of sand were last exposed to light. The results were initially confusing.

Examination of sand from the deepest layer revealed that it had been carved into the chalk in the late Saxon period between AD 700-1100.

However, examination of samples closer to the surface gave a date of up to 1560. Just to add to the confusion, the earliest recorded mention of the Cerne Abbas Giant comes from 1694, when a local churchwarden repaired it. Records from Cerne Abbey, founded in AD 987, do not mention the Giant at all, nor does a survey of the area in 1617 by the antiquarian John Norden.

A senior archaeologist with the National Trust speculated that the Giant was carved in the Saxon period, then neglected and lost under layers of vegetation for centuries, only to be rediscovered in the 17th century.

Open at any reasonable time.

More self catering near Cerne Abbas