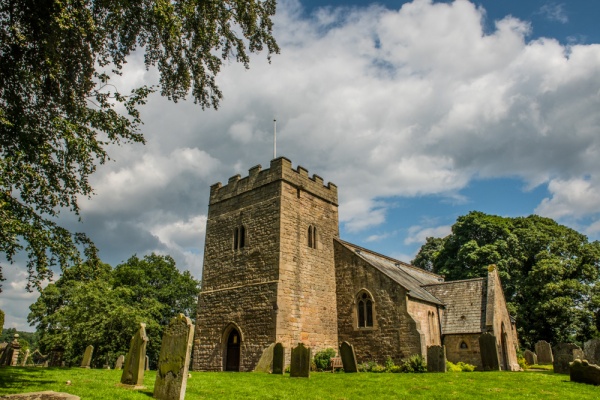 The Northumberland hamlet of Bywell boasts a medieval castle, 18th-century stately home, and not one but two Saxon churches. The first, St Andrew stands in a treed opening beside Bywell Hall. The second, St Peter, is further from the Hall and stands on a rise above the River Tyne. 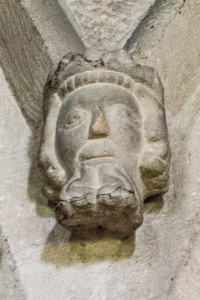 The history of St Peter's church goes back to at least the 9th century, when Bywell was one of the most important settlements in Northumbria. There was almost certainly a monastery here, and it must have been an important one, for in AD 803 Egbert, Bishop of Lindisfarne, was consecrated at Bywell by the Bishops of York, Hexham and Whithorn. One story suggests that the church was founded by St Wilfrid.

It seems likely that the first St Peter's served the monastery, and the neighbouring St Andrew's served the parishioners. Such an arrangement of a monastic church and a parish church close together can be found in several places around Britain.

Another, more fanciful tradition is that the churches were built by two sisters, but this has been discounted by historians.

St Andrews retains many of its Saxon features, but St Peter is almost entirely Norman. The oldest part of the church is the nave wall, built around AD 1050. You can see the original entrance, now blocked, in the north wall as you approach the church. Also on the north wall look for the discoloured stones that were turned red by the heat of a fire in 1285. 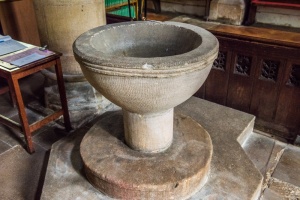 As you pass by the tower look for the blocked doorway high in the wall. Parishioners used to shelter from Border raiders in a small chamber there. Low on the south wall is a medieval scratch dial, a rare sight in northern England. On the central buttress is a memorial to Rev. Matthew Owen, a former vicar, dated 1699.

As you enter the porch look for deep grooves in the stonework made by parishioners sharpening their arrows. There are five stone crosses from medieval gravestones built into the porch walls.

The chancel is early 13th century, and is braced with unusual stone buttresses pierced by small niches. It is thought that these niches, or recesses, had an iron bar across so that worshippers could tether their horses.

Set into the church walls are carved medieval grave slabs. Many have symbols indicating the profession of the deceased. Females are usually indicated by shears, and men by a sword. 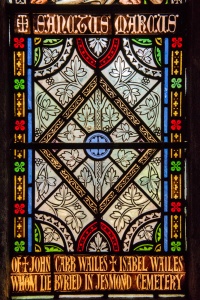 The churchyard is also full of interesting gravestones, many from the 18th century. Again, the carvings tell us a lot about the people buried there. Look for a gravestone carved with a scythe. Other stones have more religious symbols and signs of mortality, including an hourglass and a serpent swallowing its own tail.

The font is Norman, with a late Victorian cover. There are two bells, one dating to the 16th century and the second to at least 1400. Look for a carved head o a pillar depicting Edward I. Assuming the carving is contemporary, it must date to between 1272-1307 when Edward reigned.

Most of the glass is 19th century, but it is worth seeking out the memorial window to Curate Henry Parr Dwarris, who drowned in the Tyne opposite the church in 1855, at the age of just 33. Over the door to the tower room is a notice board from 1849 stating that the new seating in the church was to be free for the use of the poor forever.

This might not seem like a big deal, but until that point pews had been rented to those who could afford to pay for them, so the sign is a reminder of what must have seemed like a major social shift at the time.

With all the Norman and Saxon features, it is easy to miss the gates to the churchyard. These are relatively new by comparison with the rest of the church, being added in 1706.

In this case the great flood is not the Biblical one, but the devastating flood of 1771 which wreaked havoc along the valleys of the Tyne. The river rose so high and fast that one horseman had to ride his mount into the church for safety. The water kept rising, so he led the horse up the altar steps to a safe perch on the altar itself. There the horse stayed until the water levels dropped.

Ten houses were lost, and 6 people of Bywell drowned, but there was one happy story to come out of the disaster. A small baby in her cradle was swept out of her cottage and down the river as far as Tynemouth, where she was pulled from the waters, wet but still alive. She must have returned safely to Bywell, for the parish register records her as a witness to a wedding 20 years later.

Do take time to stroll over to St Andrew's which can be seen from the churchyard. 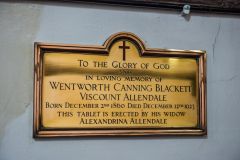 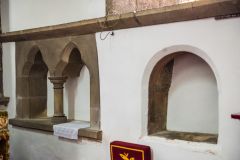