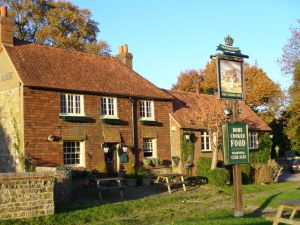 Noah's Ark pub, Lurgashall
A small, attractive village to the north of the Sussex Downs, in the shadow of Black Down. The village is of ancient origins and dates back at least to the Roman period. The most famous resident of Lurgashall was Alfred, Lord Tennyson, who lived at Aldworth House.

The beautiful historic church of St Lawrence dates to the Saxon period and is quite large for a building of that period. There is an unusual loggia, a kind of porch, with space for travellers to rest before services.

On the village green is Noah's Ark, a charming village pub that dates to 1557. For several centuries the pub baked its own bread and brewed its own ale, which it sold around the local area. This gave rise to popular rhyme, 'For well-baked bread and home-brewed ale, you must come to Lurgashale'.

More self catering near Lurgashall >>

More bed and breakfasts near Lurgashall >>