Hughenden, St Michael and All Angels

HERITAGE HIGHLIGHTS:   The memorial to Benjamin Disraeli by Queen Victoria is the only known one from a reigning monarch to a commoner. 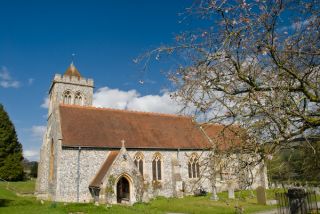 Hughenden, St Michael and All Angels

Most people come to Hughenden Valley to see Hughenden Manor, home of the Victorian politician and author, Benjamin Disraeli, Lord Beaconsfield, but the lovely little church of St Michael and All Angels is worth a visit as well. The church lies at the bottom of the hill that rises up to the manor house, just inside the manor gates.

At first glance, the church appears to be a rather restrained Victorian Gothic building, but there are ancient bones beneath the Victorian restoration. This so-called 'Church in the Park' goes back to the 12th century. Just uphill of the church itself is Church House, a lovely half-timbered 16th-century rectory (now private dwellings).

The first interesting feature of Hughenden church (aside from the superb setting) is to be found before even entering the building. Against the east wall is a fairly restrained (by Victorian standards) memorial to members of the Disraeli family, including Mary Ann, Lady Beaconsfield, wife of Benjamin Disraeli. Entering the church, the first point of interest is the beautiful tub font in Early English style, which dates to the 13th century.

On the wall by the font is an interesting old key. This formerly opened the church door. What is interesting is the small circle of iron set into the design of the key. This 'wedding ring' in the key was used in wedding ceremonies for the poor of the parish, who could not afford to buy a wedding ring of their own. Moving towards the chancel, you begin to see the extent of Victorian work at Hughenden. The chancel is richly decorated, as is the finely carved pulpit.

Immediately behind the pulpit, on the north wall of the chancel, is the monument erected by Queen Victoria to Disraeli. This is the only known example of a memorial by a reigning English monarch to a subject. Near the memorial are Disraeli's Banner and Insignia of the Order of the Garter.

These were transferred from St George's Chapel, Windsor (home of the Order of the Garter) to Hughenden on Queen Victoria's orders. Below Disraeli's monument is a glass window overlooking a 14th-century effigy of an unknown monk.

Behind the organ, a small door gives access to the chapel, where an intriguing example of Tudor attitudes awaits; against the east wall of the chapel are several apparently ancient tombs and effigies of knights, members of the Wellesborne family.

I use the word 'apparently' on purpose, for several of the effigies are forgeries, fakes carved to establish a heritage connecting the Wellesbornes to Simon de Montfort, 14th century Earl of Leicester. There are two upright carved stones, probably legitimate medieval memorials, to which later arms were added.

There are also three recumbent effigies, probably placed here at the same time that the de Montfort insignia was added to the other tombs. The effigies are fascinating as an insight into how desperate some Tudor families were to establish their own importance.

There is an authentic medieval treasure amongst the Elizabethan forgeries; against the east wall of the chapel is a small 14th-century memorial brass of a churchman, probably a vicar of Hughenden.

The setting is simply superb, and on a late spring afternoon the atmosphere is idyllic, despite the fact that the church is so close to the urban sprawl of High Wycombe.

Nearest Accommodation to Hughenden, St Michael and All Angels:

More self catering near Hughenden, St Michael and All Angels >>

More Hotels near Hughenden, St Michael and All Angels >>

More bed and breakfasts near Hughenden, St Michael and All Angels >>