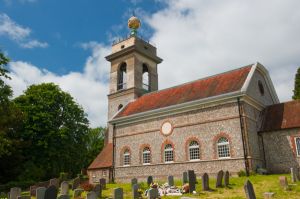 St Lawrence's church at West Wycombe may be one of the most famous of all parish churches in England, yet that fame owes little to its architecture or ancient origins. Rather, St Lawrence owes its popularity - or perhaps one should say, notoriety - to the eccentric Francis Dashwood, Lord le Despence and owner of nearby West Wycombe Park.

In 1763 Dashwood rebuilt the medieval parish church in the then stylish classical manner. He removed the arcades, making the nave into a large, open chamber. Almost all the furnishings date to the 1763 rebuilding.

The interior is filled with fantastic frescoes by Italian artists. The most impressive painting is on the chancel ceiling. Painted by Giovanni Borgnis, who also painted the Great Staircase at West Wycombe Park, this depicts the Last Supper.

The most famous feature is the large golden ball built by Dashwood atop the tower. This ball is hollow and has seating for 6 people within. Dashwood modelled the ball after a similar ball on the custom house in Venice. It is said to have been used by members of the infamous Hell Fire Club, founded by Dashwood.

What is known - or surmised - about the Hell Fire Club would fill volumes, but it seems clear that heavy drinking and carousing was an essential part of their activities, which were also said to include black magic. 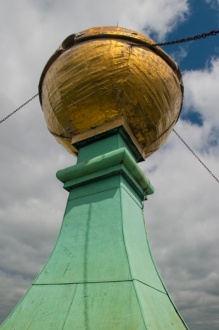 The oldest historic feature of the interior is a memorial brass to John Syot (d. 1475). There is a grave slab to Richard and Emma East (d. 1583). Later monuments include those of Lord Despence himself (d. 1781) and later members of the Dashwood family.

The changes made by Dashwood overshadow the medieval origins of St Lawrence's. The site was in use long before that, however; there was a hillfort here in the Iron Age. Within the 18th-century building are incorporated pieces of a 13th-century chancel and aisled nave, and a 14th-century tower. But it is the Golden Ball that continues to draw visitors to St Lawrence.

A short distance from the church is the family mausoleum erected by Dashwood.

Entry to the church is free but there is a small charge to climb the tower. You can't enter the golden ball, however! There are supposedly 100 steps inside the tower (I tried to verify this but lost count!), and the views from the top are fantastic. You can see for miles, and have a wonderful perspective over the nearby Dashwood Mausoleum. As of this writing, the tower is only open Sunday afternoons, but please check before making a special trip. 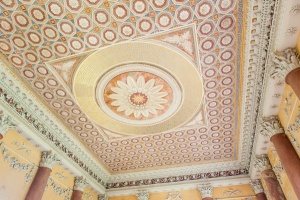 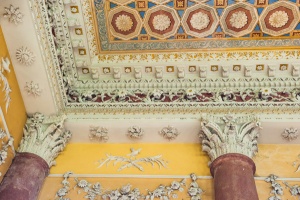 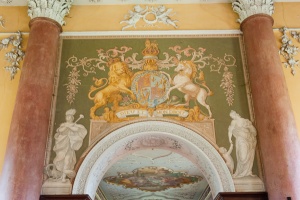 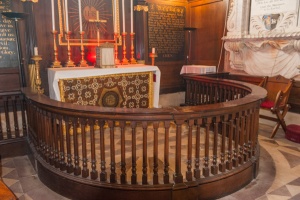 The altar and communion rails 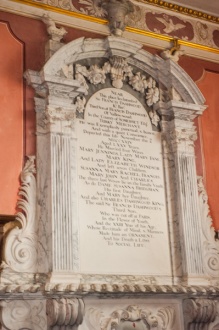 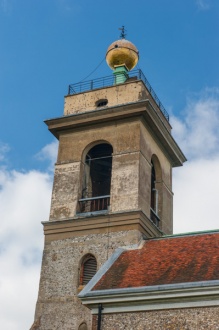 The tower and Golden Ball 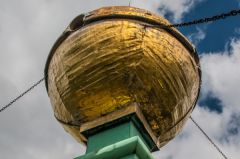 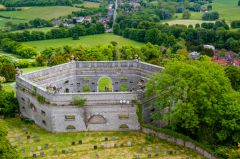