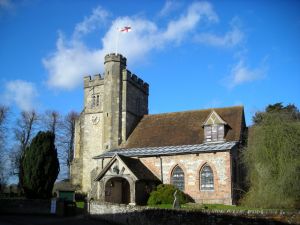 Little Missenden, St John's Church
An early 12th-century church boasting a very nice series of 13th and 14th-century wall paintings mixed with later 17th-century paintings. Though the oldest parts of the current building date to the 12th century, there was a church on this site since about AD 975.

St John the Baptist church is composed of an aisled nave, chancel with large north chapel, south porch, and west tower. The tower has an external stair rising high above the parapets. The church exterior presents a lovely picture, located in beautiful Chiltern countryside, but it is the interior that is the real treasure.

The interior is filled with a lovely set of paintings spanning 4 centuries or more. Most were hidden until revealed during repairs in 1931. The earliest date to the 13th century, but over time these were overlaid in places with later paintings, and eventually by a series of 17th-century text scrolls. The east and north walls of the nave are particularly richly painted.

The best painting is a quite wonderful depiction of St Christopher carrying Christ. This large figure dates from the 15th century and stands directly opposite the main entrance. Throughout the rest of the church are scattered other interesting paintings, including Christ in Majesty, a life of St Catherine of Alexandria, and a Crucifixion scene.

In the chancel is a memorial brass to John Style (d. 1613), and there are grave slabs to later generations of 17th century Styles.