HERITAGE HIGHLIGHTS:   The early Norman castle mound known as Dane John rises in one corner of the garden 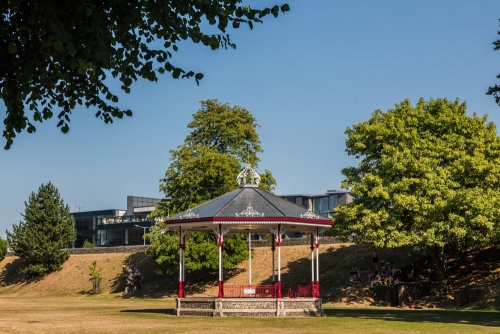 Dane John Garden is Canterbury's largest and most popular public park. The intriguing name comes from an English mangling of the Norman French 'donjon' (forerunner of our word 'dungeon'). In this case, the term does not refer to a prison, but to an early Norman castle founded by William the Conqueror.

Shortly after the Conquest, William established castles at Canterbury, Dover, and Rochester. These were simple wooden structures atop a high mound, or motte. The high castle mound, known locally as Dane John's Mound, gives its name to the garden. However, the mound itself was in existence well before the Norman Conquest; it dates to at least the 1st century AD. 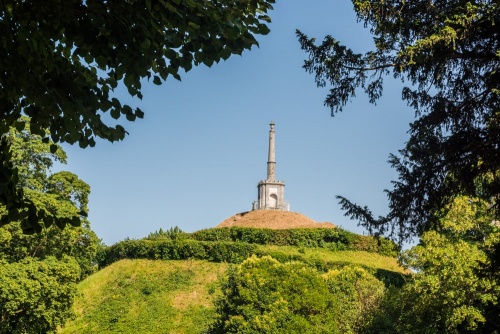 The park containing the garden was in place by 1551, but the formal gardens that stretch out at the foot of the mound were laid out around 1790 as a gift to the city by Alderman James Simmons. A memorial obelisk to Simmons stands at the top of Dane John Mound. The memorial was erected by public subscription in 1803.

Simmons, whose grave can be seen at St Mildred's church, created a garden bounded on one side by an avenue of plane trees and on the other side by the old city walls. There is a play area, fountain, and bandstand where open-air events are held. Visitors and residents alike enjoy walks along the city walls, which give great views across the city.

This conical hill is thought to have begun as a Roman cemetery, created sometime during the Roman occupation of the area, between the first and fourth centuries AD. When William the Conqueror wanted to create a stronghold to exercise control over the city, he re-used the existing mound to create a typical Norman motte and bailey fortress, with a timber palisade atop the mound and an enclosure extending from the base of the mound. 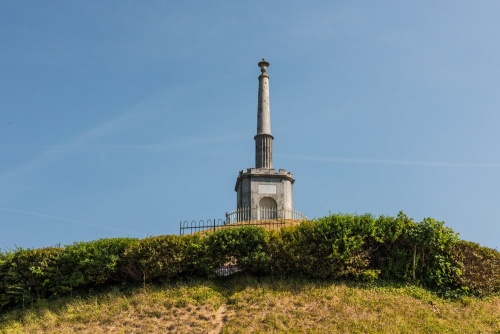 The castle remained in use for only a few decades and was abandoned when Canterbury Castle was begun in 1123.

At the base of the mound is a pair of ammunition storage tunnels created during WWII. 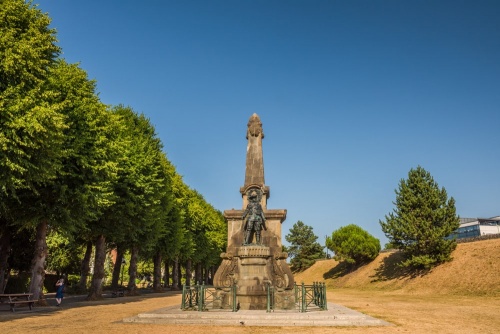 In the centre of the public garden stands a memorial to the dead of the Boer War in the form of a tall obelisk and a statue of a soldier. The memorial was erected in 1903 and commemorates soldiers of the East Kent Yeomanry and The Buffs who died in the South African conflict from 1899-1902.

Plaques on three sides list the names of the fallen, while on the fourth side is a life-sized sculpture of a soldier with a slouch hat and bandolier. The sculpture faces toward South Africa. 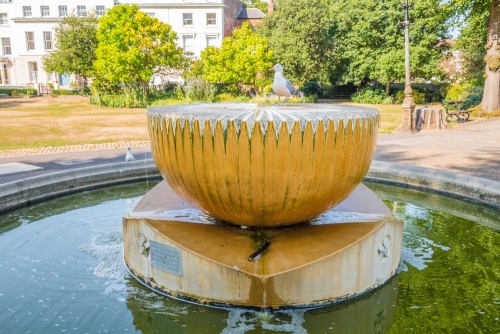 In the centre of the garden is a modern sculpture in Portland stone, created by Joss Smith in 1999 and entitled Font. This replaces a Victorian water fountain. A drinking fountain at the western end of the garden was a gift to the city by Dr Frank Wacher in 1927. Wacher was the medical officer for Canterbury for 50 years. He was granted the freedom of the city on his retirement and gave the fountain to the city in gratitude. 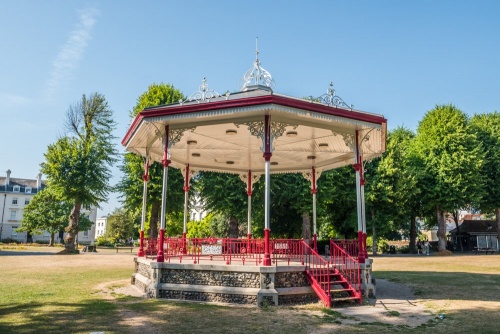 In the southern half of the garden, near the base of Dane John Mound, is a replica of the garden's original Victorian bandstand. The original bandstand was dismantled in WWII to be used as scrap metal for the war effort. 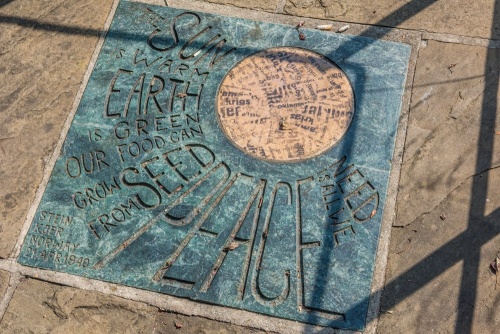 The Peace Pavement, one of sixteen sculptured paving stones

At the eastern end of the garden is the Peace Pavement, a moving art installation in the form of a paved walk decorated with sixteen unique paving sculptures created by artists from European cities damaged by war during the 20th century. British cities represented are Coventry and Canterbury itself.

A few steps away from the Peace Pavement is a sculpture entitled Silent Table, also created by Joss Smith in 1999. The sculpture takes the form of huge Roman pots left abandoned on a table, a reminder of the garden's long history. 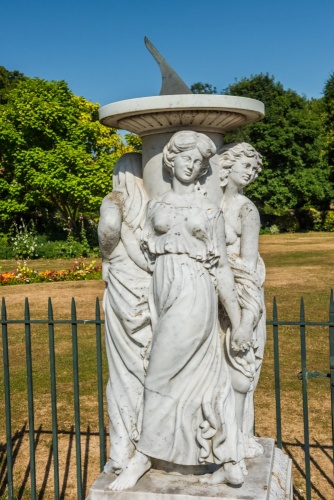 In the northern part of the garden is a Victorian sundial sculpted by Henry Weekes and erected in 1840. Weekes was a native of Canterbury and is best known for creating the Manufacturers group of sculptures for the Albert Memorial in London and also created the first bust of Victoria after she took the throne.

Dane John Garden can be accessed from several points. It is directly on the course of the city walls, in the south of the city. It is bounded by Rhodaus Town and Pin Hill to the south and by Castle Row to the west and Watling Street to the east. You can also reach it via St Mary Street to the north. It is an easy ten minute walk from the cathedral. 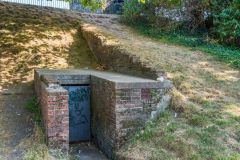 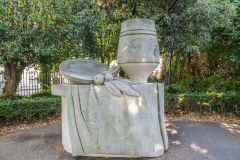 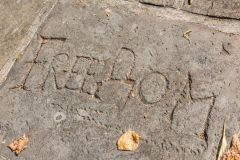