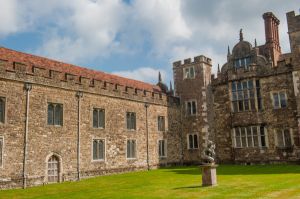 Knole House
In 1456 Thomas Bourchier, Archbishop of Canterbury, purchased the 12th-century estate of Knole from Lord Saye and Sele (see Broughton Castle). Under Bourchier's influence, an older medieval manor was transformed into a house that probably resembles an Oxford college more than it does a typical stately home.

The situation on top of a low hill, or knoll, gave the house its name. It was perhaps the location, half hidden from view on its tree-covered hill, that drew the eye of Henry VIII. Henry dropped a broad hint to his own Archbishop, Thomas Cranmer, that he could quite happily live at Knole.

Cranmer, being no fool, and rather desirous of keeping his head on his shoulders, promptly made a gift of Knole to the covetous king. He may have lost his estate, but he kept his head, though he only survived long enough to be burned at the stake by Henry's daughter Mary.

Knole remained in royal hands until in 1566 Elizabeth I leased it to her cousin, Thomas Sackville. In 1603 Sackville purchased the freehold outright, and the story of Knole and the Sackville families has been intertwined since that date. 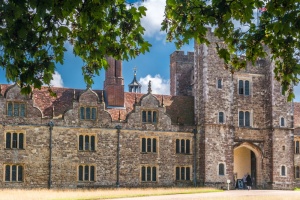 The outer gatehouse at Knole

Knole is arranged around two courtyards, like Oxford quads. A grand gatehouse reminiscent of Hampton Court Palace leads to an inner court, called Green Court, then another gatehouse leads into Stone Court, an inner sanctum, more intimate in character, around which are arranged all the main staterooms.

One of the gate towers is called Shelley's Tower, not for the poet but for a mistress of the 3rd Duke, Giannetta Baccelli, a dancer the Duke met in Paris and brought back to Knole. It seems that 'Shelley' was the closest the household retainers at Knole could come to Giannetta's name.

ou pass from the Stone Court through a collonaded entrance into the medieval Great Hall, a high-ceilinged chamber hung with large family portraits and beautifully carved panelling darkened with age. One of the paintings is that of Thomas Sackville, 1st Earl of Dorset, a career politician who served both Elizabeth I and James I. He is shown wearing his sash of office as Lord Treasurer, a large key hanging from the sash. That self-same key now hangs for real from the gilded portrait frame. 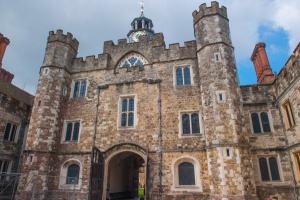 You pass from the Great Hall to the bottom of the Great Staircase, one of the most magnificent Jacobean pieces of woodwork in an English house. At the base of the stair lies a nude sculpture of Giannetta Baccelli, returned to public view after it was exiled to an attic by the 3rd Duke when he brought a wife to Knole.

The stair itself is a treat for the senses, decorated with heraldic devices, with astonishing grisailles wall paintings in ebullient classical style. At the top of the stair is the Brown Gallery, one of the showpiece chambers at Knole, a long and narrow gallery lined with wooden panelling, historic portraits, and some of the fine furniture for which Knole is justly famous.

How did the Sackvilles acquire such a large collection of fine furniture, especially 17th century Stuart furniture? Well, the story goes that Charles Sackville, the 6th Earl of Dorset, served as Chamberlain of the Household to William and Mary.

One of the perquisites of his position was that Sackville could dispose of any furniture deemed out of fashion or outmoded. It helped that the new monarchs did not want reminders of the previous regime, so Sackville was able to remove not just a chair or two, but practically all the royal Stuart furniture from Windsor Castle and Hampton Court Palace.

So assiduous was the Earl in his 'removal' that Knole now boasts the largest and most impressive collection of royal Stuart furniture in the world. 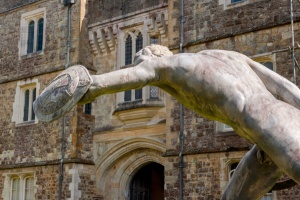 A classical statue in Green Court

Off the end of the Brown Gallery are a series of smaller, but still quite ornate chambers, including the Spangle Bedroom, named for the sequins that once adorned the huge four-poster bed.

Another bedchamber is the Venetian Ambassador's Bedroom, so-named after a visit by that worthy. In the bedroom is an exhibition of 3 tapestries created by Francois Spierling in about 1600 and a bed made for James II in 1688.

Near the entrance to this chamber, displayed in a glass case, is the original early 17th century 'Knole Settee', with its arrangement of hinged drop-ends that inspired the modern sofa. Unlike the ubiquitous sofa, the original Settee was intended for formal occasions, used by the monarch to welcome important guests.

Another hugely impressive chamber - huge in every sense - is the ballroom, decorated with an astonishing frieze depicting monsters, mermaids, and gryphons. The Reynolds Room displays a collection of portraits by Sir Joshua Reynolds, including a famous likeness of Wang-y-Tong, a Chinese page brought to Knole by the 3rd Duke. Wang attended Sevenoaks School, where he was called Warnoton by locals who could not pronounce his Chinese name.

One final chamber worth noting is the King's Bedroom, made for a visit from James I, with solid silver furniture and a four-poster bed topped by plumes of ostrich feathers. The bedclothes glitter with gold and silver thread.

Knole seems like a Jacobean time capsule, a place of dim corridors and dark panelling, where history lingers, and it almost comes as a surprise when you emerge at last, blinking in the sunlight. It is arguably Britain's largest house - depending how you calculate these things, with 7 courtyards for the days of the week, 52 staircases for the weeks of the year, and 365 rooms for the days of the year. It truly is one of the great houses of England, a place you could return again and again, and discover something new each time.

Perhaps you've been to Hampton Court Palace. Imagine a slightly smaller version, taken from the suburbs and planted in the "last (Kentish) medieval deer park". That's Knole. Similar brick, similar shape. The main house is reached through two courtyards surrounded by high walls. Like Hampton Court, it was built by a churchman - the Archbishop of Canterbury, and gifted [cough, cough, excuse me] to Henry VIII. He must have liked this style.

As for the interior, a later Sackville owner certainly liked oak panelling. With the exception of the hall and stairs, the latter of which shows a spiritual journey on the wallpaper, most rooms are covered with dark oak, and depictions of Green Men. Keep an eye out for the Sackville crest (the most recent owners), which involves a big cat with very long teeth.

Knole is notable for its portraits. It has three long galleries filled with fine portraits, regularly cleaned and examined at the National Portrait Gallery. One gallery is dedicated to cartoons - life-sized drawings and paintings that, generally, tell stories. These were admired almost in the same way we now watch tv. Off this is the King's Room, which is shining, glittery, and gilded everywhere.

One more curiosity to mention: in the room with the billiard table you'll find a two or three-foot pedestal with a large and decorated globular top. It's an Early Modern space heater made for the Pope. The hollow space inside the globe would be filled with hot coals, warms the whole room, and would probably cook anything that came into contact with it.

When you finish with the house, take a walk around the deer park. It's well worth it. In some places the landscape is more what you would expect in the Lake District than Kent, a beautifully rugged yet lush landscape.

More self catering near Knole House >>