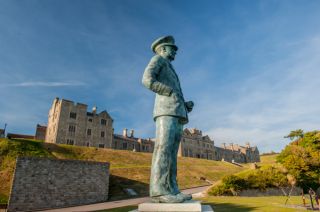 Dover
Dover has been an important port since Roman times when Julius Caesar chose this spot to land his invasion forces. The most famous landmark associated with Dover are the famous 'White Cliffs', one of the most easily recognisable of British icons. But there is more to Dover than the cliffs.

Dover Castle was begun immediately after the Norman Conquest in 1066 and extended in the 13th century by King John. Allied forces in WWII used King John's underground tunnels as part of the command centre, and these tunnels can be explored by visitors.

Another of Dover's many outstanding historic remains are the surviving bits of St Martin's Abbey. The Abbey was established in 1131 but disbanded during the Dissolution of the Monasteries. Many of old abbey buildings are incorporated into Dover College. Just outside Dover are the ruins of St Radigund's Abbey, founded in 1191.

More self catering near Dover >>

More bed and breakfasts near Dover >>