HERITAGE HIGHLIGHTS:   The superb Norman cathedral has roots going back to the 7th century 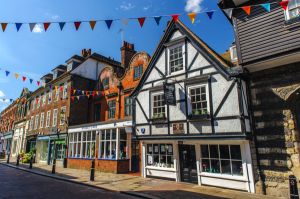 Rochester is one of the most historic places in a county replete with history! Rochester stands on the old Roman Watling Street and boasts a cathedral, medieval castle, Carolingian mansion, and a 13th-century manor owned by the Knights Templar.

The cathedral is Rochester's pride; it is primarily 12th century, and is an excellent example of Romanesque style. The first cathedral was established by King Ethelbert in AD 604. This early building was completely rebuilt by Bishop Gundulf following the Norman invasion.

The talented Gundulf was also responsible for the nearby castle and the Tower of London. The cathedral was damaged by King John's soldiers during the siege of Rochester Castle in 1215, and again by soldiers following Simon de Montfort in 1264. An old story says that Henry VIII met Anne of Cleves, his 4th wife, in the cathedral cloisters. 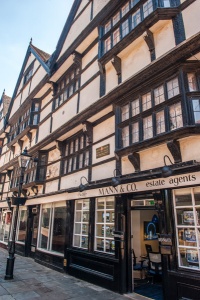 A timber-framed building
on High Street

The historic castle stands beside the River Medway, on the site of a Roman fort. The most impressive feature is the Norman keep, the largest in England, which reuses stone from the Roman city walls. The original Norman fortress was made of timber, rebuilt in stone by Bishop Gundulf in the late 11th century.

The imposing keep was added by William de Corbeil, Archbishop of Canterbury. The most dramatic episode the castle's history came in 1215 when rebellious barons held the castle against King John. The king besieged the castle and had his engineers build tunnels under the walls. The tunnels were set on fire, using the fat of 40 pigs, causing a section of the keep to collapse.

From the castle keep you can look down on the superb west front of Rochester Cathedral.

On the High Street is the historic Guildhall, built in 1687 and featuring beautiful plasterwork ceilings. The historic interiors are now home to the Rochester Museum, tracing the rich heritage of the town and the Medway region. a special exhibit tells the story of Charles Dickens and his ties to the area. Another highlight is a rare set of 18th-century tools used by cabinet-makers. 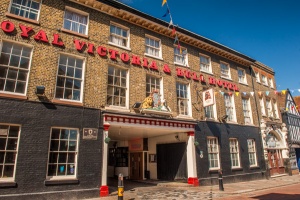 Tucked away on Crow Lane is Restoration House, so named because Charles II stayed here on the eve of his restoration to the British crown in 1660. The house began as a pair of medieval dwellings, but in the early 17th century the houses were combined into one and an elegant townhouse created for a wealthy lawyer.

The interiors were specially refurnished and decorated to welcome Charles II and have now been restored to reflect the way they looked when the future king stayed here.

In the heart of Rochester stands this historic Elizabethan town house, built for Sir Peter Buck, Mayor of Rochester. Eastgate House later served as the town museum and as a boarding school. The house features in a pair of works by Charles Dickens, The Mystery of Edwin Drood and Pickwick Papers. The writing chalet that once stood in the garden of Dickens' home at Gads Hill has been reassembled in the garden of Eastgate House.

Across the River Medway from central Rochester is Strood, where you will find Temple Manor, a 13th-century house once owned by the Knights Templar. The manor was built around 1240, but when the Templar lands were seized by the crown in the early 14th century Edward III gave the manor to the Countess of Pembroke. The highlight at Temple Manor is a set of medieval wall paintings decorating the first-floor hall.

Rochester has strong links to Charles Dickens, who lived at nearby Gad's Hill for many years. There are two annual Dickens festivals to celebrate the popular author and his works. 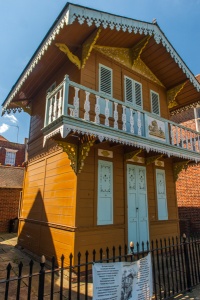 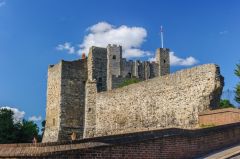 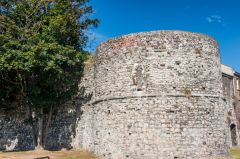 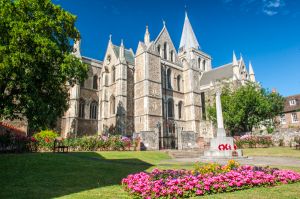 More self catering near Rochester >>

More bed and breakfasts near Rochester >>