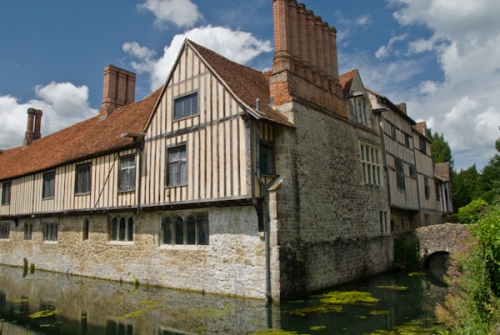 Ightham Mote is one of the best preserved, and certainly one of the most beautiful, moated manor houses in England. The house dates back to the 14th century. The name presents a challenge to linguists; Ightham may refer to an early settler of the region, named Ehta or Ohta. Mote may refer to the moat which surrounds the manor, or it may equally well be a derivative of 'moot', a gathering place.

The manor is arranged as four wings around a cobbled courtyard. The house is approached over a footbridge across a moat, which laps at the outer walls of all four wings. The original 14th-century house was composed simply of a great hall with a cluster of other domestic buildings and one bridge giving access on the west range. By the 15th century there were four wings, and a second bridge on the northwest range. In the 16th century, a grand Gatehouse Tower was added on the west range.

The current 'olde worlde' half-timbered look may give the wrong impression of Ightham Mote's history. For much of its existence, the walls would have been covered with plaster or render.

The first known owner of Ightham Mote is Isolde Inge (1330-1360), who may be responsible for building the oldest surviving part of the house. It was the next owner, Sir Thomas Cawne (d. 1374) who built the basis of the house we see today. Cawne is buried in the parish church at Ightham, two miles to the north of the house.

Ightham Mote had several illustrious owners through the subsequent centuries, including Sir Richard Clement (d. 1538). Clement was Sheriff of Kent and a courtier at the courts of Henry VII and Henry VIII. A later owner was Sir William Selby, who also served as Sheriff of Kent. Selby is buried at Ightham church, along with his wife Dorothy, both of whom have very grand tombs, well worth a short trip to see.

The last owner of the manor was Charles Robinson. When he died in 1985 he donated the house and estate to the National Trust.

Visitors to the house follow a circular route, beginning in the courtyard. One feature to look for there is a large stone and wood kennel, which dates to the Victorian period. The doghouse is so elaborate that it has been declared a listed building in its own right! In the centre of the courtyard is an old well-head that now functions as a fountain.

Opposite the entrance tower is the Great Hall, built around 1330. The great window was added around 1480 by Richard Haute. The whole is framed with Tudor barge boards that are beautifully carved with leaves, vines, and floral emblems including royal Tudor symbols. Within, the Great Hall is a superb room, with a high, vaulted ceiling and lovely panelling, the work of Victorian architect Norman Shaw. The vaulting is supported on cunningly carved corbel figures.

Indeed, woodcarving is a feature throughout the house; the carving, notably on the staircase, is quite wonderful. Look for the newel post in the shape of a Saracen's head, the symbol of the Selby family. 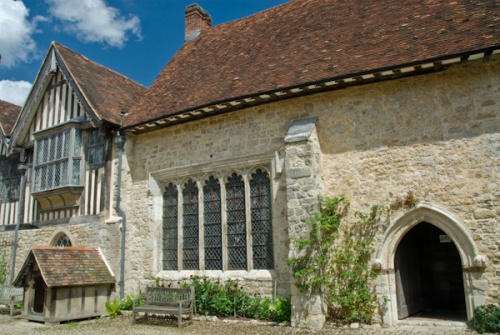 The tour of the house passes through a series of servant's rooms, including the Housekeeper's Room and the Butler's Pantry. It also takes in the Crypt, a beautiful vaulted 14th-century undercroft.

Highlights on the second floor of the house include the Old Chapel, built above the Crypt, and the New Chapel, built around 1480. This latter is a wonderfully panelled chamber with carved box pews, which also boasts a 16th-century Spanish cross. The real treat, however, is above your head; look up, and marvel at the painted 16th century barrel-vaulted ceiling. Here there are Tudor symbols everywhere, including red roses, the Beaufort portcullis, and the castle representing Henry VIII's first wife, Catherine of Aragon. Further symbols are a quiver of arrows (also for Catherine of Aragon), the fleur-de-lys of France, and the roses of Lancaster and York.

Facing the west front, well away from the moat, is a lovely row of half-timbered cottages, which date to 1475. These were used for stabling and other work purposes, but in the Victorian era they were converted into staff quarters.

A persistent story, which may or may not be true, says that during the Civil War a troop of Cromwell's Parliamentarian soldiers were intent to ransack Ightham Mote. The soldiers got lost in the maze of winding lanes in the Ightham area and ended up ransacking another nearby house by mistake.

The manor has been the subject of on-going preservation work, and exhibits let visitors see details of how this historic building has been protected and preserved.

Ightham Mote is a real treat, a historic manor that deserves a visit time and time again.

More self catering near Ightham Mote >>