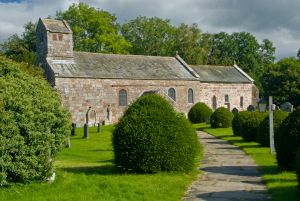 Set on a rise over the River Eden in a lovely village, All Saints is a gem of a historic church, containing intriguing features. The first of these can be seen to the left of the south porch as you approach down the entrance avenue of clipped yew trees.

A fascinating effigy of a woman is set into the exterior wall. The carving, and the detail of the woman's garments, suggest a date of sometime between 1200 and 1400. As her head is lying on a pillow, it suggests that the effigy was intended to be prone, and may have come from an early coffin lid.

The second intriguing architectural feature of the church exterior is to be found around the back of the church, where the old north door has been blocked up. Above the Norman doorway arch are two red sandstone blocks. That to the right contains a very worn inscription, now so badly eroded as to be almost invisible. However, recorded observations from an early survey of the church suggest that it once read:

Now if your Latin is as bad as mine you'll be relieved to learn that we have a partial translation; 'Sir Lawrence De Vere gives to the men of Bolton ...' which suggests that this is a dedication by the said Sir Lawrence, noting a gift. What gift? Well, that's where the other stone comes in. Upon this stone is a relief carving; a fascinating depiction of two knights engaged in a joust. This may, in fact, be completely unique as a carving in an English church.

A closer study of the knights reveals that they are wearing mail shirts and kite-shaped shields of a style used during the reign of Henry II (1154 - 1189). One of the knights is smaller and of inferior rank, if we can judge because he bears no banner on his lance. The lesser-ranked knight has broken through the guard of his opponent, and his lance is thrust under the nasal guard of his opponent's helmet. One suggestion is that the carving commemorates a tournament held locally.

So much for the exterior of the church, but spare a glance for the interior, too. You enter through the south door, which has attractive late 12th-century Norman carvings. To the left is a figure holding a pair of staves, to the right a figure with wings.

To the right of the door on entering is a poor box, inscribed with '1634. The Poor Man's Box.' Near the chancel arch is an oak strongbox, probably 16th century.

The interior is attractive, but it is really the exterior carvings which make All Saints such an enjoyable church to visit.

More self catering near Bolton, All Saints Church >>

More bed and breakfasts near Bolton, All Saints Church >>