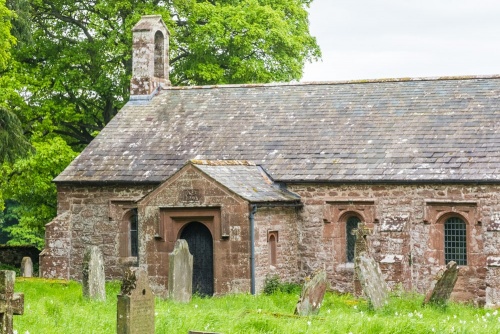 Set in fields beside a bend of the River Eamont is St Ninian's Church, also known as Ninekirks. The setting is superb, offering views east to the Pennines and west to the Lake District fells. The church is built of local red sandstone.

Tradition suggests that the church was founded by St Ninian himself in the early 5th century, as the saint was travelling to the Isle of Whithorn, across the Solway Firth in what ias now Dumfries and Galloway. There could be truth to the story, as a hoard of coins dating to the period between AD 400-600 was discovered near the church site.

The earliest written record of a church here comes from the year 1393 when a chapel of ease was recorded as part of the Brougham Estate, owned by the Clifford family since 1273. 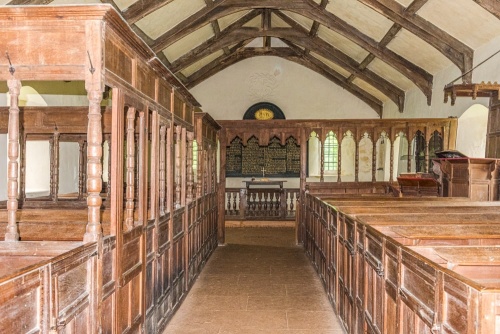 Over the medieval period, parish services were usually held at St Wilfrid's Chapel in Brougham, while Ninekirks was used for festival services and as a burial site.

By the 17th century the medieval building was badly decayed. The church was almost entirely rebuilt in 1660 by Lady Anne Clifford, Countess of Pembroke, the amazing woman who helped restore so many Cumbrian churches and castles.

Lady Clifford inherited the local Brougham estate, including nearby Brougham Castle. She rebuilt Ninekirks, and other local churches including the parish church of St Wilfrid in Brougham village. Her initials can be seen in the plasterwork above the altar (A.P. for Anne of Pembroke). 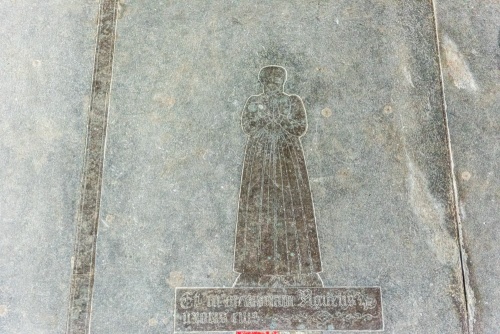 It is slightly confusing that a datestone engraved with '1841' is set over the south porch entrance. The stone refers to the date that the porch was added, not the date when the church was rebuilt.

The interior is simple, but has a great historic appeal as it is essentially unchanged since 1660. The whitewashed walls set off the windows fitted with clear glass, and make the interior bright. The oak fittings are well carved and include box pews (and canopied family pews for the local aristocracy), and triple-decker carved pulpit with sounding board.

Unusually, there is no division between the nave and chancel. 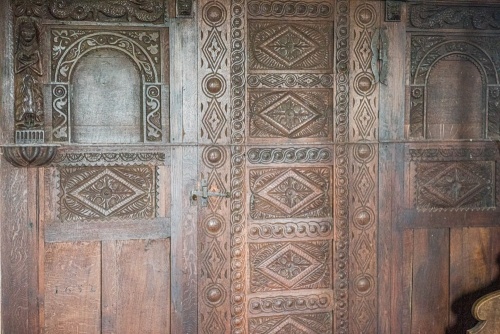 Jacobean panelling in the chancel

Over the south door, by which you enter the church, is a medieval stone corbel shaped like a human head. This is presumably a survivor from the Norman church. Inside the door is a large medieval oak chest.

In the chancel floor are three heavy wooden trap doors. These protect medieval grave slabs thought to be those of the father and son, Odard and Gilbert de Burgham. There are three funeral hatchments on the nave walls, to later members of thew Broiugham family (note how the family name changed its spelling over the centuries).

On the south side of the chancel, surrounding the priest's door, are beautifully carved wooden panels thought to have come from a Jacobean vestment chest. Set into the floor near the communion table are brasses to members of the Brougham family, some dating to the 16th century. 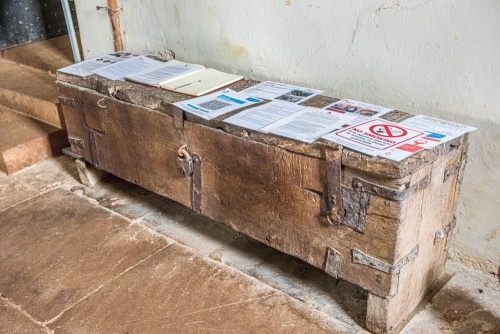 The wooden communion table stands on a stone slab that served as the altar table of the medieval church.

Outside the church is evidence of the deserted medieval village that once stood here. Field boundaries, pits, and enclosures surround the church. Around 1914 a hoard of coins dating to the late Roman or early Saxon period was found in the churchyard. Another unexpected find occurred in 1846 when repairs to the chancel turned up a gilt cup dated to the 8th century.

In a corner of the churchyard is a ruined, roofless building which acted as a stable for the parson, who rode a horse and trap to services. A mounting block stands just inside the churchyard gate. 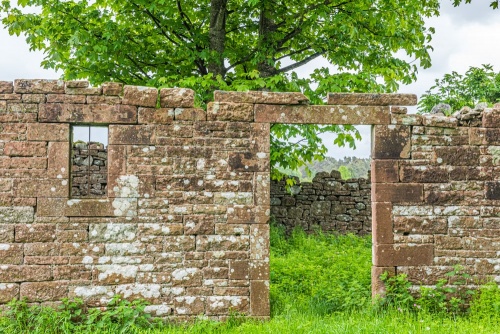 St Ninian Ninekirks is not the easiest church to find. Head east from Penrith on the A66 and after three miles park in the layby on the north (left) side of the road, opposite Whinfell Park Farm. Be aware that the layby is not signposted!

There is a track across the fields to the church, about a mile distant. The trail passes through fields where sheep graze, with steep cliffs to the left, before dropping down to the church.

Be aware that there is no electricity, so the interior of the church can be quite dim, especially on a cloudy day.

On the other side (south) of the A66 is the Countess Pillar, a 17th-century memorial erected by Lady Anne Clifford in memory of her mother. 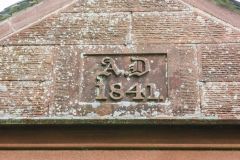 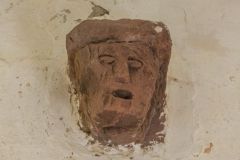 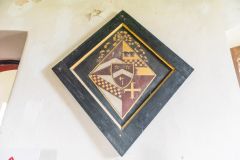 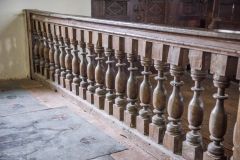 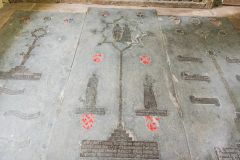 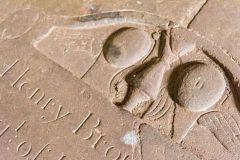 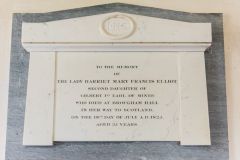 About Brougham, St Ninian Ninekirks
Address: Off the A66, Brougham, Cumbria, England, CA10 2AD
Attraction Type: Historic Church
Location: 3 miles east of Penrith off the A66. Parking in a layby opposite Whinfell Park Farm (on the north side of the road). From car park follow farmer's track for about 1 mile alongside the River Eamont to the church
Website: Brougham, St Ninian Ninekirks
Churches Conservation Trust
Location map
OS: NY559299
Photo Credit: David Ross and Britain Express