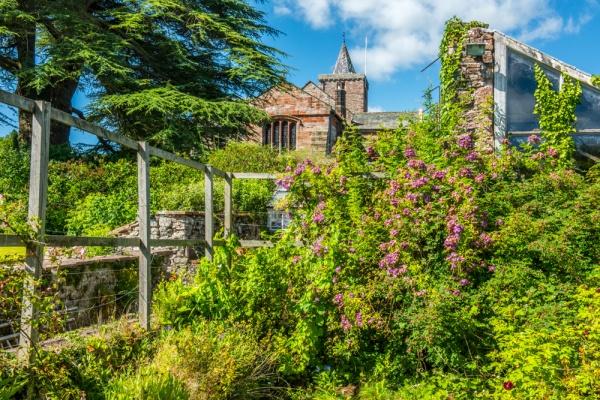 Morland House is a picturesque Tudor vicarage set in an idyllic Cumbrian village a short drive from Penrith. The house was built in the mid-16th century, then enlarged in the Georgian period when it was given an elegant 18th century facade, and again in the 1870s. The Victorian restoration curiously rebuilt the house in Tudor style, so that what we see today is an original Tudor house rebuilt to look like ... a Tudor house. 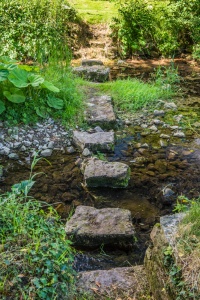 The house is not usually open to the public, but serves as a holiday home. It has been the home of the Markham family since 1828.

The gardens surrounding the house are open, however, and are free of charge to Friends of the Historic Houses Association.

The gardens at Morland House date primarily to the 1880s, though some features are much older. The gardens stretch to four acres laid out on several levels between the historic Saxon parish church, the House, and Morland Beck.

Immediately in front of the house is a wide lawn leading to a formal walled garden, with a rose garden centred on a sundial, with clipped lawns and a glasshouse at the rear. Though this area is pretty, the real magic at Morland House happens when you descend stone steps towards the Beck.

Here a series of winding trails lead along waterside terraces, crossing the Beck on a series of footbridges, and if you are brave, stepping stones. Above the waterway is a quarry garden, where garden beds and water features are laid out in an old quarry and a trail leads around the quarry rim. Nearby is a grotto, a popular feature in the picturesque neoclassical gardens of the 18th century. There is also a memorial to Canon Gervase Markham, in the form of a standing stone. 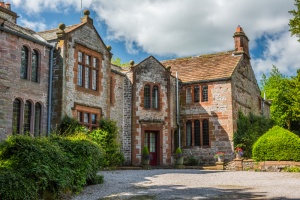 Walks lead towards a historic mill on the edge of the property. Other features include a rose garden and an orchard. Three waterfalls grace the beck, and natural cliffs rise alongside.

Morland House is well signed in the village centre. At first glance, we weren't sure we were supposed to follow the drive leading to the house, but we spotted a small HHA sign for the gardens. When we arrived there were no signs, just a wide place to park in front of the house. Since there didn't seem to be anyone about and we were HHA members we just began to explore the gardens. 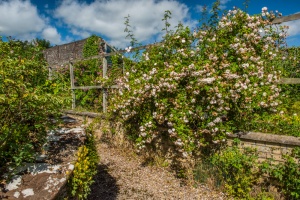 At first glance, the gardens seemed small, but once we descended into beck-side area the garden took on a whole new character. Lushly planted paths diverged and wandered this way and that in a bewildering and totally enjoyable way. We soon found ourselves completely lost and enjoying every twist and turn.

The sound of rushing water along the beck was a constant background noise, and paths opened up to give glimpses of the water, footbridges, cascades, stepping stones, and the pretty mill buildings.

We didn't see a single soul the whole time we were making our way around the gardens, but that just added to the delight of exploration. Near the formal walled garden, we discovered a private entrance into the churchyard, so we strolled over to enjoy the church, which boasts the only Saxon tower in north-west England.

Morland is a delight, a small garden, yet full of interest, especially during the summer months. Seasonal highlights include snowdrops and aconites in winter, daffodils in March, and tulips in April and May. The roses are at their best in June, and from July to October the herbaceous borders are lush with colour.

The gardens are located 8 miles south-east of Penrith, with easy access from the M6.

Note:
Do not confuse the house with Morland Hall, a much larger historic house on the edge of the village. 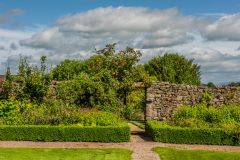 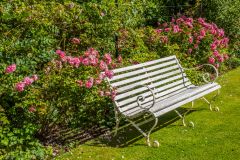 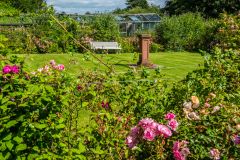 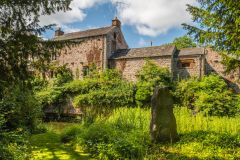 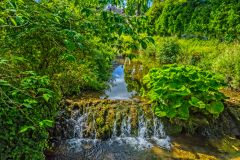 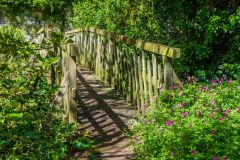 Self Catering near Morland