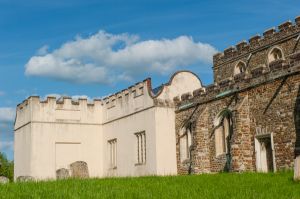 De Grey Mausoleum
A superb family mausoleum attached to Flitton church, housing the memorials to generations of the De Grey family, holders of nearby Wrest Park. The mausoleum is possibly the largest and most magnificent sepulchral chapel attached to an English church.

There are 17 monuments within the De Grey Mausoleum, forming one of the finest collections of family funerary monuments in England. The earliest dates to 1614, and the final monument was erected in 1899. The mausoleum was founded in 1605 by Henry Grey, the sixth Earl of Kent. Grey was the first to be buried in the mausoleum, though like subsequent family members his body actually lies in the family vault beneath the mausoleum, not under his memorial.

The Earl called his creation a 'little Chappell or buryall place'. It may have been little when he began it, but it is not little now.

The mausoleum is built of brick, whitewashed in the late 19th century, and topped by a parapet to match the Gothic style of the earlier medieval church. It is laid out on a cruciform plan, with a long west wing leading to a crossing flanked by square transepts, and on to a slightly larger east end. The oldest monuments are in the west wing, or nave, with the monument to the 6th Earl almost opposite the entrance door in the south-west wall.

The chapel was extended between 1705 - 1710 by another Henry Grey, the 1st Duke of Kent. The Duke wanted to create a light, spacious chamber to reflect the growing stature of his family. Many of the Duke's children died during his lifetime, including Anthony, his eldest son, who is depicted on his monument in classical Roman attire.

The last De Grey monument in the mausoleum is that of Thomas, Earl de Grey, who died in 1848. The Earl's heir was his eldest daughter, Anne, Countess Cowper, who lived at her husband's house at Panshanger, Hertfordshire, rather than at Wrest Park, so the mausoleum was no longer required.

This is the earliest of the tombs in the mausoleum, and a fascinating family statement. The 6th Earl inherited an impoverished title, as a previous Earl had squandered most of the family fortune through lavish living and gambling. The 6th Earl carefully rebuilt the family finances. His will stipulated that his memorial should not only celebrate his achievements in life, but act as a reminder to future generations to mind their money! 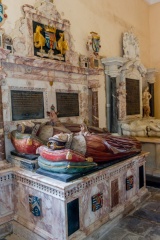 The 6th Earl and Countess 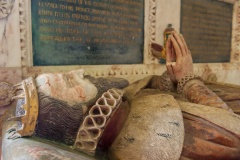 Set into the floor before the monument are grave slabs to Charles, the 7th Earl, and his son Henry, the 8th Earl.

The Earl (1594-1651) is buried with his wife, Countess Amabel (1623-1698). The monument is actually the Countess's work, erected after her husband's death. Earl Henry was a firm supporter of Parliament in the Civil War, and served as Speaker of the House in 1647. Amabel gained the nickname 'The Good Countess' for her efficient administration of the family estates. 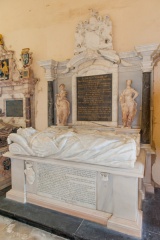 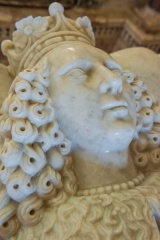 One de Grey is not buried in the mausoleum. Anthony, the 11th Earl, specifically requested in his will that he have only a simple gravestone, and his wishes were respected. His grave slab can be seen in the chancel of the main church.

Located on the west wall of the north transept arm is a striking memorial to the eldest son of the 1st Duke of Kent. Anthony died tragically at 27 after choking on an ear of barley. His early death left the Duke without an heir. The Earl is portrayed clad in Roman armour, lying on his side.

Near this memorial are others to his siblings Henry (died at 21) and Henrietta (died at 14). In the crossing chamber are monuments to two further daughters, Lady Amabel and Lady Anne. Amabel married John, Viscount Glenorchy, and her daughter Jemima became the de Grey family heiress. Lady Anne married into the powerful Cavendish family. 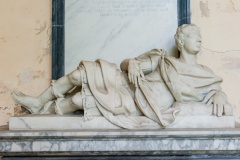 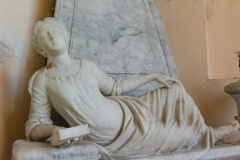 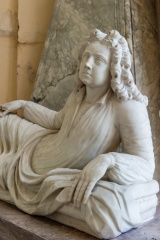 In the south transept are memorials to the 2nd Earl (1781-1859) and his wife Henrieta, along with 5 of their children. Thomas served as Lord of the Admiralty and Lord Lieutenant of Ireland. He was also the first president of the Institute of British Architects (RIBA). His architectural interest was expressed in 1831 when he tore down the old family mansion at Wrest Park and rebuilt in French Revivalist style. He also laid out the formal French parterre gardens near the house at Wrest Park. 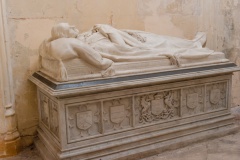 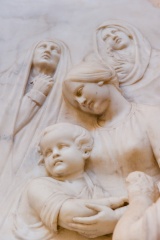 This grandiose memorial occupies most of the north wall of the easternmost chamber. Originally the 12th Earl of Kent, Henry had a long and highly successful career in politics, serving as Lord Chamberlain to Queen Anne. He was rewarded with a dukedom in 1710. He was responsible for enlarging the mausoleum and laying out the woodland garden at Wrest Park. His monument also commemorates his two wives. 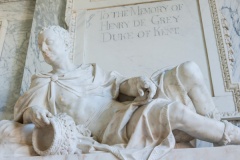 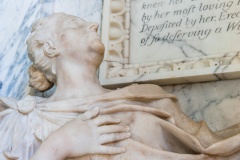 The Marchioness (1722-1797) is commemorated with her husband, Philip Yorke, later the 2nd Earl of Hardwicke. Jemima was the granddaughter of Henry, Duke of Kent, and inherited the Wrest estates in 1740. Though she is buried here, her husband is interred at his own family's seat at Wimpole Hall, Cambridgeshire. 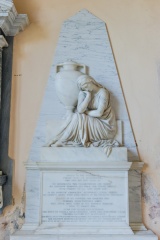 These are just some of the highlights - and believe me, there are many more. The De Grey mausoleum is quite staggering; surely one of the most impressive collections of family monuments in England.

The mausoleum is normally locked, and you must make arrangements in advance to obtain the key. At least that's what the English Heritage website says. We arrived in Flitton at about 4:30pm to see the church after a visit to Wrest Park. I hadn't arranged for the mausoleum key as I didn't think we'd have time to fit in the church that day.

When it turned out we did have time for the church I was rather cursing my luck. Then we read the sign in the church porch that didn't say anything about arranging in advance, it simply gave the phone number and address of the keyholder. We phoned, and as luck would have it, the keyholder was in. We got directions to her address and picked up the key. So despite the fact that we had not arranged ahead, we got to explore the mausoleum at our leisure.

And it is worth exploring. I've never seen such an extraordinary collection of family memorials. Any one or two of them would make a special trip worthwhile, but to have all the monuments in one place is truly something special.

Walking into the mausoleum is like treading on sacred ground; the space is light and airy, and everywhere you turn you glimpse a striking sculpture or intriguing historical bit of architecture. Aside from the sheer opulence of the tombs, reflecting the wealth and importance of the Grey family, the really striking thing is seeing how the tombs evolve from the painted Jacobean splendour of the first tombs, where the effigies lie flat in medieval style, to the later Georgian and Victorian effigies, which recline or stand, and emulate classical Greek or Roman sculpture. 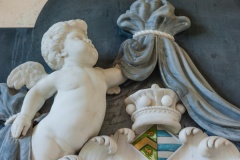 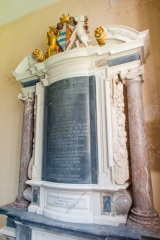 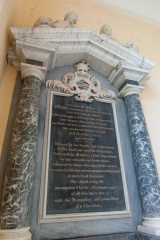