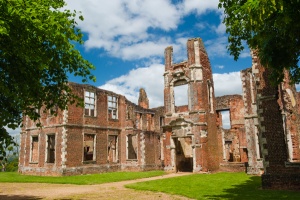 Houghton House, not to be confused with Hoghton Towers, is a three-story stately home built by Lady Pembroke, sister of Sir Philip Sidney, beginning in 1615. The architect is presumed to be John Thorpe.

Houghton is reputedly the model for "House Beautiful" in John Bunyan's masterpiece, Pilgrim's Progress. Given that Bunyan was a Bedfordshire native and used many real Bedfordshire locations in his work, this association seems probable. 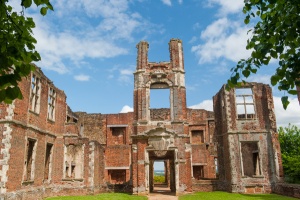 Incorporated into a grand frieze on the western front of Houghton are the heraldic devices of the Sidney and Dudley families. This frieze, one of the first examples of the emerging Jacobean style in Britain, may have been the work of Inigo Jones. Jones is also thought to be responsible for the pine-pannelled Haynes Grange Room, now exhibited at the Victoria and Albert Museum in London.

Lady Pembroke did not enjoy Houghton House for long. She died in 1624 and the property passed to the Bruce family, who held it until 1738 when it was sold to the Russell's, Dukes of Bedford (see Woburn Abbey).

The 5th Duke wanted to lease the adjoining hunting park to a neighbouring estate, however, he could not then legally rent the hunting park and house separately. The solution? Pull down the house.

In 1794 the Duke stripped Houghton of its furnishings and removed the roof. The park and house then became romantic landscape features for neighbouring Ampthill Park. The Earl of Upper Ossory, who owned Ampthill, brought in Capability Brown to landscape his grounds and incorporate the Herbert house.

Houghton is now a ruin, administered as an ancient monument by English Heritage. 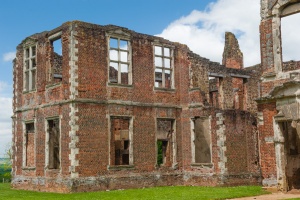 The house is built on a traditional H-plan, with projecting towers at each corner. The walls are pierced by large bay windows, a symbol of great wealth. There are two striking Tuscan loggias on the north and west elevations, and traces of what have been very impressive Rennaissance frontispieces on the other sides.

Curiously, though the main entrance is on the south front, the most impressive facade was on the north side of the building, where the loggia is decorated with carved friezes depicting family symbols of Mary Herbert and the Dudleys, her mother's family. Here you will see the Dudley bear and staff and flower symbols, plus the Herbert coat of arms.

Inside the roofless ruin, you can see where the great staircase installed by the Bruce family in 1688 once stood. The staircase, possibly the work of Christopher Wren, is now at the Swan Hotel in Bedford.

The house is fascinating. The sheer scale of the roofless ruins suggests just how impressive it must have been when first built. It is no wonder Bunyan used it as his model for House Beautiful! The location is wonderful, facing out over a wooded slope, with only a few stray cottages high above on the crest of the hill to distract your attention.

We did find the signposting for Houghton a bit underwhelming. We were left wondering if we'd arrived in the right place at first, as there is no obvious signpost after you turn off Hazlewood Lane.

In the end, we guessed that we needed to follow the lane left, parallel with the main road, and we eventually came to a small parking area. From there you walk past a row of cottages on your right and the house is visible down the slope of the hill to your left. 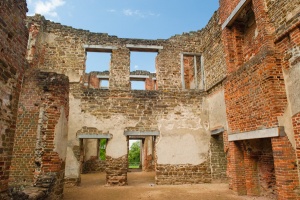 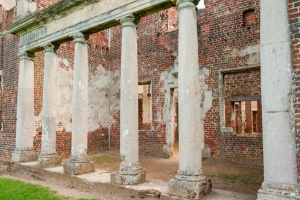 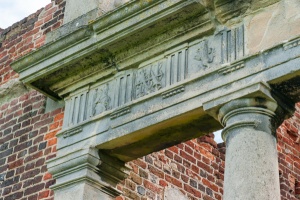 A decorative frieze on the west loggia 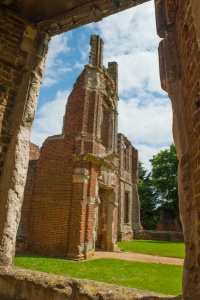 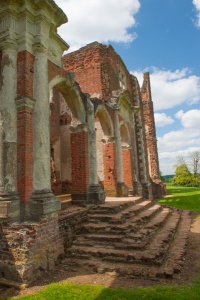 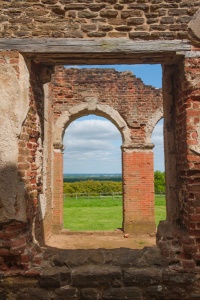 Looking north from
the Stone Hall

More self catering near Houghton House