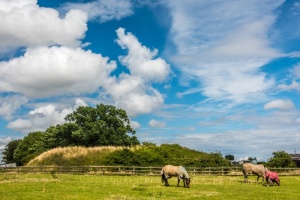 Remains of a medieval moated castle stand on a mound behind Toddington church. Local legends tell that a witch is imprisoned within the castle mound and that if you put your ear to the ground on Shrove Tuesday you can hear her cooking pancakes! One scientific explanation for the phenomenon is that the resonance of the ringing bells created a vibration that could be felt through the earth of the castle motte.

We are on safer historical ground when it comes to the origins of the castle; it was probably built in the 12th century by the Tracy family. In the 13th century Sir Roger Bigod, the powerful Earl of Norfolk, owned the Toddington estate. He leased the site to Sir Paulinus Pegure (modernised as Paul Pever). Pever, or Peyvre, was a royal steward in Henry III's household.

The Pever family held land in Toddington from 1198. In 1252 Paul Pever was granted the coveted right to hold a market in Toddington. He died 2 years later in London. According to his wishes, his body was buried in London but his heart was brought back to Toddington for burial. The heart is interred in a recessed tomb set into the wall of the south transept in St George's Church. The Toddington estate, including the castle, stayed in the family for the next 200 years.

Toddington suffered from an outbreak of the plague in 1362 when the manor was recorded as having a value of 12 pounds 12s 8d 'because all the tenants are dead'. The estate passed through generations of Pevers until it reached Henry Cheney, who was knighted at Toddington in 1562. Cheney was one of the peers of the realm to sit at the trial of Mary, Queen of Scots in 1586. He died without a son and the castle passed out of the family line.

There are two wide depressions encircling the motte. These were originally thought to be a pair of moats, however it now seems more likely that the outer ditch is actually a later field boundary. The inner moat is entirely authentic, though, and rather impressive, measuring some 30ft wide and 5-6ft deep. The motte stands 18ft above the moat bottom, with a level top about 92ft in diameter.

There is no evidence of stonework, and the only finds unearthed at the castle site are a few pieces of medieval pottery that are now held at the Luton Museum.

If you stand well back from the mound you can see what appears to be an outer bank and ditch, or earthwork, on the east and south-east side. This outer earthwork is probably not an original feature and is more likely a much later medieval field boundary.

There are no signs to help you locate the castle mound, but it really is very simple to find. The castle stands in a field just south-east of the medieval parish church of St George, off Market Square. Just go through the very obvious gate into the field, where horses graze, and follow either of two waymarked public footpaths.

One path runs along the west side of the castle moat and the other skirts the south-eastern side of the site. Both paths go very close to the moat and offer a very good look at the motte.

The width and depth of the moat are quite impressive and it is clear that the castle must have been very impressive before time and erosion filled in the moat and softened the contours of the motte. 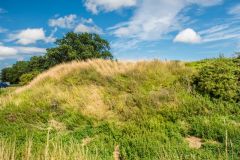 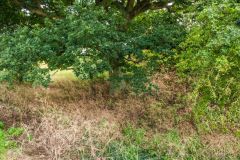 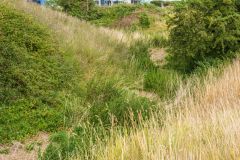 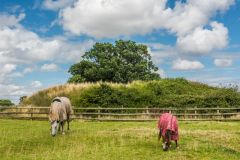 More self catering near Toddington

More bed and breakfasts near Toddington