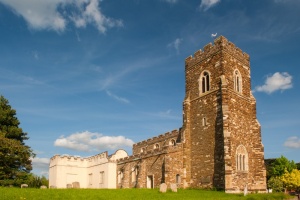 Flitton is really two distinct structures rolled into one. The familiar nave, tower, and aisles are there, built of brown sandstone. Added to this structure is the oddly white stucco chancel, built as a mausoleum for the de Grey family, Earls of Kent. The de Grey's lived at nearby Wrest Park, and the mausoleum contains memorials dating to the early 17th century.

The "ordinary church" is mid to late 15th century, with a three-bay nave and narrow supporting pillars, and is topped by a Perpendicular tower.

There are three medieval brasses of note. One is on the wall by the vestry and shows a headless female figure. The Latin text tells us this is Lady Alianera Conquest, who died in 1434. A small brass shield originally formed part of this memorial but is now affixed to the lower rood door.

On the north wall is a brass to Elizabeth Warren (d. 1544). This is a palimpsest, or reused brass, and originally occupied a recess in a nearby grave slab set into the floor. In the north aisle is a later brass to Alice Hill dated 1594.

Near the altar is a brass to Thomas Hill, who served the de Grey Earls of Kent. Hill died in 1628 at the ripe old age of 101 years. What changes he must have seen in that time! On the wall are further brasses to the Beaumont family.

The Beaumont family name lives on in a local legend. It seems that in 1751 an unknown highwayman was shot to death in Silsoe Lane. He was buried at the crossroads between Silsoe and Flitto, with an elm stake through his heart, according to custom. A tree grew from the stake, and according to locals, this tree possessed magical powers.

One custom was for people suffering from ague to drive an iron nail into the tree trunk with a strand of hair wrapped around the nail, just as the church clock struck midnight. Pieces of the tree, along with iron nails and samples of hair, are now in the Museum of Archaeology and Anthropology in Cambridge. The tree site is now marked by a plaque put up by the local heritage group. 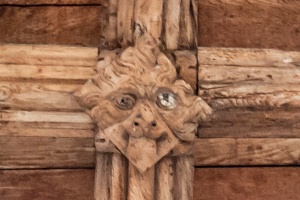 There are 7 roof bosses around the church depicting a Green Man. This 'wild man of the woods' is a symbol dating back to pagan times and is frequently found in medieval churches as a symbol of rebirth, fertility, and resurrection. The easiest Green Man to spot at Flitton is in the porch.

There are 2 more in the nave, another pair n the chancel, and 2 more in the north aisle. One of those in the chancel is located directly over the high altar. There is a similar grotesque carving in the south aisle but without foliage. This might be a caricature of the master builder or mason. One can only imagine the carver creating the caricature when the master builder's back was turned. 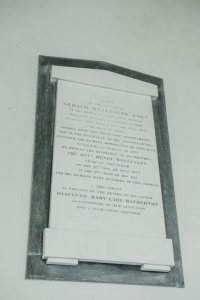 In the chancel is a marble memorial to Gerald Wellesley (1790-1833), nephew of Arthur Wellesley, Duke of Wellington, and brother of Henry Wellesley, vicar of Flitton from 1827-1834. Gerald Wellesley was the son of Richard, the 1st Marquis Wellesley, who was a career diplomat and soldier. Richard Wellesley was not exactly a stickler for convention; he had 5 children by his mistress, Hyacinthe Roland, then married her.

And then, if family letters are to be believed, almost immediately abandoned her. Gerald was among those 5 children born illegitimate. He served overseas with the East India Company for 24 years and died at Flitton vicarage at the age of just 43. His sister Anne was at the centre of a major scandal when she left her husband and ran away with Lord Charles Bentinck. She did eventually divorce her husband and marry Bentinck. 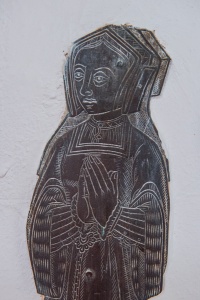 The church maintains a list of vicars dating back to 1261, but the first known vicar goes back still further to an unknown time when Henry Hattle was presented by the Abbess of Elstow.

William le Messag de Stamford was named vicar in 1346, but it seems likely that he lost his life when the Black Death reached England 2 years later.

But the most famous, or infamous vicar of Flitton was William Ramsey (1628-1664). Ramsey was summoned by the Committee of Plundered Ministers in 1645 but failed to appear. In 1647 he was accused of being a drunkard, and in 1655 he was thrown out of the living for refusing to adhere to the new forms of Protestant worship.

Ramsey was an obstinate man, however, and though he had no official standing he refused to vacate the vicarage. He was restored to his living in 1660 when Charles II returned to the throne, but just 4 years later he was thrown out of the church by force when his own parishioners refused to let him perform a burial service. 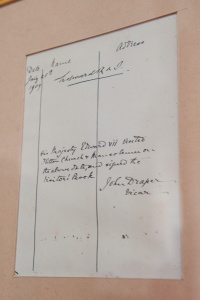 King Edward VII visited Wrest Park on 30 September 1909 as a guest of Mr Whitelaw Reid, the American Ambassador to the UK. The whole village turned out to cheer the king as he travelled through Silsoe to Wrest Park.

The following day was a Sunday, and the king accompanied Ambassador Reid to Flitton church. The vicar was away, and the curate holding service at neighbouring Ampthill, so the king explored the church and signed the visitors' book before returning to Wrest Park. A copy of the visitor's book page signed by the king hangs on the north wall of the church.

We've written a special page of detailed information about the mausoleum because there's simply so much to see. Here's a quick summary:

This remarkable family mausoleum is set behind a set of wrought-iron gates. The earliest monument is to Henry Gray (d 1545), but more remarkable are the later effigies in white marble of Henry, ninth Earl (1651) and his wife Amabella (1658). The largest monument is to Henry, Duke of Kent (d 1740) and his two wives. The Duke is portrayed in Roman dress, as is Anthony de Grey, Earl of Harrold (1726). The south transept of the mausoleum contains the later (Victorian) de Grey monuments. 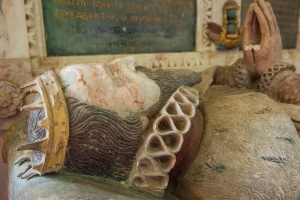 Henry, the 6th Earl of Kent 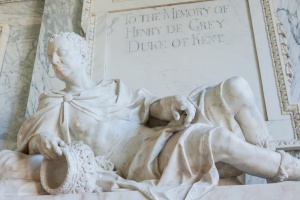 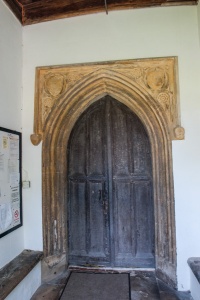 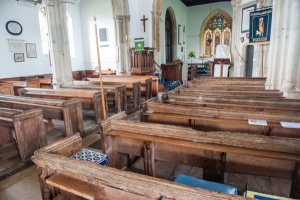 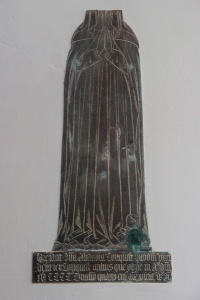 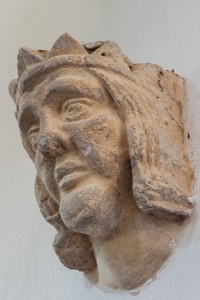 More self catering near Flitton

More bed and breakfasts near Flitton