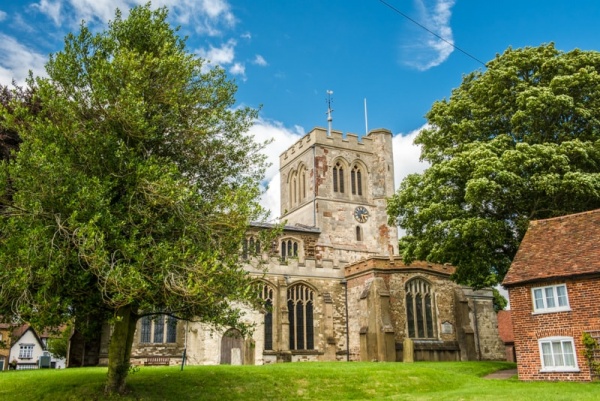 In the centre of Toddington village stands the imposing 13th-century church of St George. The origins of many medieval churches are lost in the mists of time but in this case, we know exactly when the church was consecrated; it was St George's Day, 1322, the same day that St George was named as the official patron saint of England, replacing St Edmund.

The consecration date hides much earlier origins, however, for it appears that there was a church on the same site in the late Saxon period, though no trace of that earlier building remains.

We do know that the 13th-century building was paid for by Paulinus Peyvre.

The exterior of the north wall has a frieze of animals and mythological beasts, carved in the early Tudor period. Among the carvings are a sow and pigs; which seems appropriate as the village pub, directly opposite the church, is named the Sow and Pigs. Whether the pub was named for the carvings ort the carvings were created after the pub existed is a matter for debate. 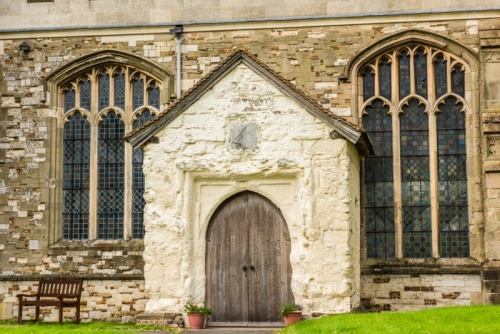 Among the other figures are a horse (possibly representing St George), a couple (probably representing marriage), a chained animal, a sheep, a grotesque lion with two bodies and one head, a gryphon, a cat, and a dragon. Other animal figures include a leopard with a helmet, a chained bear, a cow, and a goose.

One fascinating carving depicts a mermaid with a mirror, and two recumbent figures, one playing a viol. Perhaps my favourite is a depiction of the mythical Wild Man of the woods, a greenwood spirit clutching a rugged staff.

There are at least 46 carvings, and each is unique and probably symbolic to the people of that time. 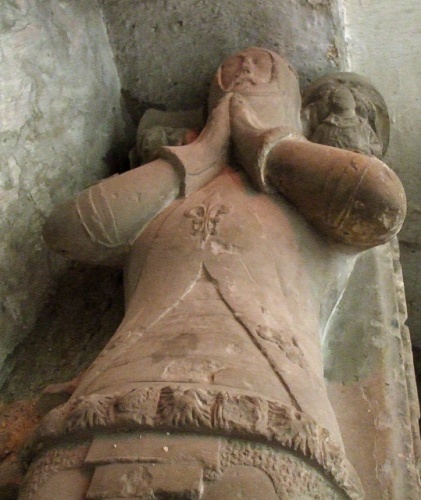 It seems clear that the frieze was carved to catch the attention of travellers along the main road through the village. Otherwise, why not continue the frieze around the far side of the building?

Over the north side of the chancel is a parvise; a separate room for the parish priest to live.

There are two side chapels with memorials dating to the 14th and 15th centuries. In the Wentworth (north) Chapel are monuments to the local Wentworth family of Toddington Manor, including Maria Wentworth and her niece Henrietta Maria, Baroness Wentworth, who was the Duke of Monmouth's mistress.

The Duke used to visit Henrietta at Toddington Manor and fled here after his role in the Rye House Plot was revealed. Henrietta later raised money to finance Monmouth's futile rebellion. 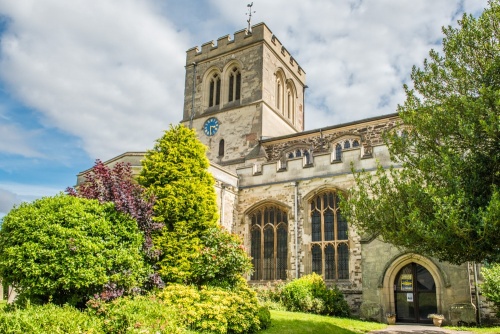 The church from the south

You can make out traces of medieval wall paintings, which are quite worn but are believed to show St Michael weighing souls and the Coronation of the Virgin.

The restored chancel roof dates to the 15th century, with tree-ring analysis suggesting a date around 1420. In the chancel is a memorial to Gylis Bruse, son of Sir John Bruse of Wenham. The younger Bruse died in 1595 while visiting his sister Alice, who was attending Lady Cheney of Toddington. In the chancel floor is a grave slab to Barbara Lambe (d 1683) and her daughter Elizabeth Marshall (d 1689).

In the south transept is an effigy of Jane wife of Sir Henry Cheney and daughter of Sir Thomas Wentworth, Lord Chamberlain to King Edward VI, who died in 1614. Nearby is an effigy of Dame Anne Cheney (d 1560) and the effigy of an unknown knight.

On the west wall of the transept are several fragments of memorial brasses dating to the late 15th century, probably commemorating a member of the Broughton family.

St George's Church is full of historical interest and well-deserves a visit. Don't miss the opportunity to see the ruins of Conger Motte (Toddington Castle) directly behind the churchyard.

The image of Thomas Peyvre is (c) Rob Farrow and is republished with gratitude under a Creative Commons license.