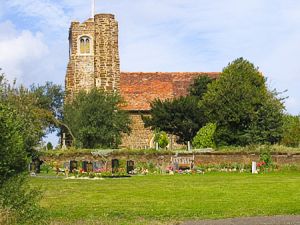 Lower Gravenhurst, St Mary's Church
A small country church built in the 14th century of local ironstone, St Mary's has a 15th-century tower. Unusually for a 14th-century church, we know from documentary sources who built the church and when.

The benefactor was Sir Robert de Bilhemore (d. 1361), who built an aisless chancel and nave. The inscription plate from Sir Robert's grave is set into the south wall of the chancel. Nearby, the altar table stands upon what appears to be a 13th-century altar slab.

Much of the fabric is unaltered 14th-century work, with the nave, chancel, screen, benches, and timber-framed roof dating from that period. There is also a plain south door of the same period, an equally plain 15th-century font.

The screen retains some painted panels on the lower sections, though the paint has worn from the upper sections. On the south wall of the chancel is a piscina a double sedilia, both likely 14th century.

Much later are the 17th-century pulpit and communion rails. Pride of place in the interior must go to the early 17th century memorial to Benjamin Pigott (d. 1606), featuring likenesses of the deceased with his three wives and 14 children!

St Mary's is no longer in use for regular worship and is cared for by the Churches Conservation Trust.