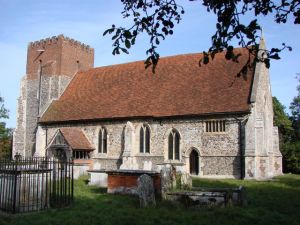 Little Wenham, All Saints
Standing in a rural setting beside a farmyard, the core of All Saints church dates to the 13th century. The 13th-century work was given the addition of a west tower in the following century and a porch in the 15th century. The top of the tower was later rebuilt in Tudor brick.

The attractive flint walls are original 13th-century construction, as is the tiled roof. You enter through the lovely wooden porch, with three attractive little wooden niches for statues over the entrance. I can't think of another church with wooden statuary niches over the door like this - most are in stone.

The most interesting features of All Saints are the early 14th-century wall paintings. These include a figure of St Christopher on the north wall, opposite the entrance. There are further quite wonderful paintings in the chancel, surrounding the east window. These are all, as far as we can tell, from the early 14th century; about 1310. Among the figures depicted are St Catherine, Madonna and Child, and St Mary of Magdala (Mary Magdalene).

What is immediately striking is the profuse use of pale blue, almost a turquoise colour, in the paintings. Most surviving medieval paintings seem to have a predominance of oranges and reds, but here the overall colour scheme seems to be pale blue and reds (though of course the colours have faded drastically over the centuries, and may have looked quite different in their original version).

On the chancel floor is a superb early 16th-century memorial brass to Thomas Brewse of Little Wenham Hall. Sir Thomas is portrayed in full armour, standing beneath a double canopy beside his wife. Beneath them are their five children. All are portrayed in wonderfully detailed Tudor costume.

To the south of the chancel is a marvellous and very colourful memorial to John Brewse (d. 1585). An effigy of Brewse kneels at prayer within a niche, under a classical pediment. The monument is covered with fantastically intricate heraldic devices portraying the Brewse family history.

Near the church is historic Little Wenham Hall, one of the oldest domestic buildings in England. The Hall, which is usually closed to the public, dates to the 13th century and features what is possibly the earliest use of bricks in post-Roman domestic architecture in Britain.

All Saints is now no longer in regular use and is cared for by the Churches Conservation Trust.

More self catering near Little Wenham, All Saints >>

More bed and breakfasts near Little Wenham, All Saints >>