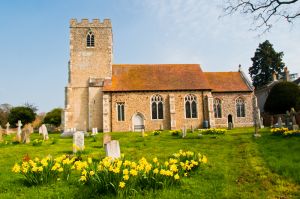 There was a church in the little Suffolk village of Higham at the time of the Domesday Book, and bits and pieces of that early church are incorporated into the current attractive building, which is primarily 14th-15th century, though the west tower is a century earlier.

Unusually, we may actually know the name of the craftsman responsible for some of the rebuilding; the north aisle, added in 1410, is thought to be the work of 'Hawes', a mason from Occold, who was responsible for similar work on the chancel arches at Bildeston, Debenham, and Otley churches.

At the west end of the nave is a Perpendicular font and nearby a large holy water stoup of similar age. The benches are Victorian copies of medieval originals, but four 15th-century poppyheads have been reused.

The Victorian theme continues with the lovely timber-framed chancel arch, decorated with delicate carvings of flowers and foliage. The chancel stalls are also Victorian and have lovely traceried fronts.

Much older is a medieval piscina set beneath a 15th century moulded arch. Above the piscina on the south wall is a memorial to Alice Dokenfield who died aged only 15 in 1622. The oldest memorial at Higham is in the chancel, where a Purbeck marble slab was uncovered during repairs to the floor in 2005.

The slab, with indents for brasses, is probably that of John Mannock of Giffords Hall (d. 1476). The church guide suggests that the missing brasses were removed by William Dowsing, that enthusiastic iconoclast, who visited Higham on 2 February, 1644 and recorded 'We brake down 15 superstitious pictures in the chancel; and 16 in the church, (so called); and gave orders to level the steps in 14 days'.

The most interesting feature to me is the series of carved wooden corbels supporting the timber roof beams. These are wonderfully unique, with facial expressions ranging from humorous to terrifying.

St Mary's is not the easiest church to find; it is not in the village itself, but down the road to Stratford St Mary, up the drive to Higham Hall. 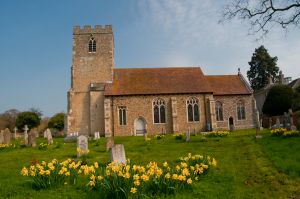